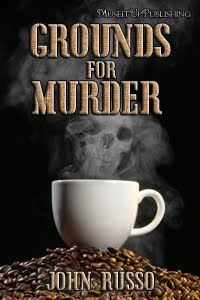 INT: Welcome to the Muse, Nora I understand that you have been involved in some sleuthing.

NORA: Yes well, I sort of got involved when a number of friends became ill with the same symptoms. It seemed more than a coincident so my curiosity got the better of me and I started poking around to get to the cause.

INT: Do you have any special training or a background in police work?

NORA: Oh my! Not at all. But I do read a lot. Mysteries are my passion and I’m a member of The New England Mystery Readers Club. I was even president last year.

INT: So because your friends became ill you decided to investigate the cause. That seems like a slim reason to get so involved.

NORA: That alone wouldn’t have peeked my curiosity but as I got more involved I discovered that a number of others in my Village of Eastport, were taken ill with the same symptoms.

INT: What made you finally suspect the coffeehouse was the source?

NORA: As any good investigator will tell you and it’s also true in all the stories I read,

When you interview the so-called victims a pattern emerges and that pattern pointed me straight to the coffeehouse.

INT: So you discovered the source of the problem, what then?

NORA: It led me to the culprit.

INT: Then you solved the mystery of who caused all the illnesses.

NORA: Yes, but it ultimately wasn’t the real crime, rather only the beginning of my further suspicions of a more sinister development.

NORA: Ah! But you’ll have to read the story to discover what I did.

Posted by MuseItUp Publishing at 10:13 AM

Welcome! I'm glad to meet another character from the MuseItUp universe!

Your story sounds fascinating. If I ever make it back home I'll have to grab a copy.

And I'll second the cover nod.

Drop me a note sometime.

Okay, I'm hooked, Nora! Putting aside that I love coffee, it sounds like my kind of read.

love the cover, love coffee. How can I do wrong?

I've heard its really dangerous messing around with people when they're indulging in that powdered caffeine stuff. I never understood it. I tried coffe once and it reminded me of my brother's gym socks. I can promise you Nora, my brothers had some really disgusting smelling gym socks, especially by the end of the shool year. Why is it guys never bring their gym stuff home until they can zombie walk home all by themselves?

Anyway, your cover IS fantastic and I love cosy mysteries too...it's one of my secret addictions...oops, I think my addiction is no longer a secret.

I'm going to have to check yours out if for no other reason than to see if I can match wits with you and figure out who dunnit before you do.

Love the cover and good cozy mystery. Looking forward to reading more about your adventures, Nora.

This is a great cover. I can't wait to read your story, Nora.

I love mysteries, especially cozy mysteries. I can't wait to read this.

The cover is great and i can't wait for the release count me in.

I soooo can't wait to read this book. I love coffee, I love mysteries. What a combo!

Fun replies, and I really liked your cover and sharp tease. Will look forward to your book's release. All the best.