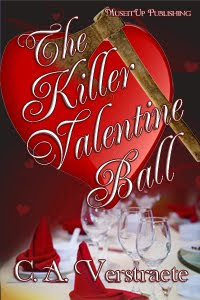 Jess was like any girl: young, pretty, looking for a good time. But... a blind date, and on V-Day yet? Can you say loser?

Jess thinks she's sunk to the depths, but her date, Dylan, isn't such a bad guy. Better than his Facebook pic, actually. A little Kid Rock, a little Depp. Some tats. Hmm.

He thinks she looks better than her FB mug, too. Maybe, just maybe, things won't be as bad as she expected. There might be a chance to resurrect the night. She'll ignore the fact the party's at a day camp. After all, every girl wants to go to a party she'll remember... a Killer Valentine Ball, right?

Of course, things happen when we get our hopes up too high. Murphy's Law always seems to kick in.

Then there's the theme, Jess thinks. The axe in the sign. A twisted Valentine legend about a girl finding her boyfriend with an arrow stuck in his heart. Playing it up kind of big, aren't they?

Looking around, she soon realizes things aren't at all like they appear. The dancers... those ribbons on the girl's dress...

As they walked into the shadows, Jess noticed that things weren't quite as they appeared. Sections of the room lightened for a moment before being cast again in deep shadow. What Jess thought she saw in that split second made her heart race. On the dance floor, the same three couples stood, clasped to each other. Jess stared. She swore they never moved.

The music played quietly in the background. When the shadows brightened, Jess caught a quick glimpse of one of the couples. The young man's mouth gaped open. His partner's gown glistened with streams of dark ribbons.

The light flashed again and Jess gasped. Those weren't ribbons! The girl's dress shone with dark glimmers. Like-like blood, she thought. No, it can't be! She looked back at Dylan, who shook his head and urged her on.

"Light tricks," he whispered. "It's not real. It's Halloween stuff, like the movie. Don't worry."

Okay, he had to be right. It wasn't real.

Nothing here was real.

** Christine Verstraete has written several short stories appearing in different anthologies and a children's book, Searching for a Starry Night, now on Kindle. Visit her at http://cverstraete.com or at her blog, http://candidcanine.blogspot.com.

Posted by MuseItUp Publishing at 1:00 AM

Email ThisBlogThis!Share to TwitterShare to FacebookShare to Pinterest
Labels: C A Verstraete, The Killer Valentine Ball