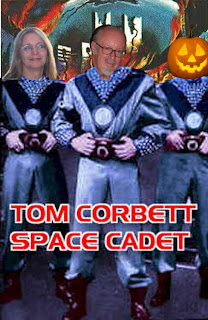 It has been a long time since I went out Trick-or-Treating. In truth, mostly I don't even remember what costumes I wore ... except one. On October 2, 1950, the TV show "Tom Corbett, Space Cadet" aired for the first time, and I was hooked. Not sure if it was that year, might have been too soon for them to get costumes out, probably it was the year after. My all time favorite Halloween costume was Tom Corbett. Is it any wonder that I write Science Fiction?

I wish I had a picture of my younger self in that costume. But if one was ever taken, it is long lost in all the moves I made, moves my parents made after my father retired, hopeless! I tried to reconstruct what it would have been, see the picture above, but I may have gotten a few of the details wrong.

Halloween isn't what it used to be. The kids go out saying "Trick or Treat" but all they expect is their blackmail payoff (in candy). They aren't thinking of "Tricks" and wouldn't know what to do if some curmudgeonly homeowner chose that option. Bunch of wimps! Back when I was a kid, we knew what to do ... and we by gosh did it!

Halloween used to be a two-night affair. We did tricks and treats. The night before Halloween was known in our town as "Goosey Night," while in the next town over it was "Cabbage Night." Bands of young thugs roamed the streets, and anyone who left their car parked outside was certain to find the windshield soaped the next morning. Houses were hit with eggs or TP, and various other mischief was perpetrated.

And then, after all this, we kids had the utter gall to put on costumes the next night, expecting to be given candy by those same people whose cars we had soaped! Yes, that was Halloween, not the lame excuse we have nowadays. Bring back Goosey night!
Posted by Jim Hartley at 12:01 AM

Loved your post Jim...especially the picture. I wihs I could have seen you and Lea prancing from door-to-door.

Oh my goodness I remember kids soaping cars (not me of course, I was an angel. Ha, bet if you asked my brothers and sisters they'd disagree.) I do remember going with my sister and brothers and putting eggs in people's mailboxes. You know the ones that opened into their hommes. Gosh that was bad and if anyone did that to me, I'd have a fit. But we did it all on Halloween night and I'm sure we didn't take the eggs from Mom's refrigerator. She'd have killed us. I do remember having an egg fight one year. It was on an empty lot and we hid behind fallen trees. Those were simpler times, weren't they?

Jim, you've reminded me of the 'good' old days. I remember going through different brands of soap to find the ones that were the hardest to get off windshields. Some of the older kids (I didn't go along with this) would go around and tip over outhouses. A fight erupted one year when one was overturned with an occupant inside. Yes, those were the days when the outhouse was common.
Ah, for the good old days!
Pat Dale

Lots of fun and love the picture. If you did that yourself, you're very good at it!

It's only in the last 10-12 years the night BEFORE Hallowe'en has become known as "Mischief Night" here in the UK.
Unfortunately, it's resulted in large gangs of feral youth roaming the streets, vandalising property, wrecking cars, committing MAJOR criminal acts. They feel safe in the knowledge that, id that seldom-seen person, a police officer, catches them "in flagrante delicto" (ooooh, I LOVE that phrase! lol) nothing will happen if the Thug insists that (s)he is under 18. And yes, the girls are as bad, or worse. THEY have an added advantage, of course; they can claim that
1) You're discriminating against me 'cause I'm a girl, or the worst case scenario:
2) "That pervert cop TOUCHED me ..."
Mischief Night in the UK is not (and never has been) an evening of innocent pranks and japes :)

Here we have mischief night the night before Halloween and I'm afraid the pranks are worse than soaping. Thugs go out and slash people's tires. Police are usually out in higher numbers here on mischief night.

We even had two years in nearby Camden when they set fire to much of the city on Mischief Night. It got so bad they had to ban it.

I remember Goosey night. As a teenager in northern NJ, I remember going out and egging houses, and using shaving cream too. When I moved to Calif., they didn't know what Goosey night was. I think it is also called Devil's night in other areas.

Love the pic, but hate Goosey night. Remember our house being egged when the kids were young.

Goosey night, huh? Never heard of it. I was raised mostly on military bases and my father would have been held responsible for anything like that so it never happened. But that's all right by me because I've never cared for vandalism any way.

Maybe we were just lucky when Dad retired because I never really saw anything more than pumpkins take damage (and I never appreciated that either.)