This is the intro to a new series I'm writing for our Tween market. You can see more of my Tween, MG and YA offerings at YellowHatWriter.com. 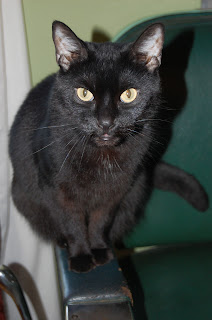 MASQUERADE the SCAREDY CAT
and sometimes Snort, too
I hate Halloween. I hate it almost more than cleaning the dustbunnies from under the furniture and mowing the grass every week. The only good thing about Halloween is it comes once a year and not once a week.
Halloween is horrible. It makes my heart race and hair fall out from the stress. Even my teeth ache for months ahead. I have nightmares starting the first of September, just knowing it’s coming. And I hate nightmares.
I didn’t always hate Halloween. I used to love dressing up in costume and running from house to house ahead of my parents yelling with joy at the bags of candy. But two years ago all that changed.
I’m Masquerade. This is my buddy, Snort. We’re supposed to be cleaning house, but I just saw the calendar in the kitchen and realized today is September 1st. So now all I can think about is how much I hate Halloween. Maybe hate is too strong. But I dread Halloween all year. It just starts to build into hate from the first of September until the day after Halloween. Then I’m fine for another year.
Oh, great, here come the dust bunnies again. I’ll just hold this dust pan in their path while Snort chases them out from under the furniture. Funny name for a mouse, huh? When we met I was about to eat him but he sneezed. I thought he was introducing himself so I stopped and told him I was Masquerade. Well, once we’d been introduced we were friends so I couldn’t eat him. Turns out, though, he’s allergic and sneezes all the time. His sneezes sound like he’s saying ‘snort’. So I got cheated out of a meal! But he’s been a good friend and helps with my chores to make up for it. We have a system worked out, you see. Being a mouse, he can scoot around underneath the sofa and chairs and beds much easier than I can. So I hold the pan open and ready to trap those pesky bunnies as he corrals them like cattle.
I’m guessing the dust bunnies think it’s a game. As soon as I toss them out the door, they scurry to the windows and doors and squeeze back inside through all the cracks in this old witch’s house. I’ve told Windy about it over and over, but she says she has more important things to do than chase dust bunnies, and gave me the job. I don’t know what is so important about sitting around all day watching television, but she’s a witch so I’m not going to ask.
Windy is what people around here call a helpful witch. She doesn’t hex anyone or use evil spells. She doesn’t even have a wart on her nose – although it is rather long and hooks down at the end. I guess that’s heredity. I wouldn’t know because I just met her about two years ago and her mother had died a few hundred years before that. It appears witches have very long life spans. 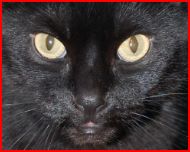 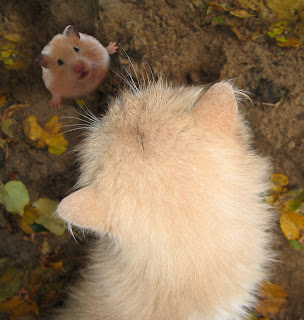 Great Halloween story! Thanks for sharing it.

I enjoyed reading this, Rebecca. Thank you for sharing.

I had a little black scaredy cat just like the one in the photo, although I'm sure she was never a little girl. I hope not at least. Sammy hated anyone strange coming to the door, so she loathed Halloween, too.