Here's the wicked conclusion to Shadow Trick or Treating.  Stay tuned because this afternoon sometime, I'll be posting some gory recipes and later this evening, when the full moon rises, and the creatures begin to crawl through the graveyard in back of my house, mwahahaha, I'll post a memoir story you won't want to miss.  No Baby Cthulhu's Allowed.  All true, all true...
Enjoy the conclusion here and don't forget to make your guess for the inspiration for Shadow Trick or Treating in the comments section.  I have a ghoul surprise for you.  You have until midnight to cast your votes.
Your hostess for today, Karen McCabre
Shadow Trick or Treating
Part Three

Mom killed a Shadow Man?  They Trick or Treat for children?!
I motioned for my sibs to come out and they climbed out of the gutter dragging their candy bags in the grass.  Michael lost a shoe somewhere and Ava’s trousers were covered in mud.  We’d find it in the morning, I told him and promised Ava I’d hide her from Mom seeing her muddy pants, evidence of the gutter.
“It’s ok to go in,” I whispered. “Mom got the one guarding the house.”  Ava gave me a funny look, but then she always did that.  There was movement in the trees near the back door, but it must have been the wind.  We bolted to the comforting light of the back porch.  Mom got there when we did, coming out of nowhere.  I didn’t even hear her turn off the car but I wasn’t thinking much about it then.
“Look! Here’s that Shadow Man.”  Mom kicked a big black pile of cloth on the porch and we stood there in shock.  Was it really dead?  It looked like it moved a bit so we ran screaming by it.
“We’ll just leave it outside for the Shadow Men to pick up.”  She said laughing.
Maybe she was making it up but sitting at the kitchen table in the kitchen light, we wanted to forget we had seen them at all.  I didn’t want to know how she killed it, I was scared enough.  We counted our loot and I got my share for standing watch on the rich street.  Three Baby Ruth’s from Ava, Two O’Henry’s from Michael and a pile of Tootsie Rolls and gum balls.  It wasn’t anything near what they got on that street but it was good enough for me.  I didn’t want to go Trick or Treating again for a very long time.
As we chomped our candy, Mom leaned over and asked for a candy bar.
“Doesn’t dear old Mom get some, too?  After all, I killed one of those creatures. “

We laughed…nervously.
“Aw, Mom, there’s no such thing as shadow men.  They’re ghosts.  We know you didn’t kill one, that’s just one of Dad’s old tarps for the tent.  You don’t have to kid us.”
“Is that right?”  She asked grinning.  She made us all some hot chocolate and put us to bed but before saying prayers with us, she ducked into her room for a minute and came out with a top hat on.
We laughed again…more nervously.
I slept through the night, walking to four hundred houses wore me out, I didn’t even dream.
Mom chuckled over breakfast.  “Darn old shadow men invade my neighborhood on Halloween, I don’t think they’ll do that again.” She left to get something in the basement, I forget what it was she said she needed.  I didn’t think anything of it…then.
We guffawed when she was out of hearing range.  Mom had really lost it, we told each other. Only kids see Shadow Men, right?  Since when do grown-ups play kid games?  Me, my brother and my sister looked at each suddenly, my brother’s mouth forming a perfect circle.  I knew what they were thinking, was it a game?  It was Mom who told us about them in the beginning, way back when...
We ran to the porch to see if the tarp was there.  It wasn’t.  Had the Shadow Men come for the body?  At least we didn’t have to call the cops to come get it.  We traipsed back to the table to finish breakfast when Michael dropped his fork on the floor and ran to the pantry to get another one.  When Ava and I heard the ting on the floor of another fork falling, we ran after him.  He was staring out the back window.  We joined him in time to see Mom dragging the tarp and the body out to our garbage bin.  I suddenly became aware of four little hands clutching my arms, two on either side of me.  We couldn’t move, not one of us.  We could only stare in shock. 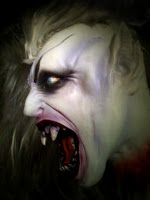 I noticed her scarlet mouth first and then her flattened nose.  Her skin was unnaturally white and her hair blew away in the November wind.  She dropped the body and ran after the wig.  For a moment she twirled her hands around each other in that weird sort of way.  I could almost hear her say something in that high pitched language and make those slurping noises through the window but I must have imagined it.  Then I saw the fangs, millions of them like curved jagged combs in her gums, on the top, and on the bottom.  One leg flopped out of the tarp and the Shadow stuffed it back in but not before we saw Mom’s favorite shoe on the foot.
Michael regained his speech first.  “We’ll pretend, ok?” he pleaded.  “We’ll just pretend we don’t know and maybe it will go away.  I mean, if we don’t say anything, it has to pretend to be our mom, right?”
Sheesh, little kids… “How long do you think it will do that before it eats us?  You heard it, this is Shadow Trick or Treat for them.  Look what it did to Mom.  You can stay but I’m outta here.  Grab the candy and run!”  I yelled.

All I know is I ran way past the seven blocks we were allowed to go in the neighborhood. At one point I turned around and my sibs almost knocked me down running into me.  Not bad for little kid legs, keeping up with me racing the wind, that’s for sure.  Never mind carrying those bulging pillowcases, too.  I figure that much candy will keep us for a week or two before we have to go home, we can keep watch from under the William’s porch.  Maybe by then the Shadow Mom will be gone... that is, if they haven’t taken over the neighborhood.
Happy Trick or Treating, everyone!  Beware the Shadow Men! 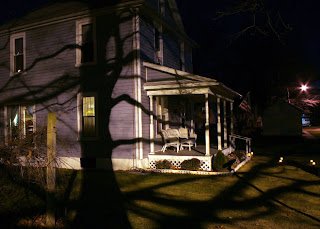 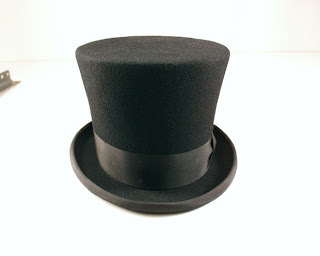 Yikes! What a story. I'd guess the inspiration was from a dream you had after eating a bunch of Halloween candy.

One of my teens read this and is now afraid to go in the basement!

I offered to go with her while twirling my hands in front of me but she declined. I think she's calling her dad at work... Lol! ;)

Be sure to leave your guesses in the comments section here or on any of the other posts for this story. You have until midnight! ;)

Oh my goodness. What a story!

Did you come up with this story from a nightmare you had? Or were you told about Shadow men when you were a young trick or treater?

Oooohhhh, that was good. Um, I already made a guess on the first post...can I guess again on this post? I'll just clarify my earlier comment. I think your mom used the shadowmen to get you home early from trick or treating.

LOL Karen, your hubby is probably shaking his head and twirling his hands. We won't mention the blood red lips or the comb teeth. It's dark now and I'm alone.

My guess is the inspiration came from "Dark Shadows"? Great scary story, absolutely loved being able to read it in parts, and not all at once.
joannereynolds@sbcglobal.net

After the first 2 parts I thought maybe Legend of Sleepy Hollow, because of the disguise and the element of keeping people in their boundaries. But after part 3...wow...who knows? Great story.

I did read a book about paranormal activity in Missouri where this couple was driving along the hiway and Shadow men chased them across the state. weird!

I think you conjured it up as you were nursing your bellyache after eating all that candy! That was a LOT of candy! Great story.

Wow!! What a crazy twist!!! Really great story and glad that my kids are all grown now and I don't have to do that Halloween thing anymore.:) I've never heard of the Shadow Men, but when I was a kid we used to be afraid of the Boogey Man.

Susanne & Cassie, I do usually write from dreams so you had good guesses!

Joanne, I LOVED Dark Shadows. It was my very first soap opera although I got in on it half way through the series. We used to fly home from school to watch it!

I'm watching the whole thing now on Netflix. The movie with Johnnie Depp as Barnabus is coming out next year!! Barnabus Collins inspired him to become an actor - both of them are such incredible talents.

Michele, I'd love to read that book! Lots of people have seen them and they all describe them the same way. Floating, black trench coats, white faces and top hats. Scary!