From ghoulies and ghosties
And long-leggedy beasties
And things that go bump in the night,
Good Lord, deliver us!
- Traditional Scottish Prayer

Did you ever wonder where Halloween symbols came from?

Most of them originate from the occult or dark arts (black magic). People have been looking for ways to deal with their fears, especially their fear of wicked spirits for centuries. Mythical creatures have become an important part on All Hallow’s Eve.
Many of the characters we see roaming the streets on October 31st used to be considered monsters and were feared by people centuries ago. Of course today’s costumes are more with the horror films or action heroes.

• Witches are one of the most popular of Halloween symbols. They’re scary looking with warts on their noses, usually green complexion and long, scraggly hair. They wear black pointed hats and are usually associated with black cats and broomsticks. While we find them amusing, they were once feared because they could cast evil spells, especially on Halloween evening. They first became a symbol in the 19th century. It was believed witches flew to an important meeting on their broomstick. Historians said witches flew used their broomstick to leap over large puddles because they had an aversion to water.

• Ghosts are thought to be souls of the deceased. Many Halloween symbols associate this holiday with the dead. Some cultures celebrate it as the day of the dead.

• Goblins were repulsive, frightening creatures. They are mischievous and evil and play tricks on humans.

• Werewolves are, of course, another popular symbol. They’re frightening monsters thought to be humans who become wolves when there’s a full moon.

• Vampires – dead people who rise from their coffins at night to drink the blood of humans to strengthen themselves. They only come out at night.

• Zombies were corpses who have been resurrected from spells of Witch Doctors or Voodoo spells.
Some animals are also symbols of Halloween:
• Black cats are, of course the most popular and are usually accompanied by witches. Black cats were thought to hold special powers.

• Owls are thought to swoop down and consume the souls of the dying. Ancients thought owls were an omen of death. Owls are a nocturnal animal with glassy eyed stares and this frightened people.

• Spiders are another popular symbol. Their webs inhabited haunted houses and symbolized darkness.

Not all people like to celebrate Halloween with the evil symbols of witches, ghosts, and goblins. Many associate it with the fall harvest. Some of these symbols are now part of Halloween also. 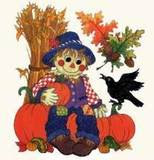 • Scarecrows are one of the most popular. They were really used to keep crows away from crops. But they might also have a connection to the occult as a symbol of a crucified man.

• Pumpkins – another very popular symbol - are usually carved. In fact today, many people have contests and pumpkins are elaborately carved. For those who celebrate the harvest, pumpkins symbolize plenty.

• Apples - since they are harvested in the fall, it was natural that they become a symbol. We associate apple cider, candied or caramel apples with Fall and Halloween.

• Candy corn -invented in the 1880s and shaped to look like a kernel of corn is one of the most popular candies at Halloween.

Many of the symbols of Halloween have become celebrated traditions.
• Bobbing for apples was probably the most popular game at Halloween parties. Apples floating in a tub of water are caught by contestants using their teeth to grab them. Easier said than done. This tradition was originally played by single men and women and the winner was supposed to be the next person to marry. Apples were symbols of fertility.

• Trick or Treating originated when people dressed up as ghosts to trick the real ghosts into thinking they were real. Today it’s a way for children to go door to door to gather candy.

• Carving pumpkins - was a tradition brought to America by the Irish. Pumpkins are carved into Jack-o-lanterns. The Irish believed Jack was an evil creature who, hopefully if he stole the light from the pumpkin, would leave people alone on Halloween. Some Irish people used to carve turnips instead of pumpkins.

• Decorating in orange and black is another tradition of Halloween. Both of these colors are associated with the occult, with black being a symbol of shrouds and death, and orange as the traditional color of ceremonial beeswax candles.

Today, people go all out decorating for Halloween almost as much or more than Christmas. Some symbols of Halloween used in decorating are head stones, skeletons, haunted houses – which have become enormously popular, mask – they’re supposed to scare away evil spirits, full moons, eyeballs and blood. 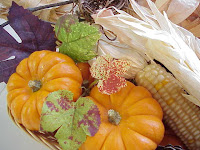 People who would rather celebrate the harvest or fall decorate with bales of hay, cornstalks, scarecrows, cornucopias filled with fruit or vegetables, wreaths of fall flowers, colorful autumn leaves and gourds.
Posted by Roseanne Dowell at 1:00 PM

Decorate for Halloween more than Christmas - definitely not this side of the pond! Most people I know hate Halloween except for confectionery companies. All those kids banging on your door demanding sweets - Aren't we a miserable lot?

Forgot to mention Roseanne.Your cover for Stranger On The Shore is beautiful

Unfortunately, I'm seeing more and more yards decorated with lights and the stores are full of outdoor decorations almsot as much for Christmas. It annoys me to see many of these same people don't bother to decorate for Christmas and I'm surpised at how many actually say Halloween is their favorite holiday.
Thanks for mentioning thecover. I love it. I'm waiting for another as we speak.