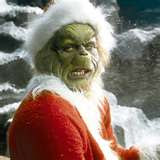 GRINCH: Hello bad boy. I dare you to fill out this blog interview. And for those of you who don’t read the opening credits, I’m talking with none other than… what’s your name again? Cyrus Keith.

What has been the nastiest thing you've done during the holidays...and be truthful...you know, Santa knows all...green Santa that is.

CYRUS: One Christmas (a lo-o-o-ong time ago)

CYRUS: I got drunk with my brother-in-law, and we hijacked a 7-foot Colorado Blue Spruce from a perfect stranger's front yard at 3 in the morning.

GRINCH: In your case I’ll hide you. Anyone that steals a tree is a friend of mine.

If you had a chance, which famous author would you bomb with snowballs and why? Don't be shy, answer the question, I don't have all day.

CYRUS: Okay, Stephenie Meyers for hijacking the most seductively evil character in literary history and making him *shudder* glimmer in sunlight. *Rushes off to do something manly before Twilight Fever sets in*

GRINCH: Wait. What kind of double talk answer is that? You like glimmer? Manly is putting on glue to slick back your hair.

What one gift would you deem worthy to steal from another? Why? Don't worry, the cops won't read this…yeah, right.

CYRUS: A 1967 Hagstrom Viking six-string, black with white binding. Because it will complement my collection of '74 Swedes so very nicely.

GRINCH: Yes, officer. I have his name and address…after the interview though.

Which of your characters do you think can duel it out with me? Bring them on, let them speak on his or her own.

"Now, wait just a New York Minute! *Hollers* Hey, Jonny-boy, we got us a gen-you-whine problem, here! You want maybe I should call Lennie the Face, or ya wamee to takediz guy myself? *At Grinch* Okay, ya knuckle-draggin' holidape! Why don' you take ya's heinie offamy premises beore I really get mad!

GRINCH: Yio, Cyrus my man, what language is this dude talking?

BUNNY: I will kick ya's keester back to Joisy wid ya dawg, an' ya sled, and ya costume! Ya's wanna mess up my Christmas cheer?

GRINCH: Christmas cheer is about the only thing I’ve understood so far. But go on, you’re making me laugh.

BUNNY: I'll take dat toikey sack in ya's hand an' put it where da sun don' shine! You'll be pullin' flannel out ta make room for da roast beast, got it? Or mebbe bettah yet, I'll hide ya's checkin' account so deep in da bank's hard drive, you'll need a Boy Scout ta fid it! I'll hack da FBI again an' make you Numbah One on the Most Wanted List! That's it! I don'need ta lift a finger, I'll kick ya keester with my processor! *Runs away laughing wickedly*

GRINCH: He runs away laughing? Wait…gimme a tissue, tears are stinging my

Back to you, Cyrus. From all the holiday dinner parties you've attended, what one dish makes you turn my favorite green? Why?

CYRUS: Anything with cottage cheese in it. Admit it, it's spoiled milk! I swear the Russians invented it to bring down the American Way of Life. It makes my liver quiver. It makes my spleen green, my bladder sadder. My colon goes bowlin' when I even think about putting that stuffin my face.

Do you have any...choke...holiday traditions?

CYRUS: I must confess. We sing. Starting on the 13th, we sing the Twelve Days of Christmas, with carefully choreographed, yet purely random motions.

GRINCH: On that note…

MERRY WHITE: On the first day of Christmas…

GRINCH: Where did you creep from? GRINCH: My name’s Grinch, not Nat, so don’t try your…NICENESS on me.

Cyrus, I’ll text you the map of all the big trees in your neighbourhood and maybe you and I can go hocking some spruce or fir or any other tree that will fit in that stolen vehicle of yours. Oh yeah…forgot…Yes, officer, his name is Cyrus Keith, residing at… 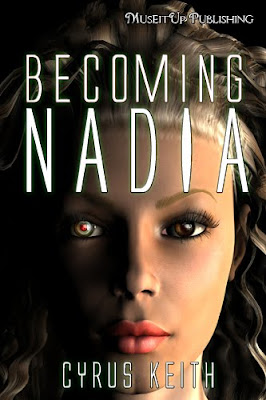 Man, that Grinch is merciless. Good going, Cyrus holding your own with him. Hero!

Way to go, Cyrus. You did a great job. What makes the Grinch think he can take us down any more than Bonella could. Ha,these are Muse authors he's talking to.

If Bunny writes a book, I'll buy it immediately. I won't understand a word, but I know it'll have kick-ass attitude.

*Skidding in* I'll help ya Cy! Hold on! Phew, I see you're still in one piece. Good on ya mate! LOL!

Way to hang in their, Cyrus. There would be nothing worse than someone turning yellow against the Grinch.

Whew, am I glad I'm not up for an interview. that Grinch is--what, is this going to be an ongoing thing that I might get into? Just in case, nice Grinch. lol