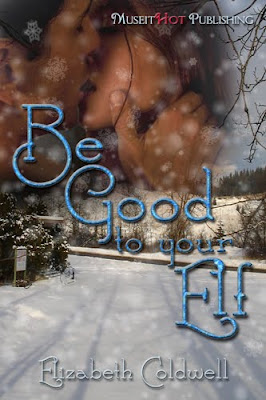 Be Good to your Elf by ElizabethColdwell, now available--sweet romance erotica


Grinch slabs some saliva on his hair, pats it down, and begins to interview his next victim, Elizabeth Coldwell, author of the romance erotica Be Good To Your Elf:

GRINCH: Be Good to your Elf...why? They're ugly creatures.


LIZ: You're obviously spending time with the wrong elves. Mine are cute, with wide eyes, turned-up noses and the sweetest pointy ears. And everyone needs some love and affection at Christmas, even you.


GRINCH: What a horrible thought. And here I slicked my greenery for you. Would you ever consider romping in the snow in your birthday suit? I've tried it and it's a 'cool' experience.

GRINCH: Hey, don’t knock the merchandise until you’ve seen it.

LIZ: No, when it's cold and snowy I prefer to be wrapped up warm somewhere, with a big mug of hot chocolate and a good e-book to read. I have made snow angels in the past, but they're probably
a bit too nice for your tastes.

GRINCH: Romance are for losers...I prefer dark fiction...have you considered writing dark fiction romance where the green man wins the gal? You know, I am a charmer when I want to be.


LIZ: If you really are Jim Carrey—

LIZ:..under all that green stuff, maybe we can discuss this further...But I did once write a romance story where a woman fell in love with her best friend after he came back from the dead, so if a zombie can find a girlfriend, then I suppose there has to be hope for you.

GRINCH: Dead girls don’t interest me. Have you ever considered wrapping coal as a gift? Wouldn't you like to be the fly on the wall watching your enemy open up their holiday gift from you? Come on...you must have thought of sending coal to someone. Don't give me their name but give me a scenario...put a green smile on my face.


LIZ: I try not to make enemies - as they say, you should always be nice to people on the way up because you'll meet them again on the way down.

GRINCH: Actually, I’ve met many on the way down…as I shoved them off their sleds.

LIZ: But there was one person I used to work with who was rather self-righteous and a bit of a bully to the staff who worked under him. It would have been fun to see him open his 'secret Santa' gift and get coal on his hands and on his nice, smart work suit. I think his staff would have certainly seen the funny side of it!

GRINCH: Now you’re back on my good list. What holiday song irks you and if you hear it one more time you'll bust the radio?


LIZ: 'When A Child Is Born' by Johnny Mathis. We had to sing it at a school concert one Christmas, and the lyrics are so sentimental it's like listening to treacle.

GRINCH: Do you think you have a character I can go one on one with? Bring them on. Let's see what they've got.


LIZ: Well, 'Be Good To Your Elf' sees the hero and heroine meeting in Santa's Grotto, so how about Santa himself? If his reindeer ganged up on you, you wouldn't stand a chance. You'd have hoofprints all over that rather cheap-looking Santa suit of yours, and your Grinchy backside would be glowing as red as Rudolph's nose!

GRINCH: For your information this isn’t a suit. It’s my body, but then so many make that mistake. As for Santa and his elves…my favorite entrée. How dark is your dungeon where you dream up these elves and other things for your books?


LIZ: Very dark - and very cold, given it hasn't got above freezing here in London all week. Don't worry, I haven't got anyone chained up down there at the moment, but all my wine is kept there, too, so if you find your way down there, keep your greedy hands off my Christmas Champagne!

GRINCH: Hold on a sec…you mean these bottles? The ones opened and now pouring down the toilet? I'd thank you for the interview but I'm not that gracious.

LIZ:You're welcome - may Christmas bring you everything you want, though you probably won't enjoy it when you get it...

GRINCH: Actually, my holiday has started suuuuuperbly interviewing you Musers. So don’t worry about me. Now go buy some more cheap champagne so I can clean my other toilet.
Posted by MuseItUp Publishing at 4:56 PM

Oh my, Liz, that Grinch...he's mean. You handled him well - impressive. I might need a lesson on toughening up for the likes of that green guy.
Hearing your bold statements to him - well, it reminded me of jingle bells covering up the sound of cracking ice (smile). Great interview.

Great interview! I was laughing the whole way through. Oh, what a Grinch...

Wow, Liz...you gave the green meany a run for his money. Good job.

one for Liz, zero for Grinch.