How not to make a fruitcake.

A few years ago, taking a wild hair, I decided to do some Christmas baking ahead of time. During the process it occurred to me how much I qualified to write a ‘how not to’ story rather than ‘how to.’ Using a quick bread mix, add nuts and fruit, how hard can that be? Ask me, I’ll tell you.
To begin, if at all possible do not open the cupboard of baking supplies you haven’t opened for a year because you’ve been too busy writing, editing, blogging and looping. Those bags of bread machine mix you haven’t used because the bread maker is still packed away somewhere after your last move have split from old age or been mouse nibbled (disgusting, and I had no idea the ones I put bait out had gotten in there) and the contents are in a layer on the shelve full of weevil skeletons (even more disgusting). Baking will be delayed for clean up. Baking will further be delayed for rearranging due to items thrown away.
Next don’t. In the essence of time don’t take out the largest mixing bowl you have and double the receipt unless you have arms-by-Arnold. Make a note, also, that just because it’s your largest mixing bowl that does not mean it will accommodate a double portion, and the result is slopped mixing.
Moving right along, the idea that mixing dry ingredients first, using the flour to coat and separate the candied fruit so it won’t be in a glob works nicely, but does have a major draw back. Candied fruit is sticky. Flour adheres to sticky. Flour after once adhering does not mix easily with liquid. It does make a nice soup. Arms-by-Arnold are again required to beat vigorously into the liquid, being careful not to slop said liquid out of the ‘biggest or not, it isn’t big enough’ mixing bowl.
After beating soup to an acceptable batter consistence, and your arm feels like it’s going to fall off, you will have a bowl heavy enough to require those arms-by-Arnold to lift and pour into the pans. Even then the batter will have a tendency to go wherever it wants to which is more likely to be the counter. Slight delay for another cleanup. A ladle will provide an alternate, though drippy solution, but a new situation arises. The original receipt called for one nine inch loaf pan. The fruitcake version called for a ten inch tube pan. If you don’t have a tube pan, do not assume a double version will fit nicely into three, nine inch loaf pans. If you do not have another loaf pan, two mini-loaf pans will do to hold the excess. Keep in mind, however, that half the size will not cook at the same length of time as the full size. Remember you will not be able to set the timer and wait. You will be checking constantly and also remember before peeking into the over to remove your glasses or fogging will occur to obscure your vision.
When removing the mini-loafs, the first to finish cooking, do not be surprised to discover the bottom sticks. There was a reason the grease and flour pan directions on the package did not include ‘or use spray.’ Evidentially the spray scoots to the sides and does not protect the bottom. Mutilated loafs are the result, and no matter how hard you try, you cannot scrap off the bottom crust and stick it back on the loaf.
Side-bar observation. It’s best not to time the removal of baked goods just before dinner. Testing to be sure they taste all right even if they do look awful tends to spoil your appetite.
Last, but by no means the least, do not sit down to write a silly story, burning the dinner you started and the last loafs. Take heart though, the burnt crust pulls loose from the meat of the loaf because it’s stuck to the bottom when you turn them because you didn’t grease and flour. You can cut what’s left into squares to serve with toothpicks, what I thought of doing, or maybe neat little squares in ‘nut’ cups. I didn’t, however, lock the fruitcake up. In a very short order, despite it’s unappealing appearance, within a few days there was not enough left, which goes to show that even disasters can taste good.
After this fiasco, had I had enough of experimenting? Certainly not. I’m an adventurous sort. Either that or a slow learner. This Halloween past I bought my granddaughter a pumpkin. It was her first visit to us, and I wanted to do some little things special to make her feel comfortable. She either wasn’t into Halloween or her parents forget. After they left, I had a pumpkin to deal with. Being the frugal sort and hating to throw away a perfectly good food source, I cooked and grated it. My thinking was I cooked, grated and froze zucchini squash, why not pumpkin? Squash is squash, right, whether orange and round or skinny and green?
For those who have never cooked and grated a pumpkin, you would be amazed at how much you end up with. I had 15 cups of prepared from one medium sized pumpkin. Oh, what to do with it. With just my husband and I the last few pieces of a whole pie usual spoil and have to be thrown away but wait—holidays coming again. Knowing how much my family like quick breads more than cakes and pies, I bought a packaged nut bread mix.—yes, again, to experiment with.
To the mix, after following the directions, I added:
1 cup of cooked and grated pumpkin
¼ cup of sugar (pumpkin without sugar tends to taste like mud, and no, I’m not going to tell you how I know. That would be a whole other story)
¼ teaspoon of pumpkin pie spice

After my experience with fruitcake, I did remember that with the added volume, the pan may not be big enough and used the largest loaf pan I had. If you go for the mini loaf size, I’d suggest dividing it equally between three rather than overrun two. The directions this time did include spray stuff for the bottom, but evidently pumpkin is stickier than plain nut bread. That’s what I get for following the directions when experimenting. Greasing and flouring the pan bottom is messy, but is a far better guarantee for ending with a whole loaf instead of crustless. The crust, however, makes a great snack and dinner spoiler. Just like the fruitcake, it looked like the end result of a food fight, but it tasted yummy.

Now I’m on a roll. There’s that two bag of apples someone gave me this summer, sliced and frozen in the freezer. Apple date, apple nut, and what would strawberries go good with? I may as well clear out the freezer by producing homemade goodies for gifts while I’m at it. Time and energy productive, but remember, grease and flour, grease and flour, and oh, yeah, check the new measuring cup you bought to be sure someone hasn’t made one in a cup and a half instead of a cup. That’s why my fruitcake was so soupy.

Larriane AKA Larion Wills, two names one author, thousands of stories will have her first release through Museitup Publishing in May of 2011 with White Savage. 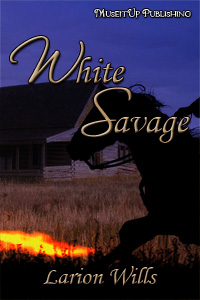 See my other books:

Thanks for an amusing story. You painted such a vivid picture, I could actually see the loaves stuck in the pans. Oh wait, maybe that's because it's happened to me, too. Seriously I enjoyed your humor and this blog very much.

You made me smile Larriane. I'm worried how those home made goodies gifts will be received, if you have the 'success' as with the loaves, but I'm sure they'll look lovely if you wrap them in cellophane. It's all in the presentation isn't it? Merry Christmas.

glad you enjoyed it. I'm one of those people who always feel like they're in a hurry, looking for the fast way, short cuts. I've had people tell me I have a strange sense of humor, but I learned early on to laugh at the mistakes I end up with instead of getting depressed. I'm better off for it. So when you're cake sticks, the cookies flatten, eat them anyway and laugh at how silly they look. You'll feel better.

I have had the same results from baking shortbread and gingerbread. I still keep trying.
Thanks for making me feel better about my attempts.
Happy Christmas

Oh Larriane! This was so funny and I identified with everything you said except the baking goods left in the cupboard. I go through ten pounds of flour a month in my bread maker. It's bad when your sourdough starter is older than your grandchildren. That might be another don't. Enjoyed your 'don't do' list -- I've completed the entire list at least twice!

I know what you mean, Rhobin. When the kids were still home, I baked all the time. Believe me, Hubby and I don't need the sweets. lol. And Rosalie (that was my great grandmother's name, btw) I still experiment. The latest was a quick German chocolate cheesecake. When you add chocolate syrup to the cheescake mix, lessen the amount of milk accordingly or you get a very rich soup. lol.

I've had some cooking disasters along the way, but many success stories.