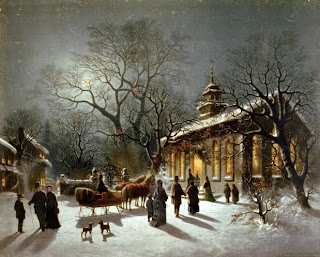 For the past several years I've made it a tradition to post this particular short story of mine because it brings out so many emotions in me. I hope you enjoy.

Such a sweet story Lea. The truth of Alzheimers doesn't always have a happy ending. Your story is beautiful. It cherishes the memories and the moments of clarity.

Such a beautiful story about the realities of Alzheimers and the pain of living with someone who has it. So bittersweet when the clouds parted and mom's memory returned. I had tears in my eyes at the ending. I see why you post this every holiday season. It exemplifies the true meaning of the holiday - love and peace.

I'm touched. Misty eyed. I loved my mum too, but she was remote from me in a different way.

Beautifull story. It brings home to me the downside of moving to another country. My mother has Parkinson's and I wish I could be nearer.

Very touching story Lea, brought tears to my eyes. I thank God that my parents both died before this horrible disease overtook them.

This story really touches a nerve as I just found out a close friend's father died a few days ago of a dementia-related condition. The thing that's comforting her is the last time she saw him, he was lucid enough to tell her he loved her - and in the end, that's what really matters. My thoughts are with her and everyone with a parent suffering the same disease.

Beautiful, touching, emotional story. I felt Maria's pain at seeing her mother like that. You painted a very visual picture of the setting as well as the emotions inside Maria. Thank you for sharing it with us.

very touching. A friend whose mother had Parkinson's told me during one of her mother's lucid moments she told her, 'These were supposed to be my golden years.' It is so sad in what those diseases rob not only those taken by them but their family and loved one.

Lovely story Lea. I've often thought one of the sadness things, would be the inablility to recognize my own kids and family. This story helps us remember what is really important this season. Thank you!

Wow! That's really lovely. Any woman who loves her mother can appreciate it.

Lovely - brought memories and tears. Alzheimer's is tough, a slow loss of a loved one (sometimes years). I lived for those lucid moments. Bless you for sharing.

Very touching. One takes the memory for granted and how very precious it is.

Very Poignant. Near the end of my Dad's battle with Alzheimer's, he couldn't speak. However, the day he passed away, my mother heard him say over and over, "Honey, Honey," She went right to his side, "Pretty Lady," he said weakly, "I love you." That evening he was with God.

Thank you for sharing this. It brought back that memory of the gift of a moment of clarity before departure.

Dang you Lea, you made me all weepy. That is a wonderful story. It's amazing how much emotion and character you brought to it in so few words. It's lovely. (But, I hate getting weepy.)

My husband's grandma is in a nursing home, and isn't speaking now at all-she does smile and laugh. We go to visit with Chuck's mom, who is the only one she's really comfortable with, and seeing the way his mom is so patient with her mom is amazing, but it's sad for everyone too.

You took me back to the hospital room when I was eleven the day my Grandmother passed. Nonnie did not recognize her daughter, my Mother, but for one moment, Nonnie's fog cleared when I stepped in to see her. Her eyes focused, she said my name, and told me she would always love me. Twenty minutes later, she passed. I miss her every day, but her last words are forever engraved upon my heart.