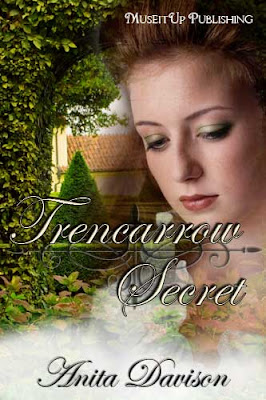 Trencarrow, the Hart family's country estate near Penzance in Cornwall contains two nemesis for twenty-year-old Isabel Hart. The lake where she nearly drowned four years before, and The Maze in the gardens of the elegant Queen Anne manor house.

It’s the summer of 1882, and with her forthcoming engagement to her childhood sweetheart imminent, Isabel attempts to put at least one of her fears behind her. However, when she summons the courage to venture inside the maze, she sees something she didn’t anticipate.

As other family secrets are revealed, Isabel is faced with the fact her vibrant, beautiful mother is desperately ill and her cousin, Laura, has developed a clandestine attraction to an enigmatic young man.

Isabel's growing doubts about her fiancé are exacerbated as she finds herself attracted to Viscount Strachan, one of her father's houseguests. Isabel discovers the lives of those around her are anything but ordinary and that her destiny lies in her own hands.

Will she see her way through the maze her life has become, or will she be driven further into her own world?

I've had the distinct pleasure of critiquing this book, and I can tell you it's a pleasure to read. Anita will draw you in with her awesome descriptive talents and move you right to Trencarrow. I always thought I'd hate anything written about English history, but I was soooo wrong. Anita will hook you; I guarantee it.

As for the cover...Delilah has done a great job of capturing yet another story. Two ladies have combined their talents to showcase an awesome read. Dive in.

Wonderful synopsis. Love the voice and can't wait to see it published! Most Excellent. Congrats. And a beautiful cover to boot. Way to go Deliliah. You up to September books yet? I'm super anxious... ;-)

Anita has a magic way of transporting you into the world she creates. Can't wait to be transported again.

Aww I'm getting all emotional here, thank you all so much for your lovely comments. Isn't the cover beautiful and so evocative of my heroine, Isabel. I hope some of you get to love her too, and of course Ginger helped me develop her story too! Someone should make her an editor!

Delilah, this cover is gorgeous!! Anita, when is your book coming out? I can't wait to read it after I read the synopsis.:)

Excellent cover, ladies! I'm so excited about this book and I love the look on Isabel's face - it's perfect.

Anita, lovely cover, so demure and alluring (smile - Delilah is awesome after all) - the blurb is perfect, family secrets, yummy stuff.
Congratulations Anita!

Anita I look forward to reading what sounds like a wonderful story!
The cover is lovely!