Hunted, Haunted, Homesick. How did Caleath get in this mess? 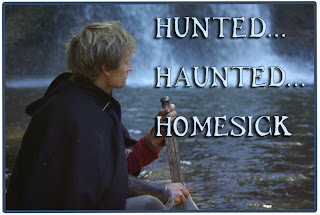 We spoke with Gwilt, from 'The Chronicles of Caleath' 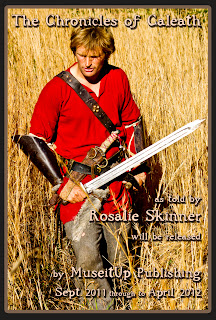 Somehow I don’t think he
would have altered his actions.
When September comes you
can read his story and decide for yourself.
Keep up to date on publishing progress
Ramblings from Lady Rosalie
or
The Chronicles of Caleath
Posted by Rosalie Skinner at 7:00 AM

Really awesome. I can't wait to read it.

Wow! I worry for Caleath and his dangerous journey, and I really like Gwilt.

I'm wondering where he came from and hoping he will survive the situation in which he is in now. I'm looking forward to reading more.

Caleath sounds like a mysterious and fascinating character. I can't wait for the release of these books!

Thanks for your comments. I read them to Gwilt. He said "If you want to hear more than the minstrels tell in their ballads, meet me in the Fisher's Catch after dusk. I can tell you what happened... to, around and because Caleath arrived on my shore. It has been an adventure being swept up in his wake and for the price of a drink my memories can be your memories. Just don't let Caleath know. Agreed? He'd be seriously narked."

I think, just quietly, it's probably a better idea to wait till September. It's not really that far away. Thanks for taking the time to read Gwilt's post.

Rosalie, beautiful description and rendering of Caleath's character, and his motive. Looking forward to reading your series!:)

I can't wait to read Caleath's story in September.