I'm Jax from World of Ash 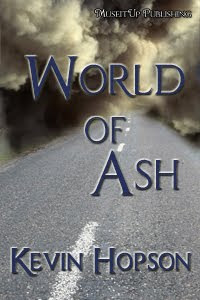 My name is Jax, and I star in World of Ash. The author, Kevin Hopson, paid me $1.5M to be in his book. Unfortunately, he has only made a few bucks from this story, leaving him significantly in the hole. It is not my concern, though. I got paid, and I earned every cent of it, so now he has to figure out a way to make back his money and more. As we characters like to say, “Marketing is something for the authors and publishers to do.”

Critics might think I was overpaid for the gig, but consider the following before making a decision. For one thing, I was thrown into a “World of Ash” for crying out loud. Have any of you experienced a setting like this? I highly doubt it. Try sucking in sulfur on a regular basis. It will make you want to vomit. Additionally, the ash is extremely abrasive and can irritate your eyes and lungs, hence the need for protective goggles and air filter masks. You can kiss most electronics goodbye, too, including car and plane travel. Throw in an irritating friend to accompany you on your journey, like my buddy Stu, and you are asking for hell on earth.

Maybe I am being a little rough on Kevin. He was nice enough to offer me a follow-up role in his first full-length novel titled Planet Ash, which is based on the original World of Ash story. As a result, I should probably cut him some slack, especially since we are still in negotiations over pay. I cannot provide any details right now, but it is safe to assume I will be demanding much more this time around. A full-length novel will require a significant amount of my time, and no one can play Jax better than myself. I dare the critics to prove otherwise.
Posted by Kevin Hopson at 9:00 AM

Interesting character. Love the idea of sucking in sulphur NOT!! Great post Kevin.

Humorous post Kevin! That's fantastic you've decided to do a full length novel. I will have to check out your story when I get my ereader. I know, I keep saying that. I just need to go buy one:)