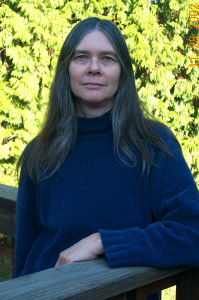 Greetings fellow musers.  I am both an editor for MuseItUp and an author.  I've been with MuseItUp since the beginning, working as an acquisitions and line editor.  When it came time to submit my own work for consideration, I had to go through the same process every other prospective author does.  I submitted my query, synopsis, and manuscript.  Everything I have submitted has not been accepted, which goes to show the editors here at MuseItUp are picky!  They only accept work which is tightly written, has an interesting plot and characters, and will hold a reader's interest.

Like many other writers, I've been writing since I was a kid.  I would entertain myself by writing stories, illustrating them and binding them into books.  When I wasn't writing, I was reading.  I continued to pen stories into high school and convinced my senior English teacher to let me write a novel instead of doing homework assignments.  Unfortunately after graduation, life got in the way and my writing career was put on hold until 1993.

While I read all kinds of stories as a kid, my adult reading tends to lean toward fantasy and science fiction.  When I write, I enjoy writing for both adults and children, and I write both fiction and non-fiction.

My favorite genres tend to be what I enjoy reading, so I do write a lot of fantasy and soft science fiction.  That said, almost all of my stories include a male and female protagonist who have a relationship.  Because I do this, I generally include some romance in the story.  I like exploring the "what if" of a potential story idea and allow my characters to take over once I sit down to write.  The style of writing I do is often referred to as being a "pantster," or writing from the seat of one's pants.

My previously published pieces (besides short stories and non-fiction articles) include a middle grade paranormal novel, Ghost for Rent, an illustrated chapbook, Dragon Sight, and my just released collection of short stories, A Past and A Future.  I have also had stories included in three anthologies and numerous small press genre magazines.

I am under contract with MuseItUp publishing for two romances.  The first, Love Delivery, is due for release August, 2011.  This story explores the relationship between Anne and Tom.  Anne works in a donut shop and Tom is her delivery man.  While Anne is interested in Tom and Tom in Anne, cats, an evil ex-wife, and an adorable child, create obstacles they must overcome before a relationship can work for them.


The second,coming in November, 2011, Lady In Waiting, is an historical romance set in a time when princes and princesses lived in castles and traveled by horse and carriage.  Here we find young  Mabriona, a lady-in-waiting to her cousin, Princess Alana.  Mabriona is attracted to her cousin's betrothed, Prince Blayne.On the way to Prince Blayne’s home, a tragic accident occurs.  Their carriage overturns and rolls down an embankment. Alana is killed, Blayne is injured, and only Mabriona is able to call for help.  Unfortunately, everyone at Blayne’s castle believes Mabriona is actually his new wife, Alana.  Although she tries to rectify the misconception, it isn’t until Blayne awakens from his coma that the truth comes out. As he recovers, Mabriona learns Blayne may not be all she thinks he is, and his handsome younger brother, Madoc, may be the better choice.
I also have four children's books scheduled for publication over the next five years with 4RV Publishing--Funny Dog, Many Colored Coats, and Boo's Bad Day are all picture books, and Ghost for Lunch is the middle grade sequel to Ghost for Rent.
You can learn more about me and my work at my web site http://pennylockwoodehrenkranz.yolasite.com and my blog http://pennylockwoodehrenkranz.blogspot.com
My advice for new writers is don't give up.  Believe in yourself and submit your work when it is the best you can make it.  Remember, a manuscript sitting on your computer hard drive or in a file box on your shelf will never be published.  There comes a time to stop editing, stop taking writing classes, and stop reading books on becoming a writer.   Happy writing to all.
Posted by Penny Lockwood Ehrenkranz at 5:00 AM

Wow, Penny, you live quite a busy life and wear many hats. I too am a panster. Tried plotting and outlining once. NEVER AGAIN and I don't say that often. In fact, I've learned not to say never. But I can guarantee that Never! Congratulations on your upcoming book. They sound fascinating.

You are one busy writer, Penny, and I like your approach to writing. To me, there is no story without the "what if" factor. Congrats on your forthcoming releases!

See you on my blog on 2/2 for your book blog tour!

@ Roseanne, I also tried outlining once as part of a workshop assignment. I just couldn't do it. My outline consists of scrap paper with a note saying Chapter 1 - Wendy meets ghost...
@ Pat, thanks. I think a lot of us start with the "what if." We all seem to come up with a different answer, which makes for a lot of fun stories.
@ Marva, I'm looking forward to it.

Lady in Waiting sounds pretty awesome. I love historicals. Certainly sounds like one heck of a complex adventure for Mabriona.

Great advice for all writers. I myself can't say it enough. If you want to be published, don't give up!

Lindsay, thanks. Hopefully you'll get a chance to check out one of my romances.

Penny,
I can't wait to host you on my blog on 2/6 for your book tour. The amount and variety of your books are impressive. Your advice to new writers is what I would tell them too. Persistence is probably the most important part of being a writer.:)