Since Rael inherited the Hive planet and more responsibilities than even his customized support system can contain, we don’t get to visit much any more.

Strangely enough, I’m pretty much serving the same function as when we first met; a last line of defense for the most powerful man in the universe—though now I'm more a redundant backup with Gabriel and all the Archangels always at his side and in his head. (Telepaths creep me out.) But I retain my autonomy so, unlike them, I’ll never jump out an airlock just because Rael orders it. He counts on this and the fact that I’ll do whatever needs to be done, no matter what the cost.

Just now, I’m feeling the need to consider my options. Whenever I get like this, I leave Seraphim and get some alone-time staring at the stars or Rael’s giant mothership from the bridge of the Nemesis. Rael doesn’t think anything of this any more. He assumes I’m restless or just keeping my skills honed. I’ve even invited him to join me in some weightless war games. I’d like to show him just how much more interesting combat can be in a room full of not just floating furniture but a full size carpet—makes me smile. Maybe I’ll trick Ira into joining me sometime too. He’s been under a lot of pressure lately.

At any rate, as I sit here aboard the Nemesis: adrift in silence amidst an eternity of stars, I find myself strategizing. Though the universe is vast, it is hard to fathom how our special dark ops team could ever have come together without design. The Oracles have successfully ensnared Rael; pinning him to a power he dare not wield against them. They’ve entwined lonely Ira with Tristen though she’s one of their own. But at what a cost? She was chosen, surgically blinded as a child, then re-engineered before being set adrift to end up at the mercy of a slaver who, strangely enough, owns a mountain with a portal....

What a delicately woven web they’ve designed. Its construction has spanned hundreds of years. But I know there has to be more to all this. What are they up to? Galactic conquest is a good probability. All the pieces do seem to be cascading into position, but Tristen claims she is destined to help save their world. How does their world factor into all this?

Rael believes I alone am not a part of the Oracles’ plan. Their manipulative measures had been meant to secure a conjurer, but Rael chose me instead. So here I am, a man among supermen—the fly in the ointment. I like the sound of that. And as I watch my team members, my friends, being moved into position like chess pieces on a board by these bastards, I'm thinking maybe it’s time for me to step in.... 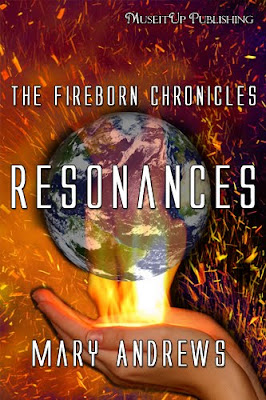 sample chapters & more info at
http://mary-andrews.webs.com/
Posted by Mary Andrews at 4:32 AM

Mary the world you've built sounds fascinating! Guess I'll have to read your book to find out more:)

But wait, there's more...more planets, more characters...more strange and wonderous twists and turns...a whole universe worth. (Because I believe in trying to give my readers their money's worth. Let me know if I miss anything.)