The Musings of C.K. Volnek 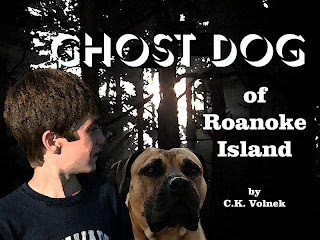 My name is C.K. Volnek, writer, Author and Story Teller.

There was a time when I was a second grader when all I wanted to do was draw bunnies. Bunnies eating, bunnies sleeping, hopping, smiling. Why? Because of a book. The Velveteen Rabbit.

Then my passion matured to horse stories. I read all the Black Stallion books, Black Beauty, Misty, etc., reading so many books I won the coveted reader award at our local library.

And today, my passion for middle-grade, tween and young adult fiction is still strong. I love a good story that weaves around a young protagonist, watching him or her grow, whether it be emotionally, in maturity, or humanity.

My first fiction novel, Ghost Dog of Roanoke Island, will be released in September, 2011, by MIU Publishing.

But, enough about me, there’s someone else here that would like to introduce himself…

I’m almost 13 years-old. I like to remind my dad of that. He treats me like such a baby.

My dad moved us to this beach house on Roanoke Island about two months ago from Ohio. I wasn’t too happy about leaving the only home I’d ever known. But Dad had been out of work for over a year there. So when Great-grandma Ellis left us the house on Roanoke Island, Dad went to scope it out. He found a job in nearby Manteo and that was all she wrote. He up and moved us, not even asking if it was okay by me.

I can’t say I like Roanoke Island. None of the kids at school want to have much to do with me, always teasing me about the creepy Ellis house. They say it’s haunted. The beach house is pretty run down and Dad is either at work or working on the house. Never has any time for me. He won’t even let me go exploring the woods or the bluff ... not since Kimmy’s accident.

Kimmy’s my little sister. She’s six. She’s in the hospital after falling off the bluff and hitting her head three weeks ago. Dad blames me for her accident. I’d do anything to take it back. I didn’t know she’d followed me up there! But Dad blames me for it. Guess he’s right, because I wasn’t supposed to be up there in the first place.

Mom has been with Kimmy since she fell. I wish she would come home. Seems like I’m always in trouble with Dad. He’s so mad at me. He promised I could get a dog when we moved to the island. But he hasn’t mentioned it since the accident. But I’ve got to find a way to make him let me keep that big Mastiff I seen on the bluff. That Mastiff must need a good home and he’ll be a great dog to have around. He already saved me from whatever that thing was I came across in the cave.

The kids don’t seem to want to know me, but I did meet Manny, a 30-something Native American Indian. He’s really cool. He’s going to teach me how to whittle. He also seems to know what this creature is from the cave and said he’ll help me figure out how to stop it.

Manny says that thing is an evil creature conjured up a long time ago, from when the first colonists landed on Roanoke Island in 1587. I learned that 117 colonists disappeared back then...disappeared without a trace. I think this creature has something to do with it.

Manny says I am the only one who can stop this thing. I have to find out why. But first I have to figure out what it is and why it’s here. It’s pretty scary but if I don’t stop it, it will continue to haunt the island and kill more people.

Maybe if I can stop it, Dad won’t be so mad at me about Kimmy’s accident anymore. It could show him I’m responsible and grown up. I’ve got to stop it...before it stops me.

Thanks for stopping by! Jack and I hope to see you all soon.
C.K. Volnek
Posted by Charlie at 12:14 AM

This means, you understand, that instead of 57 cover blogs I need to do JUST to catch up, I actually need to do 58!

September? I didn't know the covers were that far along... how many OTHERS have emerged during my obvious Rip Van Winkle phase?

Your posting has me chomping at the bit now..which is a really good thing. It's never a bad thing to have the world eagerly awaiting your voice debuting here at Muse.

Nice to meet you and Jack, C.K. I can't wait to read Ghost Dog.

Thanks for the post...You don't have to worry, though, I don't have a cover yet... still waiting. But this is a picture I took and created this for my web page to give the book a look.... So, you are not in Rip Van Winkle phase... ;) Thanks for the nice comments. I'm anxious and eager to get my baby to the public.

And thanks to you too, Pat. Appreciate you stopping by and commenting.

Hi Charlie: Love the cover. Love the dog. Will most likely love the book!