Who? One of Museit Up’s Mainstream Science Fiction and Fantasy authors... here to introduce myself.
My name is Rosalie Skinner.

Good day from Down under.If you have been watching the news this week you will be aware of the major flooding we as a country are experiencing. Floods are a fact of life, but the extent and the ferocity of the water that hit Toowoomba is exceptional. Where we have notice of a flood peaking, there is time to move valuables, stock and furniture to somewhere safe. Last week’s torrential rain and resulting crisis was completely shocking. Thank goodness it arrived during the daylight hours. Many more lives would have been lost if it had come in the night.
Anyhow, that’s not what I am here to talk about. Just thought I would share what is making every Australian take measure of their lives and what is important to them. We can replace property but lives are precious. Locally we had three floods last year. These recent devastating floods haven’t impacted on my town this time. Neighbouring towns were isolated but prepared.
Still and all, again that is irrelevant to this post. Perhaps I ramble because talking about me as an author doesn’t come easily. Almost anything else is more interesting. So bear with me.
Why do I write?... I began writing when the local library ran out of books in my favourite genres and authors didn’t write fast enough. While out riding with my friend, we decided to write our own story. Fantasy that involved horses of course. One chapter, one character each, alternating, one a week, to be melded over the weekend with the next chapter discussed for the next week. We had a great time. The characters still live on, though the story has changed many times.
Although the original stories have been shelved, and the partnership dissolved due to distance, life and commitment, writing became part of my life. It took ten years before I completed my first novel. It was then that I began to learn about the art of writing.  Perhaps that is even more satisfying than completing a series, the gathering of information and applying it to my stories. I have re written my novels more times than I can count. Every time I learn a new way of involving my readers, I want to go back and improve on what I wrote previously. I like to leave each story for a year or so, then read it for another edit, to introduce anything I have learned in those months and to see it again with new eyes.
When writing anything I am always looking for feedback. What might seem clear to me as the author could be confusing to someone reading my draft. Especially with science fiction and fantasy, introducing ideas that are out of this world can be difficult. Making sure science fiction is base on scientific fact is important. Research is fascinating and applying ideas to fantasy plots is fun. Anyhow... feedback from critique groups, other readers and authors gives me an insight into how well my work is going.
Reading has always been my obsession. Now I have begun writing later in life, I find reading takes second place. Mostly when I read I am in ‘edit’ mode, looking for how another author succeeds or fails in telling the story in the best way possible.
Nothing happens fast in my writing world. Revision, research, writing all take time but even with publication dates approaching I am finding it takes time to promote and prepare for what is ahead.  Every day  brings a new chapter in my writing life. Blogging is almost mandatory  but I don’t find it easy. Talking to readers is probably the most thrilling and satisfying part of being a writer. We write to share our stories with others. When readers contact me wanting the next novel, I know I feel as if I have succeeded as a writer.
There... that’s me as a writer. Thanks for joining us here today at Museitup. The experience of being part of the Muse family is an added bonus to being a published author. Thanks to Lea and the team for creating such a place in the world, where authors feel like they have come home.
What have I written? Anyone interested in
Science Fiction and Fantasy, 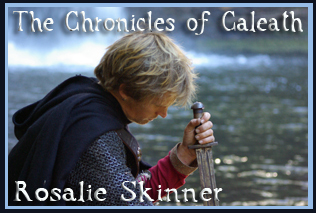 the first book in the series ‘The Chronicles of Caleath’,
will be released through Museitup in Sept 2011.
Described recently as Tolkien’s Lord of the Rings
meets George Orwell’s 1984, the story follows the
adventures of Caleath who is master of his own destiny until a powerful enemy with a grudge
decides otherwise.
The series is basically epic fantasy but anyone who likesspace travel, DNA enhancement, nanobots and virtual reality should find something in these books. Those who enjoy conspiracy theories, the Hollow Earth idea, pirates, vaccines, whales, tall ships, global climate change and volcanoes, we have you covered too. For epic  fantasy enthusiasts, there are plenty of sorcerers, male and female, good and bad, swords, dragons, other world creatures and magic. There are heroes who sometimes need rescuing and damsels who don’t. There are betrayals, friendships, duplicity and commitment.Thanks for dropping by. Thanks to Museit Up for hosting so many authors today. Take care now!
Posted by Rosalie Skinner at 3:46 PM

Sounds good. I like lots of SF mixed in with my fantasy, so this seems a good blend.

Rosalie, I hope things return to normal in Australia soon. Your story about Caleath sounds wonderful. Congrats on its upcoming release.

Rosalie, can't wait to read your book. I love everything I've ever heard about it. And I especially LOVE your cover model. mmmmm.

Hi Marva, Pat and Rebecca, Thanks for dropping by.The foods are still moving across vast tracks of our low country. Another little boy was lost today. What makes kids play on a pontoon in floodwater? Tragic.
Still, as a country we will rise from the mud and continue in the Australian tradition of 'she'll be right mate' and keep on doing what we do.
Rebecca, I have to agree. He does the trick for me.
Thanks for your comments. Roll on September. :)

hmm.. that's FLOODS.. not foods.. although food stuff and fodder are being shipped to places in need. Small towns not effected by floodwater have collected thousands of $$ worth of fodder for stock and are taking truckloads to where they are needed. Warms the heart.

Rosalie, what an interesting writing journey you've had. Love your book cover. I'll have to read it as I love fantasy and science fiction.

Thanks Penny, The banner was created during a workshop at the Muse conference. :)
I don't have cover artwork yet. Other than my own dabblings. Matt makes a cool fantasy hero though.

I enjoyed reading your post Rosalie.
The floods haved kept me rivetted to the TV. It's all so sad and spreads over an unbelievable amount of our country. We have floods in 5 states.
I hope Matt will feature on your 8 covers with Muse--go you! I cannot imagine Caleath as anyone else. Of course you will have to cast Matt in the lead role of the movies.

Please forgive me for deleting the comment ahed of this. I have been a busy bee today, trying to make certain I commenteded on everyone's posting. I've been at this since I first got up and it is now 3:01 in the morning on TUESDAY...eyes are staring to rumba...and my dyslexia is digging into its own dictionary with all too often alphabet soup results.

Rosalie, all of Australia is in our prayers. We know some of what you are feeling because of the devastation caused by Hurricane Katrina that the Gulf States are still trying to come back from. May all those you love and those your care about be safe and not suffer the staggering losses that come with such events.

That said...on to your introduction...Phew...I was scared I'd missed yet another cover during my Rip Van Winkle-ness.

I try very hard to stay on top of them...(as I snatch them the minute Lea and Delilah release the covers.) My notes tell me she is still creating July releases, so seeing September covers almost gave me the vapors.

Now that I can allow my heart to stop pounding in fear that I had somehow been out-of-it of late...although that COULD happen...I guess...let me talk about your post.

Rosalie, I love the analogy...Tolkein meets Orwell. Can't wait to learn more. And am looking forward to one day doing YOUR cover blog over on my Muse dedicated blog.

Thanks for your comments Wendy and Lin, I have tried to reply but somehow there is an error. Nevermind.. I keep trying.
Lin, these are just ideas and banners. Dont' panic.. there will be plenty of time before Sept. Although.. having said that.. time is flying.
:)
About the floods. Water is still flowing across the country in vast amounts. New towns are flooding each day. Thankfully they have plenty of warning, but still. The devastation is beyond imagination.