Have you ever met someone who is just naturally talented at giving relationship advice? Like in high school, everyone is having dramatic episodes, but this one person is calmly advising the drama queens on how to handle their relationships? That was me. I was the ‘go-to’ gal in high school for relationship advice. Funniest thing was, though, I never had a real boyfriend until college. I dated for a year, but it turned out we were just great friends. Six months later I met another awesome dude, we dated for six months and got married. We’ve been married 35 years on Valentine’s Day. I know ‘love at first sight’ is real. My middle daughter, a student at U of F, is engaged to her one true love. They’ve dated for 3 years and are inseparable.
When my kids were young, I tried really hard to listen and give good advice when they asked for help. While they chatted in the back of the car, I listened carefully to what they discussed, how they said it, so I could relate. And for years I had great relationships with all four of my youngins.
Then they became teenagers.
Those were rough years. For all of them and me. My husband was completely ‘out of it’ where understanding teens was concerned; so he left it all to me. That actually made things easier because there was no confusion about who set the rules or upheld them. They only had to argue with me and my word was law. What they didn’t know at the time was no decisions were made without my husband and me discussing it first. But they didn’t need to know that.
Having taught middle graders for fifteen years helped, too. I began to gain some insight about how their thoughts processed. They didn’t. Teens don’t think. They just react. Once I understood that, raising them became much easier.
When my oldest daughter was 18 she moved to Gainesville to attend Santa Fe Community College. She’d been chomping at the bit to get away from home all through high school, so I knew we couldn’t keep her home. She’d leave one way or another. I helped her find a tiny studio apartment she could barely afford, we gave her a car and were paying for the education. All she had to do was feed herself and pay for part of the rent and utilities. She had a part-time job. Then she met a guy.
Six months later she was back home in tears and deeply in debt.
When she left for Gainesville the weekend before she came back home for good, I told her she was welcome back home whenever she needed to come and that I didn’t trust the boy she was moving in with. Of course, ‘I was just being an overprotective mom’.
At 1 am the next morning she called from the Interstate, hysterical and headed home.
I never said ‘I told you so.’ I didn’t need to and there was no reason to wipe her face in her mess. She got the point when I hugged her upon arrival and had a safe bed for her to sleep in. Her sister had taken over their old bedroom, so she spent a year sleeping in her youngest brother’s extra bed. It wasn’t the most comfortable situation for her, but it was a bed, roof and loving home. When her sister finally left to live in Gainesville and go to U of F, she got the room to herself again.
She’s been home now for three years, getting her education straightened out at a different school; getting advice from me about her finances, and paying off all her debts, saving money to try again next year; setting goals for herself. And we are best friends.
We go see a movie every Tuesday night (she gets free passes from working there in high school) and share a popcorn. We go to lunch, sushi usually, at least one a week. We watch horror movies and comedies on the tv late at night, while I’m writing. She handles the after-school pick-up most afternoons (when she’s not working one of her two jobs or going to school) and always has a pleasant, helpful attitude. We sometimes question the wisdom of letting her go off on her own at 18, but she wouldn’t be the person she is now had she not had that experience. It could have ended tragically, I know. But it didn’t and I’m hoping she learned from the experience.
She graduates after this semester and plans to move to Orlando, get a job and continue in school. (Never thought I’d hear that come from her. She’s always hated school.) She wants to do video editing. And I think she’ll be ready to do this again and do it right. But if she’s not, she knows she can text, call or come home and I’ll be here to help.
Meanwhile, I’m in the throes of raising my 16-year-old son into manhood. I pray daily that he’ll make it-that I don’t kill him first. No, really, he’s a sweetheart and has always been a sensitive, very intelligent kid. He just got derailed around November and I had to reel him in hard. But I got him dual-enrolled at the community college (he’s a high school junior) and he’s doing better. I’m seeing my old sweetheart coming back.
The 11-year-old is verging. I see rebellion in his eyes occasionally and squirm. But I have this handled.
It’s what a Mama does. 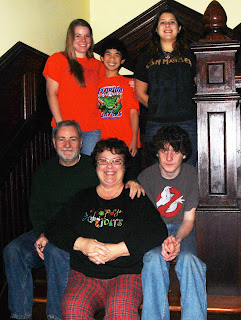 This impromptu picture was taken on Christmas 2010. It was the first all-family picture we'd taken since the Ghost Buster dude (my 16-year-old, in case you've never met one, lol) was born. I love this picture.
Rebecca Ryals Russell is the author of the YA series Seraphym Wars. Odessa is due out April 1, 2011 at MuseItUp Publishing. You can read more about it at http://bit.ly/igaNXF. She also writes a MG series Stardust Warriors. Zarena is due out July 1, 2011. Follow her progress at http://rryalsrussell.com.
Posted by Unknown at 12:01 AM

Congratulations on 35 years, Rebecca. That is wonderful. Good luck with raising a teenage boy. I'm not laughing at you, but with you. Why? I raised five. LOL. Ooy vey!

You have a beautiful family.:-)

You sound like a wonderful Mum, Rebecca. My son is just hitting those teenage years now, so I really appreciate your insights. :) Wonderful blog.