You’d probably be surprised what it took me to get here. I know it doesn’t look like much effort, just words on a screen, but I had to fight a lot of dragons to make the impression it took to get noticed and put into the book Odessa of the Seraphym Wars Series. I’m Conall—Conall Sean Wyman. 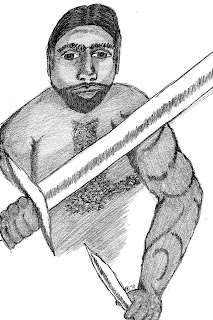 Don’t let my appearance, or this sword hanging by my side, throw you off—I’m actually a pretty decent guy. I only wear this loincloth because I need to move without constraint of clothing when I’m in the heat of battle. And I mean ‘heat’ literally. I found out when I first began this occupation, clothing is a fire hazard. Remember, I kill dragons. And I can see you’re looking at this scar down my left cheek, the way it cuts from my mouth to ear—dragon battle—one of my first. He’s dead now. Of course, so is my sister. That’s why the dragon’s dead. I don’t like to talk about it much.
You’re probably also wondering about my dark skin color. Most of the people you’ve probably seen here on Dracwald are lighter skinned, right? Well, my ancestry can be traced back to the aboriginals of this planet, who were dark-skinned and red haired, like me. Living outside has darkened me further, I’m afraid. But it helps me hide in the shadows and forest depths, so I’m not complaining. 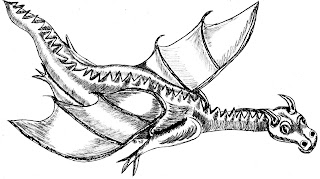 Dracwald used to be a fairly pleasant planet to live on. Of course, not in my lifetime. We’ve always been pressed under the thumb—or should I say claw--of Narciss, the demon ruler of Tartarus and lead dragon. He’s the huge black one with golden wings and tail-tip. You won’t see him flying around much. His wings have atrophied over the centuries. All he does is lie around his den and gaze at himself in the pool at its center. Naw, it’s the red dragon, the green one and the small brown ones you have to watch out for. That brown one is going to be mine one day. He and I have a score to settle.
Right now, however, my main job is to watch over Myrna and keep her safe. She has quite a task set before her and from what I’ve seen, watching from the recesses of the forests and swamp, she’s pretty green at this job. No pun intended. But without my help, she won’t last a moonturn.
She’s on the move again, so I have to sign off for now. Take care and Mind the Signs.
As of April 1, 2011 be ready for the YA Dark Fantasy world to quake as Odessa, Book 1 of The Seraphym Wars is released on Earth. Set on the demon home planet of Dracwald, 17 year old Myrna is transported from her home in Jackonville, Fl to a beastly, demon-corrupted, dragon-filled world at Laud the Creator's behest and against her will. In order to return home, she must fulfill a prophecy by collecting together the six remaining teenaged Vigorios (demon-hunters), get them safely to an island filled with Majikal beings who will train them all for the final war between the Seraphym and the Demons, and avoid falling in love with any of the three men pursuing her. Oh, and did I mention the constant attacks by various mythological beasts along the way, not to mention the demons who want her dead?
Author of MG/YA Dark Fantasy among other things, Rebecca Ryals Russell has two series coming out: The Seraphym Wars Series for YA and Stardust Warriors for MG.
http://seraphymwarsodessa.blogspot.com
Posted by Unknown at 12:15 AM

BONELLA: I eat dragon slayers for snacks. Is this all you humans have to offer?