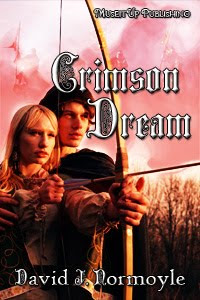 Torches flickered and mutterings filled the air. There weren't as many people as in the oak grove at Beras the year before, yet it was far from empty. Deren and Bennie approached Crego. Cal stayed at Deren's side walking slightly behind him as a guard, though he didn't try to take Bennie's bow again. The only torches were by the rock where the Council members sat, so most of the people were in semi-darkness. Scanning the crowd, however, Deren spotted Boad's stony face and Drin's scowling one. Deren hoped he could bring Drin back to his side—he liked the man—but that wasn't important now.
Jebbin sat in the Mogur's place. The boy wasn't shy about assuming the Mogur's responsibilities. Thrat and Vred sat on the other side of Crego. Gashar wasn't there.
Jebbin stood. "This is the boy who took Drin's knife and refuses to accept his crime."
"He denies taking it?" Crego asked.
"He cannot deny it for he carries it at his side. He refuses to accept punishment and demands to be heard by the Council."
Deren cleared his throat. "I—"
"Hold a minute, were you the boy who interrupted our Council last Beras?" Crego said, squinting. "You were indeed, I recognise you now. Daalten and Gashar were like hornets trapped in a mug after that meeting."
Crego smiled, and then frowned, the wrinkles in his face contorting. "It's not right for a boy to tell his elders what to do. With age comes wisdom, from youth, folly."
"Age lends authority to old men's folly," Deren said, instantly regretting it.
"Are you calling me an old fool?" Crego's face darkened.
"Listen to me. Mennon has invaded us. We have to prepare."
Crego turned to Jebbin. "What's he is talking about?"
"The same rubbish, he spouted last year," Jebbin said. "He wants to distract attention from his crime."
Crego clenched his fists. "Cal, take them out of here. Make sure he doesn't leave Stonecliff. He stole Drin's knife, and he won’t get away with it."
Deren thought deep down Crego believed him, however, some part of him couldn't accept it. Cal grabbed Deren and pulled him away. He would have to make them believe. Shaking off Cal, he reached into his pouch and pulled out one of the metal disks.
"This is something I retrieved from one of our invaders," he said, holding it aloft.
It was the large yellow one. It glinted in the torchlight. There was a collective intake of breath. Cal released Deren.
Crego recovered first. "That a pretty stone you found?"
Deren gave the disk to him. "You'll recognise the sunburst insignia."
Crego handed it around to the other council members. Jebbin threw it back to Deren who snatched at it and missed. Bennie caught it before it hit the ground.
"Means nothing. You found it somewhere," Crego said, sounding weary.
"Here's more nothing." Deren pulled some of the other coins from the pouch and threw them into the air behind him. They fell among the watching crowd. Tussles broke out as people scrambled to collect them.
Deren shot a disdainful glance at Crego and Jebbin, and then he stalked away with Bennie at his side. Outside of the torchlight, he had an idea. "Bennie, can you shoot those torches?"
"Should be able to."
"Shoot one of them and wait for my signal to shoot the other."
"Are you sure?"
"I'm not sure about anything anymore, I'm in the dark as much as everyone else. Just trying to do the best I can."
Bennie buried her face in her hands. "I just want to be a child again. Don't you want that, Deren, to feel like a child again?"
"I'm not sure I ever felt like one. Even if I did, two children died out at the farm that day, and we replaced them. We can't go back."
Bennie cracked half a smile. "I got one crazy fool for a brother." She punched his shoulder. "Let's dance."
She pulled her bow from her back and nocked an arrow. The gathering turned into a melee of shouting and arguing.
"Your attention once more," Deren shouted, pointing at the far torch. Bennie shot and it fell to the ground. It burned for a few moments and went out.
The talk stopped instantly. Dozens of heads turned to the guttering torch and then back to the darkness cloaking Deren.
"We have been invaded by Mennon. Four soldiers attacked us. Bennie shot and killed three of them. The fourth fled. Get ready for war, and get ready to kill."
Deren indicated the other torch and Bennie shot it. The fire quenched immediately, and all was darkness.
"Or get ready to die."
# # # #
Find David at his website, facebook or twitter.
Buy Crimson Dream at Muse, or Kindle or check the website for further info and points of sale.

Posted by David J Normoyle at 9:33 AM