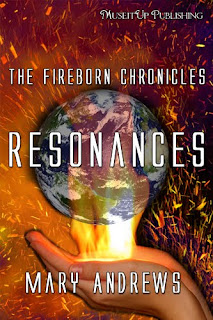 I had a hard time choosing a favorite scene because, it seems all of my favorites gave away too much of the story. Since the Fireborn characters' stories unfold simultaneously to the backdrop of a larger adventure.... Took me all day. The excerpt below introduces Rael Pointe and gives the flavor of what he does.
Commander, Overlord, Godhead Rael Pointe chose to ignore the gentle chime announcing the beginning of yet another workday. Instead, he relished the sounds in his still darkened room, and refused to open his eyes at all. They’re all workdays now, anyway. He listened for the familiar pulses around him. The little ones, like light switches, thermostats, and intercoms, barely clicked or crackled, or even trilled beneath the normal sounds aboard the great mothership. But the big ones,like computer terminals and links to main systems, pulsed, sometimes even purred. The rhythms might vary, but together they throbbed, a living entity whose tendrils reached everywhere.
A gentle presence touched his mind apologetically before Gabriel’s golden tenor voice began.
“Overlord?”
“I thought we agreed not to begin business in the morning until I summoned you.” Rael grimaced knowing the toll his displeasure would have on his assistant. Gabriel lived to serve him, but the business of running a universal corporation had become routine, and Rael was starting to feel more managed than manager.
“You have received a call from the Universal Government’s Dark Ops Commander. She insisted—
”Rael’s eyes popped open. A technopathic flicker of thought activated the lights while he hurried from his comfortable bed and began scrambling for fresh clothing. “I’ll be right there.”
“Yes, Overlord.”
Rael paused at the dismal tone of his servant’s thoughts. “Uhh, Gabriel, since it’s gonna take me a couple of minutes to clean up, go ahead and feed me today’s stats from the dailies…and maybe some coffee--your choice of blend.”
“Of course, Overlord.”
Rael shook his head at Gabriel’s enthusiasm as an overlapping flood of statistics scrolled across his mind into a precise overview of business accomplishments, trends, and requirements throughout the corporate universe he now controlled.
The status quo seemed to be doing nicely until he noticed a sharp decline in production at one of the new mining planets. “Argos,” Rael murmured as he splashed some water across his face.He tuned into the Seraphim’s computer pulse and linked to it. At the speed of thought, the Universal Hive Network opened, allowing him to delve into the tiny world’s resources, and he located the problem. Rael allowed the link to drop and finished running a comb haphazardly through his unruly platinum hair.
“Gabriel.” He spoke aloud, knowing the wondrously strange young man would always hear his master’s voice whenever his name was spoken—no matter where they were.
“Yes, Overlord.”
“Find out more about our mines at Argos.” He tossed the comb onto the dresser and headed for the door. “I’ll take the Government call in my private office.”
“Yes, Overlord.”
Rael stepped into his office and headed for the heavy desk in the room’s center. Given to hours of physical inactivity, whenever he did business or compu-linked, all of Rael’s quarters were furnished with the most comfortable furniture possible. He dropped into a recliner near the desk and activated the view screen. An angry redheaded woman sat drumming her fingers on her desk.
Rael smiled. “Lythia. I’ve gone to great lengths to set all my clocks to Government standard time, but this is awfully early. What’s so important you had to terrorize my poor aide into waking me?”
“One of our operatives is missing.” She leaned into the screen. “I believe you know her—Alandra Haze.”
* * * *
Psionic Sci FI: the inevitable fusion of MAN, MACHINE & THE PARANORMAL
Mary Andrews WEBSITE CONTAINS FREE SAMPLE CHAPTER FOR BOOK i & ii
http://mary-andrews.webs.com/

MUSEITUP BOOKSTORE PAGE:
http://tinyurl.com/Fireborn-Chronicles-RESONANCES
Posted by Mary Andrews at 4:02 AM

Why, thank you Steve. May I ask why only I was invited from this page?