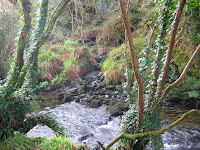 Get up, our Anna dear, from the weary spinning-wheel;
For your father's on the hill, and your mother is asleep;
Come up above the crags, and we'll dance a highland-reel
Around the fairy thorn on the steep.

Bad advice, this first verse of The Fairy Thorn by Samuel Ferguson. Everyone knows if you dance around a fairy thorn, the fairies will steal you away. Especially in County Galway, home of Finvarra, the King of the Connaught Fairies.

Finvarra is usually a decent dude. He likes human women, however, and often kidnaps them as dancing partners, as Janet, an American teenager in Ireland, learns to her dismay. Janet and Finvarra costar in my young adult adventure, Glancing Through the Glimmer, due for release from Muse It Up in autumn 2011.

Finvarra also stars in a wonderful old Irish tale called Enya the Bride, which I've retold for St. Patrick's Day. So come in from the cold, Put the Kettle On, and enjoy!

Read Enya the Bride on Pat's Blog, Put the Kettle On
Posted by Pat McDermott at 9:55 AM

Pat this sounds lovely! Never been to Ireland, but the thought of it conjures up fantastical and mysterious magick in my mind.

Sara, if you ever do get to Ireland, you will have no doubt that "magick" exists. Thank you for stopping by!