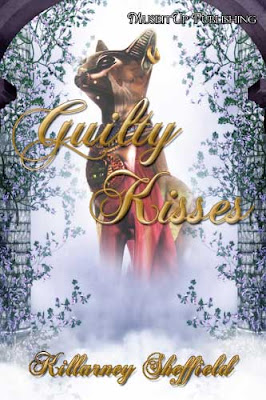 Historical romance author Killarney Sheffield has obtained the rights to singer/song writer Lawrence Gowan's Love Makes You Believe song off his 1990 Lost Brotherhood album. The song is to be used in a stationary youtube trailer for her 2011 debut release entitled Guilty Kisses, published by Canadian ebook and paperback company MuseItUp Publishing Inc based in Montreal, Quebec.
Killarney is quoted as saying, “I obtained my first historical romance contract with MuseItUp in July 2010, which was quickly followed by contracts for three more novels and two short stories. Of course I was pretty thrilled. As a new author I realized I had a lot to learn so I took in the Muse Online Writers Conference run every year by the CEO of MuseItUp Lea Schizas. At the workshop I discovered youtube book trailers are an important step to advertising yourself as an author. I took Delilah Stephans class on building trailers and set to work to find just the right music for Guilty Kisses.
"There are many sites on the internet where you can download and use free tracks from local musicians, however, I was having trouble finding just the right piece to fit, then I heard Gowan's Moonlight Desires on the radio. It was exactly the tone I was looking for. Gowan has an amazing way of telling a profound story with his music. I decided I wanted the piece. I scoured the internet looking for the current rights holder but just kept coming up with blanks so I found Gowan's official website based close by in Calgary. I left a message for him on his site never dreaming he would actually get back to me. To my joy and surprise I received an email back from him giving me the info I needed.
"I contacted Anthem Entertainment Group and was told to send them my trailer and they would have a look at it, but that the final decision would rest with Gowan himself. They returned with the answer that no, they didn't want to release Moonlight Desires for my use but asked if I would be interested in one of Gowan's other pieces off his Lost Brotherhood album. Fantastic news, Love Makes You Believe is a beautiful piece that I had never heard before and it fit very nicely in my trailer.
"Gowan and the people at Anthem Entertainment have been wonderful to work with. It just goes to show, you never know unless you ask.”
For more info on author Killarney Sheffield, MuseItUp Publishing Inc, or the Young Writers Literacy program go to  http://killarneysheffield.bravehost.com, http://killarneysheffield.blogspot.com  or  http://www.museituppublishing.com
Posted by MuseItUp Publishing at 6:19 PM

You set a good example. Congratulations.

Thank Robin, it was a learning curve and lots of fun. The trailer is entered in the booksinsync.com trailer contest as well as musepen and soon the covey awards trailer contest. I really love the song and am hoping to win an award as a thanks to the amazingly talented Lawrence Gowan. Wish me luck!