My Favourite Scene in The Heart's Lone Desire 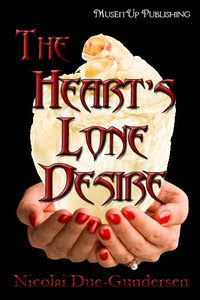 The Heart's Lone Desire is a dark tale of a promised power, the quest to find the ivory heart of immortality. In this short extract, the protagonist Aaron Carlson experiences his first uncomfortable brush with the heart's powers. This scene, while brief, emphasises the difficulties and the horrors that Aaron is about to encounter. His world of professional thievery, always carefully planned, is about to fall apart.

Aaron kneeled close to the papers, his hand finding the nearest sheet. He turned it over.

The other side held the promised treasure, its yellowed surface home to thick defined lines. Black ink proffered an organic shape to his eyes, a simple depiction of tissue and muscle.

It looked like an ordinary heart. So generic in its shape, so common. Human or animal, it could have belonged to either. Only the white of its shade, strangely visible in this darkness, said otherwise. That, and the four jagged cracks running through it.

His free hand reached for their darkness. The black of their solid lines. They seemed to stir at the touch of his fingers. He could feel their depths against the chill of ivory. Smooth bone stroked his trembling digits, invited him to explore. The dirt of Trenton’s abode disappeared, and now his arm was plunging into a new world, the drawing swallowing up his flesh, taking him elbow-deep into its wonders. He was clutching the heart with clammy fingers, and its white chill, he knew, was opening just for him. The cracks were growing, turning themselves into tears, and underneath the bone the redness of tissue teased his eyes.

He could not let go.

He felt the cracks fully part for inspection.

There was a spurt of warmth upon his hands. Sound beyond life beginning to beat its tattoo.

He felt thickness crawling past his fingers.

Behind him, Trenton’s voice.

He felt himself flush, his skin reddening throughout. Something pricked at his chest.

“No!” The unwanted sensation helped him find his voice. He dropped the heart. The thick warmth rushed out of him. Benign darkness returned to his eyes. He was back in the Derelict Quarter, and the sketch was a folded mess, crumpled by the weight of his fingers.

His hand went to his chest as he struggled to calm his breath. Trenton’s voice appeared behind him.

“Because already it’s trying to find you.”

Further darkness awaits Aaron Carlson, as his quest plunges him into blackness. Discover the heart's ancient secret May 2011.

Posted by Nicolai Due-Gundersen at 2:31 PM