What it means to live in a half Irish household

What it means to live in a half Irish household.
By Killarney Sheffield
Author of Guilty Kisses 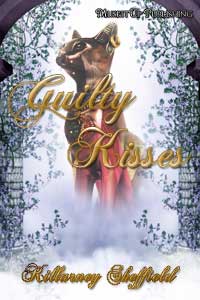 If you can't tell by my first name, yes, I am Irish. Killarney (pronounced Kee-lar-knee) is Irish. And, yes, it is my real name. My grandmother on my father's side is this little 4 foot nothing red headed Irish gal with that oh so fiery temper that the Leprechauns are so famous for. (Though if you ask me I am the sweet and mild mannered exception to that old Irish myth. My English hubby is the one with the temper.) Now in our house we don't do the green beer until you swill tradition but we have a little, very old tradition that we adhere to every year. The 'Catch me if you can' tradition. What is that you ask? Its simple really. The night before St. Paddys day the kids plot and plan a way to catch that crafty little bugger Paddy O'Neil or more commonly known as the Leprechaun. There is great thought put into this as the legend says “he who catches Paddy can make him tell where he has hidden his fabled pot of gold.” Yup, a whole pot of gold. Are we talking a gravy pot or a witches caldron here? I have no idea but well, does it really matter? Gold is Gold. So every year the kids plan, plot and build their clever little trap. Now you can't just expect a prankster like Paddy to walk into any old trap, you have to bait it just right. With the right bait you are sure to catch him. Well, almost sure...maybe...ok truth be told, you have a 1 in a million chance but I don't like to dampen the kids enthusiasm. Anyway it has been passed down through generations the right bait needs to be shiny and what else, GREEN. I'll give you an example. The year before last we tied a sack of shiny gold coins with a shimmering green ribbon. The bait did work. In the morning we found the bait gone but unfortunately our trap was empty. However Paddy never leaves you completely empty handed. He left behind his traditional 'ha ha ya missed me gift'- a bag of chocolate coins and duct taped my favorite china horse to the ceiling. Yes, Paddy loves to prank those who try to catch him. Last year the kids tried green peppermints and shiny green foil. The kids were so excited to get up and find the trap sprung and GLOWING! They got the fishing net, surrounded the cardboard box trap they had made and prepared to grab ol' Paddy as soon as it was lifted. Unfortunately that crafty old green devil left a glowing static lamp in place of the bate and of course chocolate coins. So you see the key to out smarting a Leprechaun is...oh, you expected me to give you the answer to that one? Well that wouldn't be any fun now would it?
This year my kids are once again plotting how to catch Paddy O' Neil. The bedroom door is closed and there is a lot of whispering going on. Will they catch him? Probably not, but that is the fun of it. Really, how many kids do you know who would take a lump of shiny metal over yummy chocolate coins?
Happy St. Patrick's Day Everyone!
Posted by MuseItUp Publishing at 9:25 AM

What a fantastic tradition. I loved it. I did soemthing similar on St. Paddy's day for my students each year. Made green chalk dust footprints around the room with treasures throughout. My students had to follow the footprints and find bags of goldfish crackers and gold candy coins....followed by lime cupcakes, lime koolaid, and green wintergreen mints. We had my hand made version of "Pin the Sheleleigh on the Leprechaun" too, and tic tac shamrocks.