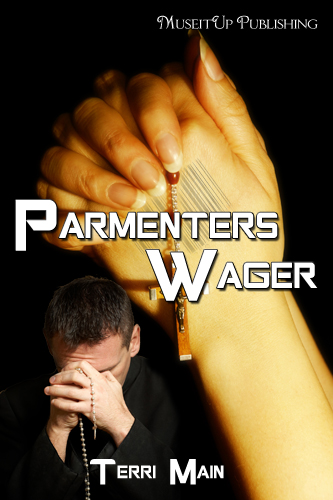 Parmenters Wager by Terri Main
NOW AVAILABLE
Rev. Chris Parmenter enjoyed a comfortable life as pastor of a prosperous suburban church. Then one day, a parishioner reveals that she is a clone and asks a provocative question, “Do I have a soul?” His search for an answer leads him to a surprising conclusion as he balances faith, compassion and the business of running a church.
Excerpt:
“Erica…”
“Pastor…”  They both spoke at once, looking away from the river and at each other.
“No, let me go first, Erica. I want—I need to apologize to you. You came to me for comfort, compassion, and understanding, and I didn’t give you any of that. I’m sorry. I should have done better.” He wanted to say more, to explain, but he believed that apologies should be heart-felt expressions of regret over bad actions, and not explanations of them.
“I was hurt, but I’m not without fault either. I should not have hidden my background. My only excuse is that of fear. So many people reject me when they see that barcode. I just didn't want to be rejected again. I realize that is no excuse. I should have been stronger.” Erica looked once more at the river. Another silence followed as Pastor and parishioner watched a trickle of water cut its way through a sandy riverbed.
“Pastor, do you know what I do for a living? I design cyberweb environments for social networking services. It involves writing code and crunching numbers. I really hate writing code, and I don't like numbers that much, but I can do the work at home where no one will see my barcode. I did the job interview by vidphone and was careful to keep my hands in my lap. If I hadn't, I might not have gotten the job. What I really wanted to be when I grew up was a grade school teacher. I love children. I love being around them. I want to see them grow.”
Parmenter could see tears beginning to rise in the corners of Erica's eyes. “When I was in my senior year of high school, I went for vocational counseling like everyone else. The sign on the wall said, ‘Live your dreams.’ I told the counselor my dreams. She was kind, but suggested I train for something in computers. Only later did I discover that the state Code of Education forbids clones from serving in any state job involving children.” Erica fished a handkerchief out of her purse. She patted her eyes.
“I didn't know.” It was all Parmenter could think of to say. Maybe that was some of the “fascinating” information the computer had left to tell him.
“Few people do. I’m not covered by any of the civil rights legislation of the past hundred and fifty years. I can be denied access to any business. I can be denied a job simply because I am a clone. If I was beaten to death tomorrow, the perpetrators would be charged with a property crime and not homicide. It’s a felony with an equal amount of jail time, but it is not called homicide. To call it homicide would be to admit clones are human beings which is something the world is still not ready to do.”
At this point the pastor saw something in the young woman he had not seen before—anger. More accurately, it was a type of righteous indignation over a sense of injustice. Although, to be fair, it was an “injustice” which only affected a very few, and, honestly, could they actually be considered human?
Far from helping him clarify matters, he found himself more confused than ever.
Posted by MuseItUp Publishing at 10:39 PM