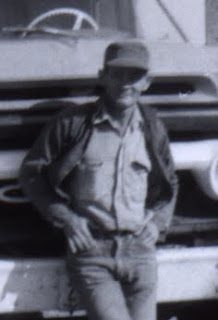 "Hand me that hammer," my father said, his hand waving in the air, fingers pointing to the white hospital wall.

"What hammer is that, Dad?" I asked, reaching to rest my hand on his arm.

"It’s right there." With a sigh, he lay his head back against the pillow. "Isn't the lake beautiful today? Look at those ducks on the water and all the flowers..."

As if the light had switched on, the morphine glaze left my father’s eyes and he looked at me, a sheepish grin crossing his face, knowing he’d been sharing things unseen to me. I gazed back into his lined face, envious I couldn’t see the mansion he was building or the beautiful scenery surrounding it.

We shared a few more stories about the kids, laughing at the sibling rivalry of my two boys, each wanting to ride in their daddy’s new pickup first. Typical brothers at ages 7 and 4. My daughter, just starting to walk, was too young to share in their combative antics.

My dad smiled. “I’m sorry I won’t be able to get that ride in Mike’s new truck.”

I cringed. I knew what he was saying, but I didn’t want to hear it. The Doctors hadn’t had much good news lately. “I don’t want to hear you talk about that, Dad. We’ll take you for that ride, just as soon as you get out.”

Dad squeezed my hand, forcing me to look him in the eye. “You have to face it, honey.”

I looked away, blinking to keep the wetness from welling up. I didn’t want to think about it. I didn’t want to accept the end was coming. But my dad had already accepted it. Despite my denial, I admired him for his strength and acceptance. He had embraced God’s will and was preparing for his journey home.

My father looked so small in the hospital bed. He wasn’t a big man. No, but he was a little man with a BIG heart, always there for me, no matter what. He’d suffered many upsets in his life. He’d been plagued with numerous strokes and heart attacks, to the point there was little heart muscle left. But he kept living each day with a positive spirit. And he wasn't about to let anything keep him from his family or his garden. Despite losing half a lung the year before, he continued to care for his acre of tomatoes and cucumbers, making sure to supply each of us kids with the goodness of his bounty.

At Christmas, things had taken a turn for the worse. After months of back pain and intense physical therapy the doctors had given up and admitted him to the hospital on Christmas Eve. One week later he was diagnosed with spinal cancer. It seemed each time the doctor came in, the prognosis got worse. Two years to live…one year…nine months…six months…three months…

But my father's spirit never wavered. He still talked about his big garden and what he planned to grow that summer. When he lost the ability to walk, he devised a plan how to cultivate his garden from his wheelchair.

As my father's health deteriorated, the nurses were forced to give him more and more morphine for his pain. He’d been a carpenter in trade and while under the influence of the drug, he would hammer and nail on the house he was building in heaven. A house big enough for ALL of us, he said. He would talk to people that weren't there, then turn and talk to us as well.

He was remarkably calm about his condition. Even through the pain and radiation, my father never showed any fear. I didn't want to talk about it, but he would hold my hand and look into my eyes so calmly and simply describe the house in heaven.

Sunday came as another day. We roused the kids and trekked off to church. After Mass, we visited the hospital, taking the children to see Grandpa, though I secretly worried they might be too much for him.

As I opened the door to his room, my heart skipped a beat. “Well, look at you!” I gasped. My father sat in the big leather lounge chair next to his bed. It had been over a week since he’d felt good enough to sit up.

My Dad beamed, the glimmer in his eyes bright enough to light the room. He opened his arms and embraced me, then turned to give big bear hugs to the boys. My daughter squirmed in my husband’s arms and Dad reached out for her. “Give her to me,” he said softly. A tear of joy slipped out the corner of one eye as he cradled my little girl, cooing to her, his eyes misting with happiness. My daughter sat still on his lap, enthralled with his attention.

We laughed and joked, visiting for over an hour. My aching heart lifted with hopes the doctors were about to be proven wrong. It wouldn’t be the first time Dad cheated death. He was getting better.

We finally took our leave and drove the mile home. Everything seemed brighter, happier. My heart felt lighter. But as soon as I opened the door, the phone rang.
“Hello?”

“Charlotte? It’s Dad.” It was my mother. Her voice wavered slightly. “He had a stroke right after you left. He’s unresponsive.”

The world spun about me like a tornado spiraling into the depths of the dark earth. I immediately returned to the hospital but Dad never woke. On Tuesday, January 15, two days after his last stroke, 22 days after entering the hospital, my father, Orin Peterson, passed away, never regaining consciousness.

At first I was angry. Why would God allow my father to get better to only rip him from my life. But as I reflect on that Sunday, I realize I’d been given a tremendous gift, a most treasured memory. The angels had worked their magic. My father celebrated that last day, cherishing every moment with each of us, then closed his eyes and let God’s will be done. I believe he’s still building on our home in heaven and I’m sure it is the most beautiful mansion ever. Though I still miss him every day, I can only smile and thank God for the gift of his last Sunday with us. It’s a memory I will never forget....I love you, Dad! Happy Father’s Day
C.K. Volnek
Posted by Charlie at 9:39 AM

Charlie--What a beautiful tribute to your dad. Was he Norwegian? Mama's maiden name was Peterson. I don't know as much about the Peterson side of the family as I do about the Johnsrud side.
Hugs,
Rochelle
www.rochelleweber.com

Charlie, thank you for sharing your memory about your visit with your dad. Beautiful tribute.

Thanks for stopping by and leaving me a message. Rochelle, our name Peterson comes from the swedish line. Or it could have been any other of the numberous nationalites in me. I am definitely a Heinz 57...a perfect example of the melting pot of the US.
Thanks again.
C.K. Volnek