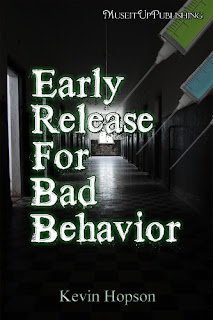 Early Release For Bad Behavior
by Kevin Hopson
Sci-Fi Dark Fiction
Releasing May 27, 2011
Blurb:
Someone is illegally moving death row inmates between prisons, and one prisoner finds out firsthand what the perpetrator wants with them.
Excerpt:
“Evans!  Ready for leave!” A guard barked at me unexpectedly.
I dropped the towel in the sink and turned to face him. “What’s the reason?” My voice lacked firmness due to the uneasiness I felt.
“Just do it.” Though not much of a physical specimen based on his balding, bronze hair and flabby build, the guard’s stern-eyed stare forced me to take him seriously.
I took the mandatory orange top from the drawer beneath my bed and slipped it over my head.
“Arms out,” he said.
Every incarcerated man dreams of being on the outside one day, yet I was perfectly content on staying in my cell. When you can literally walk your entire world in two or three strides, it wears on you, and I had only been at El Dorado for a little over a month. In this case, however, I feared meeting the same fate as those death row inmates who were dragged from their cells before me.
I stepped forward and put my hands through the opening in the cell door. As the guard slapped his handcuffs on me, droplets of sweat started to roll down my face, making their way from the base of my shaved head past my hazel eyes. Despite the fact I was several inches taller than him and in impeccable shape for a guy of forty-something, I experienced a sense of helplessness. I was at the mercy of others now.
Posted by MuseItUp Publishing at 10:02 AM

I don't know if the stormy weather outside has anything to do with it, but I started getting cold chills when I read this post. I see that the release date for this one is only a couple of days from today.