My Friend, My Mentor, My Inspiration...My Father 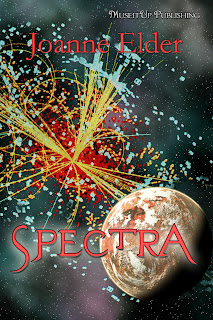 My father, William Cavendish Macneill, started his journey in 1921 and finished in 2008. During those eighty-seven years, he saw the great depression, piloted fighter aircraft during World War II, earned a degree in engineering, ran a successful business, and raised two daughters. It’s frightening to think we can sum up a person’s life in a mere sentence. The beauty of the great circle of life lies in the fact that part of each one of us carries on in the lives of our children. And it’s not just our genetics. Even more importantly, it’s our teachings, our morals, and our inspirations. With that in mind I’d like to say few words about how my father influenced my life, leading me to be an author of Science Fiction Thrillers, in particular, Spectra, due to be released in July with MuseItUp Publishing.

William was a brilliant mathematician and a man of science. I was fortunate enough to be born with my father’s mathematical mind. My love of science came later, not to mention my love for science fiction, which started watching countless episodes of Star Trek with my father. Naturally, I followed in his footsteps, earning both a Bachelor’s and Master’s degree in engineering. And so was the first part of the equation to becoming a science fiction writer.

The second part of the equation, the creative spark, came in part from my father’s stories of Lucy Maud Montgomery, author of Anne of Green Gables. Lucy Maud was my grandfather’s cousin. My grandfather spent summers on the Macneill farm in Cavendish, Prince Edward Island visiting with Lucy Maud. As a child, my father met with her and he shared stories of those visits with me. I always thought it was a fascinating and inspirational part of my family’s history.

Intertwined in the plot, Spectra touches on the existence of the human soul. Part of my inspiration for this came to me after losing my father. I didn’t want to accept his journey was truly over. For me, any belief in the human soul has to have a scientific foundation. I began to research the human energy field and living inorganic plasma searching for the answer I so desperately sought. What I found was compelling, thought provoking and comforting. Perhaps, Dad, you’re somewhere out there watching me write this blog post.

Spectra is dedicated to William Cavendish Macneill and half the author’s e-book royalties are being donated to Alzheimer’s research in his memory.

Author of Spectra, book one of the Spectra Series, MuseItUp Publishing

What a wonderful tribute to your father. Yes, we influence the lives of our children in so many ways and probably have no idea what they are absorbing. I'm glad your dad was such a loving, wonderful influence in your life.

What a wonderful tribute. It's amazing how much our parents influenced us. I can only hope I've been as good an influence on my own children. Thank you for sharing.

Please for humanity's sake please do it once
I have made a blog at blogger.com Since i have added a google adsense in the blog but haven't made a penny with this. I need your help and support to help me make some money to PAY MY Tuition Fees.

What you have to do is follow these simple steps

Note: Only ONE click is needed. If I ever ask you again for the click please never ever click again.
I will be grateful to you.
I really need your help

So touching Joanne. I'm sure your father is still proud of you and watching your success.
An amazing tribute to your father, such beautiful memories.
Hugs.