On Becoming a Mother

When I became a mother for the first time, I couldn’t believe the overwhelming sense of awe that came over me as I held my daughter for the first time. Love filled my heart as I gazed at this tiny being that lay in my arms. A whole realm of emotions went through me in a matter of seconds. This child depended on me. Was I up to the task? Would I be a good mother? What did I know about raising a child?


Sure, I’d been around babies ever since I could remember – I started babysitting at age twelve, but even before that I had a fascination for babies. I used to visit new mothers on warm summer days and play with their babies. I even offered to take them for walks. I always loved kids.

But this was different. I wasn’t just babysitting. This child wasn’t going home with me. She was mine.

Back then babies were kept in the nursery, except for feedings. I’ll never forget that first feeding. The nurse brought my daughter in and put her in my arms – we had to lie flat in our beds. Not the easiest way to feed a bottle. Anyway, she gave me the bottle and I put it in her mouth. She didn’t immediately start sucking, so the nurse showed me how to jiggle the bottle to initiate the process.

It worked and she began sucking on the bottle, only to begin choking. Fortunately, the nurse was still there. I almost panicked. I took the bottle from her mouth and tried to put her in an upright position, again no easy feat while you’re lying down. The nurse took the bottle, put it in her mouth and literally gagged my daughter, who immediately began spitting up.

Let me tell you, I was ready to blast her a good one. Who did she think she was choking my child? She repeated the action and my daughter spit up a lot of mucus. She quietly explained we needed to get that mucus out. Yeah, like I was going to choke my daughter on purpose.

Somehow, we got through that feeding and the subsequent ones went fine, although she remained a spitter until she was about three months old.

My daughter is 47 now and a beautiful young woman with three children and a grandchild of her own, so I guess I managed to raise her well. I call her my experimental child. While she was the first to get to do everything – a fact her sisters never let me forget – she was also the first one we made our mistakes with. It helped having an older sister with two children and of course my mother, who, God bless her, was helpful, even if some of her ideas were old-fashioned or old wives tales. We worked through all the childhood diseases, stitches, and heartbreak and we had a lot of good times too.
But it didn't end there. My second daughter was as different from the first as night and day right down to their coloring. While the first was fair, bald (eventually blond), the second was olive skinned, with a dark brown curl on top of her head. When they first brought her to me, I asked if they were sure she was my baby. I expected a replica of the first, so I was quite shocked.
They were also different in temperment as the grew older. And the third daughter came along, and I expected her to look like one of the older two. Not so, this little girl had carrot orange hair. Talk about shocked.
She had a temper to match the firey head of hair. My father in law called her a bull in a china shop when she learned to walk. She plowed through the house like she was on a mission, Usually she was, to disrupt her sisters.
People who think sons are the same as daughters couldn't be more wrong. When I held my fist son in my arms, having a son took on a whole new meaning.   Somehow I knew I was having a boy - don't ask me how. Mother's intuition? We  didn't have ultra sounds back then, but I told the nurse, who made up the beads ahead of time, this one was a boy. She had used pink beads. She told me if I had a boy, she'd change them. When I woke up - yes, I was asleep during these births - true to her word, when they brought my son to me, he had blue beads.
A more patient baby, I've never seen. From the day I brought him home, he stopped crying the minute I turned him over to change him. Oh yeah, babies slept on their tummies back then. My second son insisted on giving me false labor pains every evening right around dinner time and lasting into the night for two weeks before he was born. I think he just didn't want me to eat.
I woke up one morning, went to the bathroom and wow, cramps started up immediately. Since  my husband wasn't home from work yet, so I called my sister who lived a couple streets away. Unfortunately, her husband had already left for work . So I called the one and only neighbor I knew - we had only moved in a couple months previously - and told her to get me a ride to the hospital.
Fortunately she called another neighbor and came to sit with my kids. While we waited for the other neighbor to get their I paced. My neighbor got nervous and told me to sit down. I told her I couldn't,which made her more nervous. Baby #5 was born an hour after I got to the hospital, weighing in at 5#5oz. my smallest child. His temper didn't match his size. When he wanted something, he let everyone know it.
And finally my youngest son, my baby arrived quite unexpectedly. He wasn't due for another month. Weighing in at 7#6oz and 21 inches long, he was far from premature. Definitely a miscalculation.
While my three daughters looked so different, my three sons all blond, looked like their father. Of course they all had different personalities.
With each child, I experienced the same overwhelming awe, happiness and other emotions, but the fear lessened. With each one, I knew I was capable of raising them. I was blessed with three beautiful daughters and three handsome sons, all of whom I love more than life itself. They’ve in turn bestowed fourteen beautiful grandchildren on me. It’s great being a mother. Life is good. 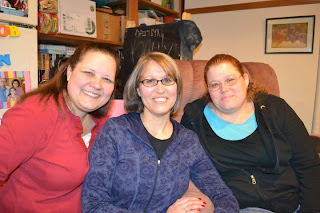 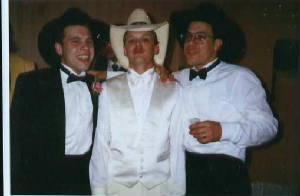 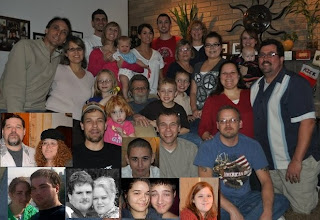 All of us, the inserts couldn't be with us that day. It's great to be surrounded by family.
Happy Mother's Day Everyone!
Posted by Roseanne Dowell at 12:57 PM

My goodness, what a huge family. I guess you'll never fear being alone. I would have never guessed you are a great grandmother. Very nice blog. I wish you and yours all the best.

Roseanne,
You have a wonderful looking family. Congratulations and Happy Mother's Day. I've been with my children and most of my grandchildren today and it's been GREAT.

Roseanne this is a beautiful post for Mother's Day. What a great family! Thank you for sharing your thoughts and your beautiful family with us:)

Love seeing the whole gang! I remember the first born. I wanted to send her home with someone who knew how to take care of babies. I sure didn't!! Blessings..

Wonderful story. Thank you so much for sharing. Love the photos.

Thank you all, for commenting. It was a wonderful day.

Beautiful pictures.I also remember giving birth, despite the many years between. Thank you for sharing. Hope you had a great Mother's Day.