Romancing the Beast: Beyond Vampires and Werewolves. Part 2 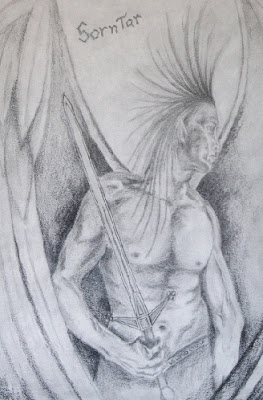 The phoenix appears in Greek, Roman, Egyptian and Chinese mythologies. The mythical firebird was said to live 500 to 1000 years and at the end of its life it built a nest to act as it own pyre. There it burned, fast and ferocious until only ashes remained. Then out of the ashes of the old, a young phoenix arose. The legends of the Phoenix are old and varied, but most depict it with colourful plumage which reminds me of a parrot.

So when I was developing my version of a phoenix many years ago, I decided to studied parrots and draw on nature to give my character, Sorntar, some realism. Parrots are social birds, many living in flocks, but they form close pair-bonds over time. Courtship can last a year or better with the pair bond slowly growing deeper. In a nutshell parrots are somewhat picky about their mates and slower to form bonds compared to many animals, but are intensely loyal once they do. But I didn't want a reader to equate Sorntar to a parrot; he needed to be grander. And to me, grander meant bigger. Way, way bigger. Think big like a Roc (another mythological bird of prey that was huge). The next thing I had to think about was where such an immense bird would live. It would need a combination of magic and thermals to fly, but even then it would have limitations to what it could do. Even getting off the ground would be a challenge for such a large bird. A mountainside city was the natural solution to the problem.

Since a romantic subplot required Sorntar to be human, the gods (me) granted him the ability to shape shift using his elemental fire to burn one body away and form another. That in turn led to another glaring plausibility problem. No bird-like creature would ever sacrifice its wings. That would be like us willingly cutting off both arms.

Actually it was an easy fix. Since Sorntar needed to be both bird and man, he became both. I love fantasy. The phoenixes in my romantic epic fantasy have a humanoid body with the crest, wings and tail of a bird. 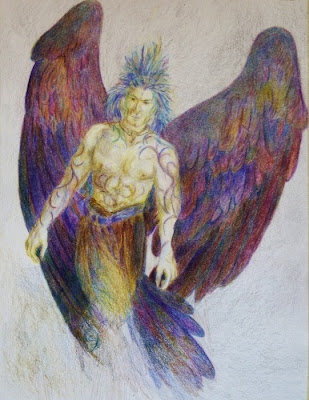 Sorntar now had some birdlike characteristics but was human-like as well. I did a quick drawing when I was bored one day. (Don't laugh too hard).

My sister is a landscape artist, but I talked her into doing a quick colour pencil sketch.

Posted by Lisa Blackwood at 8:15 AM

Lisa, is that your drawing to the left? It's good, girl! what's to laugh? I wish I could draw like that. Fascinating stuff, this!

Thanks. And yes, the black and white picture is my attempt at drawing. I haven't picked up a pencil since high school...mumble...mumble years ago.

My sister did the coloured pic.

That is a great drawing. You should pick up your pencil more often.

Your sis is also quite talented.

Thanks! But if I started drawing, I wouldn't have time to write. LOL.