Romancing the Beast: Beyond Vampires and Werewolves. Part 3 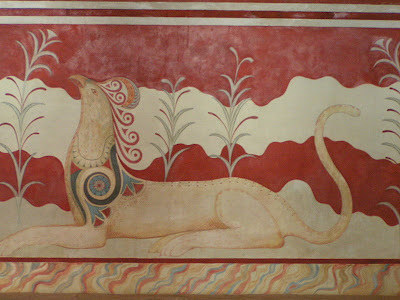 This mythological beast has several spelling variations...gryphon, griffon and griffin. I liked the look of the word 'gryphon', so predominately use that spelling in my work. With the head of an eagle and the body of a lion, this is an easily recognizable mythological critter, even today. Throughout history it has been used in heraldry and decorative sculpture. In modern times, we see it used as a mascot for many universities and emblems for various businesses. But interestingly, there aren't a huge number of stories with them as main characters.

The gryphon myth first appeared in ancient times around various parts of the Middle Eastern and Mediterranean area. From there it spread outwards to Greece and as far as western Asia. The gryphon's appearance changes from culture to culture. In Asian culture, the gryphon has a crested head. In contrast, the Greek gryphon was usually portrayed with a curly lion-like mane. Most were shown with the forelegs ending with bird-like claws, and lion's hindquarters. Although some older illustrations showed gryphons with a lion's forelimbs. It's generally shown with large ears which are sometimes feathered. As with any myth, it varies from place to place, and sometimes the gryphon is depicted with wings, and sometimes without.

The one thing common in all mythologies is that the gryphon was a deadly hunter, terror on the wing. It was huge and vastly strong, able to carry off a man or even prey as large as a horse. Then it would fly its victim back to its nest to feed its young. Imagine for a moment how large a bird of prey must be to fly a rabbit back to its nest. Next visualize a horse. Now imagine the sheer size of the beast capable of scooping up a horse in its talons. Woe to any person foolish enough to wander into the gryphon's territory.

I've always been intrigued by the contrast between the gryphon's nobility and it's hunter's nature. For my present work in progress, I needed a conflicted main character and the gryphon fit perfectly, but it needed to be fleshed out. Once again I looked to nature. Eagles are another creature that forms a deep pair bond, and during nesting time, they are territorial. Lions are also territorial, so the gryphon would be extremely territorial if it inherited that characteristic from both species. Another trait my gryphons inherited from lions is the instinct to hunt as a pride, or Clan as I decided to name them. A clan of gryphons could have devastated an army, inspiriting fear in the hearts of the bravest of warriors. But everything has a weakness and my gryphons needed a weakness too.

Grief is their weakness. My gryphons are so depended on their family Clans if something should happen to the Clan, the survivor would be destroyed by his grief, turning him into a savage berserker. He'd continue to kill anything in his path until exhausted, and then death would claim him.

So take a moment, study a bit of mythology and have some fun changing a creature into a good fit for your next story.

***The above gryphon picture is from the throne room of the palace of Knossos, dating back to the time of the Minoan civilization on the island of Crete. Thank you Wikipedia.***