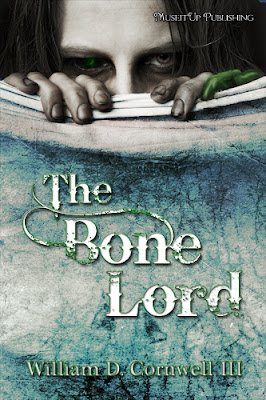 Blurb:
Necropolis, City of the Dead. The Bone Lord rules over every wandering soul with an unspeakable power. A zombie by the name of Curvis is called upon by the Bone Lord to perform a special task. A task that will lead him in unexpected directions…

Excerpt:
Curvis could see the throne now. It was carved from alabaster, its shocking white contrasting with every slab of obsidian in the city. Some say the alabaster came with the appointment to demigod. Others said his first command to the undead was to make the throne for him. Whatever its origin, the throne was impressive. It was the crowning piece of the Pit. A thousand figures carved into its surface.  Each figure as white as the bones it was built upon. Faces leered at you from every surface, howling and screaming from the frozen stone. Thousands upon thousands of bones filled the Pit beneath it, with steam whistling and hissing between every open ribcage and cracked pelvis. The steam was blue as it curled and rose; each vapor a slightly different shade than the one before it.
These are the bones of those who pleased the Bone Lord. Curvis thought, Will I receive rest like them?

The author creates a most elaborate after world with well sculpted characters and a great mystery--all in a short story.

I enjoyed this story very much and hope the author continues to write more tales from Necropolis. I see much promise there.