In honor of its release, I'm hosting an August Science Fest at lbelow.blogspot.com. During the month of August, I'm discussing the science behind Lurkers and inviting some fascinating guests to share their science-related articles. Oh, and did I mention there will be prizes? Every comment will enter you into the grand prize drawing, not to mention the weekly prizes. Mark it on your calendars and be sure to stop by! 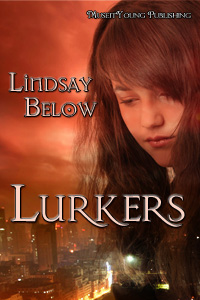 To say Kayla is bad at science would be a colossal understatement. So why does she carry the responsibility to figure out what went wrong? In the blink of an eye, everything she knows has changed. Her parents -- along with the rest of the adults in Toronto -- have disappeared, leaving her saddled with her whiny little brother. Luckily, she meets Jackson Sullivan, a fifteen-year-old scientific genius bent on finding out what happened. But he wants her help. How is she supposed to help sort out all this science stuff when she can barely pass her tenth grade science class?

As Jackson’s sidekick? Not in a million years.

Lindsay, I love your cover!! Very cool!!! Good luck with your science month.

Thanks so much, Barbara. Delilah did a fantastic job of capturing the essence of my book :)

Thanks for stopping by, Susanne. I'm glad you've enjoyed the post. I'm amazed at the quality of my guest posts, which are still to come.