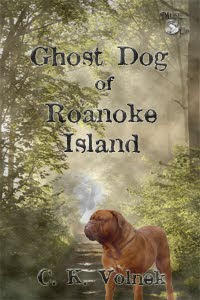 
Hello! It’s so nice to be here and meet so many new friends. And on a very special day, too! It’s my BOOK BIRTHDAY! (Read below for prize details!)

My name is C.K. Volnek and I live in small-town USA in the upper plains state of Nebraska, where I share my home and time with my husband and four Papillon fur-kids. Our three children have flown the nest for college or career. I’m a graphic artist and meeting planner by day, but now keep myself busy writing and blogging by night.

I am proud to announce my debut tween e-novel, Ghost Dog of Roanoke Island, is now available. It’s a tween ghost story with a twist of Native American folklore and based upon the mystery of the Lost Colony of Roanoke Island.

Here is the book description:

In 1587, 117 colonists disappeared from Roanoke Island…disappeared without a trace, leaving behind not only unanswered questions, but a terrifying evil.

Now it’s up to twelve year-old Jack Dahlgren to unravel the age-old mystery and save his family from the hateful beast that haunts the island.

With the help of newfound friend, Manny, a Native American shaman, and an elusive Giant Mastiff, Jack must piece together the clues of the Lost Colony to discover what really happened. Shrouded in ancient Native American folklore, it's up to Jack to uncover what the evil is and why it haunts his island. But can he destroy it...before it destroys him?

To be honest, I don’t remember studying the Lost Colony in school, so it was with great interest when I read an article about it a couple of years ago. My muse instantly became intrigued. How could a whole colony of people just disappear? No one knows what happened and it has remained a mystery ever since.

The story actually begins a couple of years before the Lost Colony came to the island 1587. In 1584, the explorers, Philip Amadas and Arthur Barlowe were believed to be the first white people to set their sights on North Carolina. Having been sent to the area to scout and investigate the land by Sir Walter Raleigh, they returned with glowing reports and two Native Americans, Manteo and Wanchese. The Queen and all of Britain were enthralled with the glowing news of this New World’s wonders.

Queen Elizabeth granted Raleigh a patent to this new land and named it Virginia. The next year, 1585, Raleigh sent a party of 100 soldiers, craftsmen and scholars to Roanoke Island.

This first colony of men was doomed from the beginning. They arrived too late in the season to plant and their supplies dwindled rapidly. Then, upon the supposed theft of a silver cup, Sir Richard Grenville and Ralph Lane led a march on the native village of Aquascogoc and burned it to the ground in retaliation, thus alienating themselves from the natives. Quite the dastardly deed, in my opinion. In 1586, the men had had enough and returned to England with Sir Francis Drake, abandoning their settlement.

Despite this last misadventure, Sir Walter Raleigh was not deterred. He recruited over 121 men, women and children to form a more permanent settlement and sent this new colony to Roanoke Island in 1587. John White was appointed Governor and among the colonists were his own pregnant daughter, Eleanor Dare, and her husband Annanias Dare. She gave birth to a daughter, Virginia, on August 18, 1587, the first English child to be born on American soil.

Unfortunately the colonists did not arrive to Roanoke Island until July and by the end of August supplies were already dwindling. The ships were returned to England, along with an anxious John White, to restock and return with supplies. Upon their arrival in Britain, White and his ship found themselves stuck in England, the invasion of the Spanish Armada imminent.

Finally, three years later, White was able to return to Roanoke Island. Arriving on August 18, his granddaughter’s third birthday, he found the fort deserted and no trace of the colonists. The only clue found was a single word “CROATOAN” carved into a post and the letters “CRO” carved into a nearby tree.

White knew the Croatoan natives were a friendly people, but despite a search of the area, no further clues were found. There were no bodies or signs of war with the natives. The colonists of Roanoke Island had simply vanished.

Today, the Lost Colony of Roanoke Island still remains a mystery. So, my muse decided to come up with her own idea what happened. I threw in a ghost and a twist of Native American folklore to complete the story. I hope you’ll check out Ghost Dog of Roanoke Island.

Thanks to all our readers for stopping by. I would love to hear from you. I always enjoy meeting and greeting my friends. Remember to visit by Book Birthday blog (www.ckvolnek/blog.html) and leave me a comment for your chance to win a FREE e-copy of Ghost Dog of Roanoke Island.

You can contact me at ckvolnek (at) yahoo (dot) com.
You can join me on my web page: http://www.ckvolnek.com/, or visit me at my blog: www.ckvolnek.com/blog.html.
You can also find me on Facebook (C.K. Volnek) or Twitter (CKVolnek), Good Reads and Jacket Flap.
My book trailer is on youtube: http://www.youtube.com/watch?v=RbJEF9TjZzo
My book is available at:

Yay!! C.K. is one of our YAlitchatters!!! Congrats.

Thanks to my fellow YALitChatter! :-) So nice of you to share my day with me. And thanks Catherine. Appreicate you stopping by and leaving me a comment. Raising a cup of punch...Cheers!

The book looks stunning, Charlie. Hope you sell thousands and thousands of copies. It's on my list and I can't wait to read it. Happy Birthday!

Thanks for stopping in Joylene. I had a wonderful Cover Artist. I can only hope to be the next JK Rawlings. lol. thanks again.
C.K. Volnek

Best wishes on the release, C.K. Ghost Dog has been on my TBR list for months now. Can't wait to read it.

Another happy release wish for you.

Hi Mike, C Lee and Darby. Thanks so much for coming to my party! It's been very humbling to have so many people wish me success with my new book. I'm so lucky to have such wonderful friends and peers.
C.K. Volnek

Congrats, Charlie. I recall learning about this incident in school. How great that you worked it into a ghost story! Best of luck with the release.

Hi Pat. Thanks for stopping. It's such a great mystery. I didn't remember studying it in grade school, but when my muse caught it in an article I was reading, she ran with it. Thanks again for leaving me a note.
C.K. Volnek

True stories always have that added appeal when applied to ghost stories and mysteries. This is going to be a winner, Charlie. Congratulations!

Thanks Rosalie. I can only hope you are right. Would be so much fun to have a hit on my hand. :-) But I just hope everyone enjoys the story and takes a small lesson of tolerance from it. Thanks for stopping by.
C.K. Volnek

Charlie, ever since I saw the blurb for your story... way back when:) I was fascinated by the idea of a whole settlement vanishing and the mystery you have built around it. It will be on my long tbr list!

Congratulations on the release!

Hi Sara,
Thanks for stopping by. This mystery is just fascinating. My muse just grab hold of it and wouldn't let go until her story was out. Hope you enjoy it.
C.K. Volnek

Happy Book Birthday, a little late. Your book is on my list becaues historical fiction is one of my favorite reads. Great cover too. Best of luck with your book and tour.

Thanks Beverly! You always make me smile. And thanks for the lovely comments on my cover. I had a wonderfu CA. Thanks!
C.K. Volnek