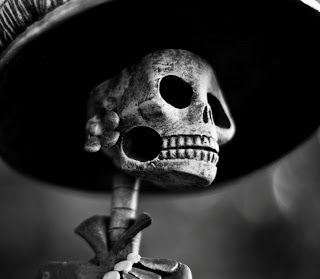 BONELLA: Well, well, well, the witch herself. Let me begin by saying you can sing Dixie for as long as you want because my crypt is deep within the folds of earth where fire ignites my thoughts. And if you need this translated: GET REAL, TRUSCAN LADY, you don’t scare me. Now, shh…be polite, this is, after all, your interview.  So are you dyslexic? Don’t know how to spell ‘night” or couldn’t decide if the ‘k’ looks better than the ‘n’?

GAIL:  Well, I don’t usually come right out and admit it, and I prefer the term “Person of Power” ‘cause “witch” tends to scare folks, but since you pegged it, I guess I have to confess, we’re not supposed to lie about it if flat out asked.  But you know that, don’t you?  ‘Cause after all, it takes one to know one.

BONELLA: Hate to disappoint, Knight Lady, but I’m a SKELETON…one with powers…and friends…but then again maybe I just misread and you wanted to add a B?

GAIL: and I’m sure at one point you had one – a fairly respectable IQ, I mean – but probably the pressure of living in that crypt deep within the folds of the earth has molded your brain.  Not to mention the aforementioned fire probably fried it.

BONELLA: I still got my fire…didn’t POPS mention how much he enjoyed MY PAR-TY?  By the way, I almost choked reading that your Tess character is a troubleshooter for a CEO. Really? And how the heck would you know about troubleshooting? No, I don’t mean how many ounces to add into a cake mixture…GEEZ! Where in the heated pit of hell did Lea find you writers? So come on, don’t waste this interview…why is Tess the best character in your book?

GAIL: You think the heated pit of hell is bad?

BONELLA: Nope, never said that and don’t put words in my mouth…B…oops…Witch!

GAIL: Try getting ready for trial, baby girl.  Not to mention I lived through three teenagers.  Though honestly, the lawyers are more trouble than the kids ever were.  Now, what did you really ask?  Oh!  Tess.  Tess cuts no slack and takes no prisoners.  I mean, she throws a glass of wine in the face of the most powerful man in Trusca!    Com’on, any modern American woman who can take a parallel world that runs on magic and make it her own – that woman rocks!

BONELLA: Wait…I’m intrigued…magic? Parallel world? Now you’re talking my domain. So what’s up with this?

GAIL:  Not up.  Sideways.  It’s a parallel world.  Einstein’s theory of relativity.  Bodies co-existing simultaneously in the same space but in different dimensions.  Com’on, even my youngest  son knew about that when he was ten!  We had a fascinatin’ discussion on the subject on the way home from school one day.  Besides, didn’t you ever watch He-Man?  Or Power Rangers?  Jeeezzzzz, lady, you’re deprived.

BONELLA: He’Man? Power Rangers? I’m more of a Bite Me Drac type of a gal, ya know?

You ain’t in Kansas anymore? That’s your tagline? You want folks to think they’re getting an Oz book? So where exactly is this Kansas setting in your book?

GAIL: Witch-ita.  Ever hear of it?  No, seriously, the line reads, she ain’t in Kansas anymore.  Not that she is.  In Kansas.  Something every child raised on the Wizard of Oz knows mean – wherever the heck you are, it ain’t home.

BONELLA: HA HA HA…now it makes sense. You grew up near or rather ON the banks of Stone Creek Swamp so the polluted water messed up your brain cells. I get it…I’ L L T Y P E S L O W E R A N D B I G G E R knowing you’re challenged. Hehehehehehehehehe So which banks did you swim in? You like them polluted? Dead fish? Lots of vines? Rocky…muddy…stinky…WHAT!

GAIL:  Actually, I can’t swim.  Folks used to think witches floated, so they threw ‘em in the water, tied and weighted down.  If you were a witch you’d float and they’d burn you.  If you weren’t, you’d drown.  I figure that happened to me at least once or twice, left me with a lifelong aversion to large bodies of water… But back to the swamp thing – Southern swamps are slap full of Voo-doo and Hoo-doo, didn’t you know?  No, probably not, you’re in the deep dark crypt ignited by fire.  Though magic’s not confined to the swamps down here.  Country folks still visit Root Doctors.  Didn’t you know?  Potions for everything.  Love, death, health, wealth.  I even make mention of ‘em in Down Home, my second Muse book coming out in September.

BONELLA: No…this can’t be true. What is wrong with these Muse editors. They gave you another contract? Wait…parallel worlds…so this new one takes place in outer space?

BONELLA: This has been truly a vomitified interview. Allow me time to wipe my mouth, breathe heavy on you, and now show you to the door. Thank you. End of interview.

GAIL:  If you can’t take the heat, get the author out of the kitchen, huh?

BONELLA: By George, it only took her a whole bloody interview to realize this…
Posted by MuseItUp Publishing at 3:09 PM

Way to go, Gail. You held your own with Bones.

Great job Gail giving Bonella what for. And I loved He-Man and She-Ra both when I was a kid.:-)

Gail...I knew if you went head to head with that bag of bones, you'd win. See how mad and frustrated Bonella got at the end? You had no problem taking the heat. Actually I'd love to see round two with you guys. Maybe turn the heat up enough to cremation.

Hugs, I proud of you.

Gail, loved how you took on that bag of bones, Bonella. My daughter loved She-Ra when she was younger. Also love how you got Bonella so frustrated she needed to get you out of her house. By the way, didn't you find some of her rooms creepy? I'm here for you if she comes after you. But I know you can handle her. Anyone who can handle three lawyers can handle anything. I've been married to one for 46 years and I think I'd rather go up against Bonella! Great interview!!

Score: Gail 1 - Bonella zero with the rim removed. The bare bones of this interview are plain to see; the bonny lass takes the prize, the boney one has to knuckle down and admit defeat.

Thanks guys! It's 7:30 a.m. my time, I got up at 7:00 which is late for me, and I just saw where my interview was posted! I knew I could count on all you guys for a circle of protection and I'm there for all of you when Bonella looms! (You think Bonella realized what she actually said there at the end?) Oh, and Barbara -- you're right darlin'. Anybody deals with lawyers all day, Bonella's child's play!

I'm still giggling over Witch-ita, KS. I'd say it was getting pretty heated in the kitchen, but mostly it was from Bonella's frustration with you standing toe to toe, er toe to toe bone with you. Great job! I'm still smiling....

As is her usual, Bonella blusters and flusters and sheds more dusts. Gail, in the face of a moldering comilation of an illusionararily cohesive dust sculpture without substance you held strong. WELL DONE!

You held your own Gail with poise and grace! Well done against a lot of hot air:)