An Early Halloween by Nathaniel Tower 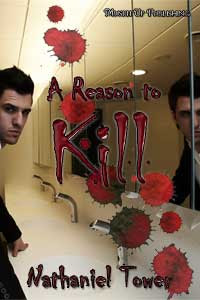 Nathaniel Tower, author of A Reason to Kill
A few years ago, when I lived in an odd neighborhood where our next door neighbors moved out at midnight on Christmas Eve, there was a strange house that decorated for Halloween during mid-summer. They didn't just decorate in the standard Halloween fashion of some pumpkins and ghosts and tombstones. The entire yard was covered, as was every inch of the front of the house. I'd never seen anyone with such an elaborate (and tacky) Halloween display, and I'd certainly never seen one this early. They had it up before the stores even put out their Halloween candy. Anyway, the story below is inspired by this occurrence. I always wondered what might have gone on in that house. Oh, and possibly the most bizarre thing, they never decorated again.

It was the crisp and humid eve of August 27th when they first noticed the glowing orange lights emanating from the perimeter of their neighbor's lawn. They simultaneously double-taked, rubbing their eyes to make sure what they were seeing was not some strange side-effect of the sticky air.

The house across the street was fully decorated for Halloween, more than two months early, decorated in a fashion that far overdid what any Halloween display should be.

"Do you think they got their months confused?" Donna asked her husband Jake as they continued to gawk at the array of dangling skeletons, crucified witches, creeping spiders, and ominous tombstones that engulfed the yard.

"I'm not sure what to think," the incredulous Jake responded, "other than that these people have completely lost their minds."

Jake and Donna White hadn't ever really met their neighbors. Their interaction had typically been limited to casual glances when bringing in groceries or mowing the lawn. Occasionally, they would even exchange a wave of recognition as they pulled into the driveway, and once, the man of the neighboring family, whose name they thought was either Jared or Duncan, had asked Jake for a jump start when his van died in the middle of the street. Jake of course happily helped out his neighbor, but he never bothered to learn for sure what the man's name was.

The Whites had been living on Morton Street for a little over a year. It was an odd little street, its mouth in the middle of a short bypass road and only running for a mere block before dead-ending at a set of frequently used railroad tracks that stereotypically separated the good part of town from the bad.

Perhaps the oddest thing about the Halloween decorations, even odder than their timing, was the fact that they existed at all. The Whites thought back to Christmas when not a single house on the street had been decorated, which had in turn prompted them to scale back their own decorations significantly. The house hadn't been decorated last Halloween, nor had it ever been decorated with so much as a banner or a flag, and the people living in the house had resided on the block longer than the Whites had, so Jake and Donna simply could not figure out the reason for this sudden enthusiasm in Halloween.

Jake and Donna asked around, telling their friends, family and coworkers about the absurdity of the early Halloween decorations. No one had ever heard of anything like this, which left Jake and Donna wanting to know the secret behind the Halloween bug the neighbors had caught.

A few weeks later Jake and Donna decided to invite the neighbors over for an early autumn barbecue. Jake walked across the street to the Halloween house and knocked on the door using the newly installed spider knocker. After a few moments, the door mysteriously swung open, creaking slowly as it revealed an open foyer. Jake looked around confused for a moment before he heard a soft voice say, "Man, this door really needs oil. How can I help you, neighbor?"

"My wife and I want to invite your family over for a barbecue this weekend," Jake said to the mid-heighted man standing before him.

The man stared at nothing in particular as if he were deep in thought. "Hmm, this weekend you say," he whispered. "Well, I think we're free on Sunday afternoon. Does that work for you?"

"That would be wonderful. Around 1 o'clock then?"

"We'll be there. Shelia will bring some dessert."

"Alright, if you must." With that, Jake walked away without saying goodbye.

"How'd it go?" Donna asked when he returned.

"Lovely. At least we know one of our guest's names."

Sunday didn't come quickly. It was like the week before a child's Christmas. Every night they had to stare at those orange lights and hanging goblins. Every morning as they left they drove past the makeshift graveyard. Their minds oozed with curiosity, and there were times that Jake just wasn't sure that he could wait that long to learn the truth.

When Sunday finally did come, the guests arrived promptly. Jake and Donna opened the door and greeted their guests with the awkwardness one always has when talking to someone they have met but don't really know.

Donna spotted it first. In Shelia's hand was a plate of Halloween cupcakes. White cake, orange frosting, sugary ghost toppings. As the Whites led their guests to the living room, they snuck each other a "What the hell is wrong with these people?" glance.

"Where should I put these cupcakes?" Shelia asked with a proud smile.

"I'll take them," said Donna reaching out her hands. "Can I get you something to drink?"

The man spoke first. "Do you have any fruit punch?"

Jake looked at him strangely, studying him, wondering what kind of grown man asks for fruit punch.

"Sorry, we're fresh out. But I do have some lemonade," Donna said hospitably.

"That's okay. I'll get by," Mr. Halloween said with great disappointment, as if every household had gallons of fruit punch on hand.

"I can run home and get some, dear," Shelia suggested. "Donna, you can come with me if you'd like."

Donna was stunned to know that Shelia knew her name. She gladly accepted the invitation, leaving Jake alone with Mr. Halloween.

"So, I noticed you haven't decorated yet," the man began almost immediately after the wives had left.

"We haven't gotten around to it yet," Jake said.

"Where's Donna?" Jake asked in a bit of a panic.

"Oh…" Shelia began with a nervous glance at her husband. "She went to the store to buy some ice. We can't drink fruit punch without ice."

"But we have plenty of ice here—" Jake began.

"We don't use ice from tap water," Shelia quickly interrupted.

Jake noticed a red stain on Shelia's yellow shirt. "What's that?" he gasped with a shaking finger outstretched.

"Where is the fruit punch anyway?" he inquired fearfully. He stood up from the couch without waiting for a response and walked to the front door. Peering out the windowpane that lined the brown door, he noticed that both of their cars were parked out front. Donna clearly hadn't gone to the grocery store.

"Oh, we left the fruit punch in the fridge to chill until she comes back with the ice," Jake heard Shelia say as he stared out the window. Through the glass, the house was distorted and unevenly shaped. It truly looked haunted.

Perhaps it was all just a practical joke. Donna may have set up the whole thing, including the early Halloween decorations. There was no other way to explain the idiocy of decorating for a meaningless holiday over two months early.

"So, I see you guys are really into Halloween," Jake said cheerfully as he turned away from the window to the couple.

"It's the new Christmas," Shelia said in a joyous voice.

Jake was dumbfounded by her response. Was this woman really comparing a day of witches, ghosts, ghouls, and goblins to the birth of Jesus? Even from a nonreligious standpoint, handfuls of candy and costumes couldn't possibly top mounds of presents and family togetherness around the Christmas tree. These people were clearly lunatics.

"Well, I guess we'll wait for Donna to get back before starting the food," Jake said as he plopped into his recliner.

"I'm really thirsty," Shelia's husband said. "Can you go get the punch now? I'll drink it warm if need be." The words came out almost spitefully.

"Okay dear. I'll be back in a few minutes," she said with a mischievous smile.

Shelia showed herself out the door as the two men sat in their respective seats. After she left, Jake contemplated asking what the hell was going on, but he decided against it.

When Shelia returned, punch in hand, the man was sitting alone on the couch, staring at the blank television screen that reflected his motionless image. "Where's Jake?" she asked. The man shrugged. "Do you want to drink this here or at home?" She held up the punch. He stood and walked to the door, his wife following him. They walked across the street together, hand in hand, and when they reached the front steps lined by dormant orange lights and foam gravestones, the man planted a kiss on his wife's cheek and said, "Happy Halloween."

That night, the Halloween lights did not brighten the always-darkened street.

By the time the Whites were found in their own basement—a week before Halloween—the decorations had all been removed.

For more about me, visit here.
Posted by Nathaniel Tower at 7:45 AM