And in the spirit of treating instead of tricking- don't lie you know dang well you want to turn up the Scary Sounds CD and Halloween Scream Tunes, put the speakers up to the window, and scare the living heebeebeegeebees out the of the neighbor vermin-er kids, yeah kids.
I'm calm, really. I would never, ever.  Maybe.
Here's a sneak peak at next month's delectable Fate and Fangs' tale, Debauchery: Victoria's Burning....
In Professor Welshire’s fourth Fate and Fangs chronicle, Victoria uses the fallout from the American Civil War to her advantage-or so the beautiful but deadly blockade-runner hopes.  After all her using, abusing, and feedings, Victoria’s slaves finally take matters into their own hands, forcing Antonio’s daughter to face her own mortality... 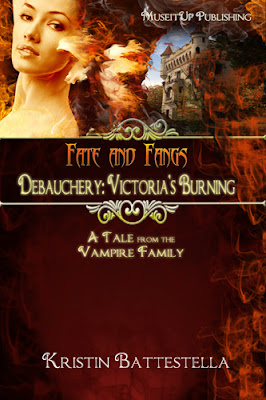 Hello Mother,
I have never conformed to normal societal standards; you know I have looked after my own cares, perhaps even selfishly some might say. However, amid this sad state in America’s affairs, it was in my best interests to marry.  Yes, marry.   I’m sure you wish to know his titles and ancestry for your histories, but none such matters to me. His name isn’t even important, for he wasn’t around long.  His funeral is tomorrow in fact—a gentleman’s funeral for a wealthy gentleman from North Carolina.
I apologize if I’m late in my correspondence.  You know I don’t like to write. I imagine you might have wished a traditional spectacle at this news, Mother, your one moment of pride and pretense that you have a normal daughter and a proper family.
Ha!
Whew!  Smell my feet my foot.
Have you decided yet?
Fate and Fangs: Tales from The Vampire Family
Feel Love, experience Punishment, know Struggle, indulge the Debauchery, crave Lust, learn Humanity, face Resurrection, and choose: Fate or Fangs?
http://vampfam.blogspot.com
http://jsnouff.com/kristin
http://kristin724.livejournal.com/
http://www.facebook.com/pages/The-Vampire-Family/157922293588
http://www.myspace.com/kristinbattestella
http://groups.yahoo.com/group/kristinbattestella/
http://www.facebook.com/kristin.battestella
Posted by Kristin Battestella at 5:00 PM