A Halloween Tale - The Burberry Scare 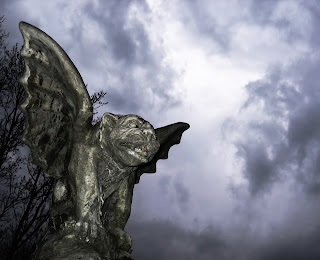 I love a good ghost story. As a child I was the one everyone looked to as we sat around the campfire. Blessed with a most active imagination, I would spin a scary tale sure to keep everyone up all night.

As we prepare to celebrate yet another Halloween, I’ve written a short little tale, in hopes to shock and scare your muse and force you to check over your shoulder as you venture out to ‘trick or treat.’ Enjoy! And Happy Halloween.


The Burberry Scare
By C.K. Volnek

Eugene eased his make-shift hoe next to the large round pumpkin, careful not to snag anything he shouldn’t. He clipped the stray weed invading his patch and leaned back, his chest puffed out with pride, thumb hitched in the frayed rope he used as a belt. Any time now, the Governor was bound to drive by.

He spat at his hand and smoothed the greasy black shock of hair down against his head. “I must remember to thank Maeva for the special pumpkin seeds,” he said to himself, swiping a dirty hand across a mouth full of discolored teeth. “Josiah will be one jealous lout this year after I win the prize for the most bountiful pumpkin patch.”

Eugene could almost feel the jingle in his pocket—accolades from the Governor for tending his field so well. It was a bumper crop, thanks to Maeva. Five times as large and four times as many as last year. Yup, the Governor would be most pleased.

A scream cut through the still evening, followed by the crashing of tree limbs. Willow Harrison charged toward the patch like a scared rabbit, her eleven-year-old face white as a ghost, her long skirt billowing about her legs.

“No! Stop!” Eugene yelled and threw up his arms. She was rushing right toward his pumpkins. No telling what kind of damage she’d do.

Willow continued running, staring back into the trees lining the patch. She shrieked again, but her voice cut short as she crashed to the ground, her black boots entangled in the prickly pumpkin vines.

“You darn, fool brat,” Eugene raged, running down the narrow trail he’d maintained in the center of his crop, stepping gingerly through the creepers. He gasped as he gazed down at Willow, her elbow pierced right through the thick rind of a pumpkin. A thick orange liquid puddled on the ground next to her leg. Eugene’s mouth gaped open and closed like a mud-loving catfish, his face turning beet red. “Lookee here what you done! You dang no-good monster.”

Willow jerked to stare at Eugene. “What?” She pushed herself up, staring back at the woods. “But something is...” With a sickening crack, she stepped on a thick pumpkin vine, breaking it in two.

Eugene shrieked and grabbed her arm. “You’re gonna pay for that,” he sneered, pushing his face in front of her so their noses almost touched. “I done told you dang kids to stay outta my pumpkins. And now, you’re gonna pay. The Governor’s gonna to want his due.”

“I, I don’t have any money,” Willow croaked, trying to pull her arm free of Eugene’s vice-like grip, her eyes still flitting about the trees.

A loud screech echoed in the dark trees and Willow’s eyes widened even more. “There’s a monster in there, Eugene.” She pointed a shaky finger the way she’d come. “It chased me clear from Nathanial’s”

Eugene stared up at the inky blackness within the heavy branches. He shook his head. Crazy fool kids. Just like their parents. What was it with the people of Burberry spinning all these crazy stories of some durn monster terrorizing the hills? They just wanted to make trouble for him, prevent him from providing the Governor with the best crop of pumpkins ever.

“You’re such a scaredy,” Eugene scoffed, waving a pointy finger at Willow. “It’s All Hallows Eve. Those fool boys are just playing a prank on you.” He rolled his eyes and pushed her to the edge of the patch. “Now, you git on home, and make sure you git me my money.”

Willow took one last look at the woods and dashed off, heaving through the tall grass and jumping over the small creek at the edge of the meadow.

Eugene watched her disappear around the bend in the dirt road, her long hair streaming behind her like a flag. “Stupid girl,” he spat and returned to his pumpkins, fussing over the crushed leaves, trying to splint the broken vines. It just wouldn’t do for the Governor to see this.

He raised a bushy eyebrow at the orange goop surrounding the broken pumpkin. At least she’d managed to destroy a spoiled pumpkin. He turned is so the Governor wouldn’t see.

Branches rustled from within the trees. Eugene looked up, expecting a gang of ruffian Burberry boys to come blaring out, a hooting and a cackling. No one appeared. Only the oak’s leaves quivered in the hush of the nearing dusk.

“Dang hoodlums.” He’d give them what-for. “Come out here, you durn kids,” he yelled at the trees, shaking his fist.

Still no one appeared.

The trees rustled again followed by heavy breathing. Eugene peered harder but the forest revealed nothing. Dread crept into his stomach. His heart pounded as a shiver raced down his back.

“George? Lucas?” he called, the hard edge gone from his voice.

A growl drifted out from the trees.

“Come on out, boys.” Eugene cleared his throat, trying to hide the shaky vibrato.

The talk of the townsfolk skittered through his head. A demon. Flying monster. Dragon. Eugene swallowed. It couldn’t be. There was no such thing. Was there?

Eugene stepped back, cringing as he snapped a pumpkin vine with his heavy work-boot. The shadow shifted in the trees, even darker as the sun waned beyond the horizon, bathing the patch in an orangey glow. Red eyes appeared from within the trees, staring harshly at Eugene. The shadow moved again, the ground trembling. Eugene’s knees quaked and he leaned against his hoe to keep from falling.

Eugene jumped as a terrifying screech filled the evening air, like a thousand cats being skinned alive. The smell of sulfur and smoke stung his senses, singeing his nose and burning his eyes. He glanced about, but there was no place to hide. His shed stood a good quarter of a mile away. The only thing between him and safety was his pumpkins.

In a flash, he jumped behind the closest pumpkin. It hid him easily. As big as a cow, it was. Eugene peered over the top as the beast broke into the golden glow of twilight. It was horrid. Black and deformed. Shoulders like an elephant, claws like razors, wings like a giant bat, the tail of a lion, and its head…a grotesque square with red eyes, fangs and horns. As gross as it was, it was strangely familiar.

Eugene’s heart quickened. The monster was coming…straight toward him. He’d be sliced to ribbons and chewed up like a lamb chop. He rested a hand against the pumpkin to try and stop his trembling. Was he not to see his award for his pumpkins?

His pumpkins! He glanced back to the beast. It would easily crush his crop. And the Governor would pass him by again for Josiah. Eugene’s blood boiled at the thought. Gripping his hoe, he burst out from behind his pumpkin and charged toward the creature.

The beast screamed and reared up, raking at the air with sharp claws and flapping its massive wings. It gnashed its teeth, its red eyes glaring with hatred. For a second, fear clawed at Eugene’s belly again…until the beast slashed at the closest pumpkin, ripping it open, from top to bottom. That was all Eugene could take. He raised his hoe, and rushed the monster, swinging the sharp edge at the beast’s throat. The monster screamed as the blade connected with its neck, slicing the black skin, spattering dark purple blood across the pumpkins and vines. The creature staggered backward, swinging its grotesque head from side to side, its cry echoing into the growing night. With the sound of a tree falling, it collapsed at the edge of the pumpkin patch, the red glow fading from its eyes, frame stiffening to a hard gray.

Eugene watched the beast with disbelief. Inching toward it, he tapped its horrible head with the hoe, muscles poised to jerk back if it moved. The beast was dead. Turned to stone. He’d killed it. A warped grin spread across his face. The whole town was sure to profess him a hero! The Governor too. Smiling, he examined the monster’s head, searching his memory for where he knew it from. As if struck by lightning, it hit him. He’d seen this creature on top of the Magistrate’s. It was the stone gargoyle.

“But how could that be?” Eugene muttered to himself. How could the gargoyle come to life? And what was it doing in his pumpkin patch? He gazed at his prize pumpkins and made his way to the one the gargoyle had sliced open, wondering how he was going to hide this split from the Governor. A cracking sound filled the night and the pumpkin burst open. Eugene jumped back. More cracking erupted from all corners of the patch as more and more pumpkins shattered, opening to the full moon just cresting over the trees. In the soft silver glow, baby gargoyle heads rose up out of the pumpkins, red eyes staring at Eugene, fangs gnashing, screaming out their hunger...
The End.

Have a happy, and hauntingly great, Halloween!

Great story! Had me from the first sentence. Loved the ending. Poor Eugene.

I didn't feel too sorry for Eugene! Have to say, I didn't see that ending coming. Good job, Charlie!

Hi Roseanne and Pat. Thanks for stopping and leaving me a note. Glad you liked the short story. Was a fun little piece and I'm glad I was able to surprise you with the ending. :-) Happy Halloween!
C.K. Volnek