I THINK this is my day to post Spooked 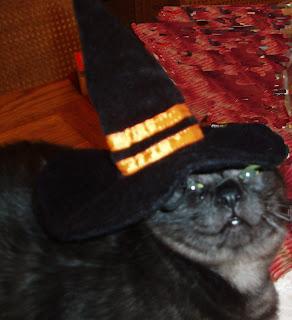 If it isn't, please let me know and I'll pull it! Anyway, here is a short story I wrote for the occasion:
Spooked
by
Heather Haven

Cliff adjusted the eye-patch and scrutinized the perfect but expensive pirate’s reflection in the full length mirror. From black leather boots to golden earring, he looked real enough to sail the seven seas. And just as lusty. Women liked that.
“You’re one handsome SOB, Cliffy Boy, if I do say so myself.” He let out a raucous laugh. “Especially now that you’re a widower.”
The doorbell rang. He grumbled about early trick-or-treaters as he went to the door. He wanted to leave momentarily for the Halloween party, hoping to score big with that hot Jocelyn, from the life insurance company. It was so nice when employees from the very company paying off for your wife’s demise also put out. Two short months of her being dead and he’d never seen so much action. All those babes just waiting to comfort him.
“Ahoy there, matie!’ He flung open the door, posed then looked up and down the hallway. There was no one. Out of the corner of his eye, he saw a small creature scurry across the threshold and into his apartment.
“Damn it to hell,” he bellowed and turned around to see his dead wife’s black cat run through the living room and out onto the terrace, the terrace from where he’d helped his wife to her untimely but necessary death. After all, she’d been cramping his style.
That day he would have tossed the beast over the railing, too, if he could have caught it. But right after the ‘accident,’ it ran out into the hallway meowing at the front door of their nosy neighbor, who’d scooped it up and took it inside. Ever since then, anytime he would step into the hallway to go to work or out on a date, the cat would be there, staring at him from the other side of the neighbor’s transom.
Now the cat leaped onto the ledge of the terrace railing and turned around. It crouched, tail lashing back and forth, black fur rippling in the wind off the Hudson River. Sharp green eyes glared at Cliff in an accusatory way.
“Damn it to hell,” Cliff repeated, crossing over and onto the terrace. He closed the sliding glass door, trapping him and the cat outside. The Manhattan skyline was darkening and the feline’s ebony-colored fur blended in with the on-coming night. But its emerald eyes glittered more intensely than any light in the city’s panoramic view behind.
“So you want to play, do you? Well, you’re dead meat, cat. I’m sick of dealing with you.”
The cat growled and hunkered down atop the cement railing of the barrier separating the terrace and the earth 42-floors below.
Cliff moved forward, unsheathing the large plastic sword from his belt. “I don’t have to come near you,” he yelled, raising his arm and preparing to strike. “Just a couple of swipes with this –“
“Now, Cliff,” a feminine voice chastised. “That’s hardly fair.”
“Who said that?” Cliff dropped the play sword and staggered back, banging into the closed glass door. He felt his heart thud in his chest. “Who’s out here? Show yourself! Who are you?” But he recognized the voice.
“You know who I am.” The tone was melodious yet firm, dripping with venom. “It’s one thing for you to do away with me, but an innocent little animal? That’s too much, Cliff, even for you.”
He looked in the direction of the voice and saw a small shimmering cloud, hardly more than a vapor, forming into the features of a face, his wife’s face.
Cliff let out a short shriek, turned and scratched at the handle of the sliding glass door. It slid open and he fell back into the room. He wheeled around to see his apartment, nothing more. Sounds of his heavy breathing filled the empty room.
It must have been the curry he had for lunch or the spicy lamb shish kabob! Well, never again, he vowed, with a shaky laugh. Time for that party, he thought, and stepped forward. An icy wind raged on his face, so cold his eyes began to tear.
“Where do you think you’re going, Cliff?”
The countenance was now in front of him, drawing closer, more solid, emerald green eyes flashing. Pushed back by the vision, Cliff found himself outside again, panicky steps taking him along the perimeter of the elegant, plant-laden terrace.
He neared the cat still on the handrail. It reached out, swiped at his hand, and drew blood. Thrown off balance, Cliff tripped over one of the potted plants his wife so dearly loved. He heard the cat screech, felt talons and fangs strike, and saw two sets of flickering green eyes, as he fell backward. He surrendered to the toppling over and the drop 42 stories to the pavement below.
On the way down and in between his screams, he thought of something odd. He’d never noticed before how his late wife’s eyes and those of the cat looked one and the same.
Posted by Heather Haven at 11:59 AM

Ha! Super twist to this one. Loved the cat in the hat, btw!

Thanks for the visit to the Write Game. Really appreciated your stopping by to comment on the ghost story.

Thank YOU for loving the pic of my cat, Ellie. She is one of the lights of my life!

This is strange I left a comment yesterday, but it's not showing up. I think goggle ate it.

That cat looks right at home in the witch hat, Heather. Enjoyed the story. Wonder if anyone at the party will miss Cliff?

Vampires is not at all like in the movies or books. Sure, I understand. You are young you have the whole world open to you. You can be anything that you choose if you apply yourself and try hard to work toward that goal. But being a Vampire is not what it seems like. It’s a life full of good, and amazing things. We are as human as you are.. It’s not what you are that counts, But how you choose to be. Do you want a life full of interesting things? Do you want to have power and influence over others? To be charming and desirable? To have wealth, health, and longevity, I can help you solve any problem you are having
(1) If you want your ex back.
(2) If you want to stop having bad dreams.
(3) You want to be promoted in your office.
(4) You want women/men to run after you.
(5) If you want a child.
(6) You want to be rich.
(7) You want to tie your husband/wife to be yours forever.
(8) If you need financial assistance.
(9) If you want to stop your divorce.
(10 Iif you want to divorce your husband.
(11) If you want your wishes to be granted.
contact the Vampires Lord on his Email: Richvampirekindom@gmail.com