A LOVE Letter from Ann

(And the Chocolate smothered Brandy drenched Viking Vampire that's racking up the chat totals one 7 minute session at a time is here, too!) 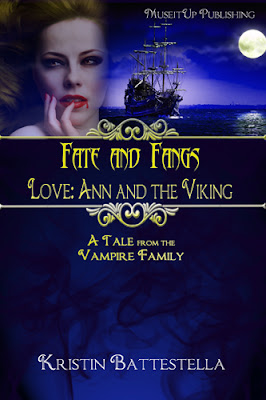 Professor James opens his Welshire Coven vault and presents the earliest manuscript from the fantastical archive, but the 13th century was not a happy time for scorned vampire mistress Ann.  She leaves the then young Vampire Family and its cheating patriarch Antonio Welshire behind to travel across Britain in search of, well, she doesn’t know what. Desire? Belonging? When Ann encounters a handsome and wayward Viking named Eric, however, her dead heart is rekindled.  Can Ann accept her true vampiric nature or will her dark desires conflict with her Nordic lover and their high seas adventure?
This man was handsome.  He was worn in the face from battle, yes, but fair, with no blood upon his cropped beard.  Ruthless and careful in his skill he was, surely, but nonetheless sexual and charming.  Why had he killed his own warrior?  This was no small question, but it was somehow trivial to me.  For the first time in a great while, I was thinking as a woman, not a vampire, and I wanted this strong man to know me as such.  As my blood desires faded, I felt my eyes calm and my fangs dull.  The warrior noticed these changes with a smile, for he was no more afraid of me than I was of him.
“You are not like the women of this realm, are you?” His speech was softer than his brutish companion, more distinct and learned, but firm.
“No.”  I held my tone in his air.  Antonio had no room for me.  I was not his wife.  This strange man, however, in his foreign armor from his embellished ship—I knew he was my equal.
“Are you of the old ways? A witch as some say inhabits this land?” His eyes were upon me, as if he knew the answers to what he asked.
“Not truly.”
http://museituppublishing.com/bookstore2/index.php?page=shop.product_details&flypage=flypage-ask.tpl&product_id=183&category_id=3&option=com_virtuemart&Itemid=1&vmcchk=1
You know you want to!  $2.50 for that Heavenly allotment is a steal!
http://vampfam.blogspot.com
Posted by Kristin Battestella at 10:18 AM