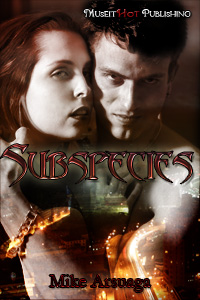 HALLOWEEN TRADITIONS IN OUR NEIGHBORHOOD
OR
A SHORT STORY
by Mike Arsuaga, author of the paranormal romance - Subspecies, Inc. series
My Central Florida neighborhood is only ten years old and Halloween typically is a shirtsleeve evening. No dark haunted mansions expected here for at least sixty years. Chilly night winds associated with Samhain, as the ancient Celts called the holiday, don’t howl around eaves and through the broad avenues of Vista Lakes. Furthermore, the tropical foliage and palm trees do not lend themselves to frightening images of gnarled dead copses of oak and hardwood. The nearest cemetery is more than fifteen miles away.
Bereft of the traditional components of Halloween we improvise. To encourage ghostly participation many neighbors set up coolers in the front yard. Beer for the adults, soft drinks for everyone else, and don’t try fake ID because the seven foot tall robotic werewolf on the Shelton’s front porch is no robot. Don’t believe me? See if you can find a power plug. Better yet, pluck a whisker from his chin. His name is Petro, after the monstrous lycan from my novel “Subspecies, Inc.” The Sheltons are fans.
Another tradition unique to us is one, in all modesty, I started. We have an eight pound Yorkshire terrier. During the school year I ride my granddaughter to and from school on a bike. The dog fits neatly in the handlebar basket. Two Halloweens ago, I dressed up as the Wicked Witch of the West. When Petro requested help enforcing the drinking age rules, I put the Yorkie, Thumper, in the basket and saddled up, accompanied by a tape of the refrain from “The Wizard of Oz” when Margaret Hamilton was pedaling little Toto down a dusty Kansas road. The tape volume kicked up a notch with each beer I consumed. The goal was to keep adult beverages away from any who would aspire to under- age drinking using any means possible. At the time it seemed like a good idea. The next day, not so much.
A group of teens like to gather in a turn-around at one end of our street. Wooded wetlands press up, practically to the sidewalk. The youngsters delve into the palmettos becoming invisible from the road in their nefarious twin pursuits of smoking and making out. This is an all year long activity. Any other time the respective parents police the practice but on this most magical of nights, old Wicked Witch – with bike but not dog, a Jason, and two werewolves stalked the young miscreants, bent on scaring them so their unborn great-grand- children would wet pants on the anniversary of this event and not know why. In the next block, Petro growled under his breath enjoying the unbridled terror soon to break over the neighborhood.
As we closed in for the Fright of the Century, the first sign something was wrong came in the form of a low chant and the glow of firelight.  In the clearing ten or twelve teens of both sexes circled the light, now a bonfire rising six feet. They undulated and touched each other while chanting in a language for sure I never heard before.
Then old Russel, one of the werewolves, stepped on a dry branch alerting the quarry. As one, the young faces snapped around to the noise. A pair of eyes glowed red from each shadowed face, a lava colored gleam I suspected was independent of the fire. With a simultaneous howl, they picked up pointed sticks and took after us.
We hit the street pavement running and didn’t stop until each of us was behind a locked door. Tomorrow, I decided, would be soon enough to retrieve the bike.
The next morning, Petro still sniggered as we crated him for another year.
Posted by MuseItUp Publishing at 5:00 AM

Oh, dear. Another classic case of the hunters becoming the hunted. Enjoyed picturing you with bike and Toto!

Enjoyed reading this post! Thanks for the great humor.

Thanks for the kind words. Actually my granddaughter sort of came up with the idea.

Oh yeah, I experience the same events as you in my Florida neighborhood...only it's a bunch of wild and crazy seniors drinking and howling at the moon wearing costumes or nothing! What a fun night....LOL..

I tried commenting once without luck. So here goes again. I really like your piece, Mike. Sounds like Lord of the Flies, only this time the adults are on the receiving end.

For another Neighborhood piece, and a short-short, check my blog, due up next.

Fun story Mike, I also tried to imagine you dressed up and riding the bike! Sounds like Florida might be more fun than Oregon for Halloween:)