Musing on Halloweens Past 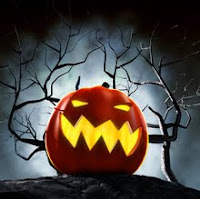 'Halloween is coming!
Guess what you may spy…
Jack-o-lanterns dancing
Witches in the sky!'

Oh, the wonders of Halloween! As a child I was blessed with imaginative and fun-loving older siblings who made Halloween a deliciously scary holiday for us kids. It would start at the beginning of October with us ransacking the back of closets and trunks in the basement for the perfect costumes. It had to be something different every year.

And trying out the make-up! A little girl’s dream. It was the one day out of the year we were allowed to wear it. I was very young, remember.

The excitement would build every day as we carved pumpkins and listened to the ‘Haunted Mansion’ record over and over. My sister would whisper ‘Little Orphan Annie’ stories in our ears. Shivers of

delighted fear ran down our spines.


I dreamed of the candy we’d gather, spreading it out on the living room floor in a wave of color to make sure it was safe to eat. We’d then do the big trade for our favorite ones.

Finally, the big day would arrive with its long hours at school. The rushing home and trying to eat dinner, when all we wanted to do was put on our costumes and go!

Oh, we lived in the perfect neighborhood! Ours wasn’t the only front lawn converted into a graveyar 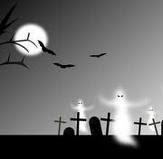 d and had haunting music playing at the door. Houses perched on little hills with long steep stairs to the doorway. The whispers of other children hidden by the bushes of neighboring houses added to the eerie silence. The cool night and the smell of pumpkins and caramel corn on the air were so chillingly delicious.

These delightful childhood memories are what brought me to write my little ghost story ‘Trials of a Lonely Specter’. I wanted to capture that delicious shiver of fear down the spine and the smile at the end of a successful haunt.


Trials of a Lonely Specter
MuseItUp

‘How does one tell a ghost he’s not really dead?’

Quinn frowned at the crumbling gate house of the manor, unsure of why Liam had brought him there. Then again, he shouldn’t be surprised by anything his partner did.

Quinn hushed the voice in his head. “I’m thinking.”

He jumped slightly when Liam materialized at his side. He tried to hold onto his annoyance but couldn’t stay mad for long when the other grinned in that attractive way.

The man threw an arm across his shoulders, waving a languid hand at the decrepit building. “Can’t you make up your mind inside? It’s getting dark.”

Quinn glanced behind them at the lonely driveway. He shivered when he saw the shadows creeping from under the trees. Shrubs overran the flowerbeds and weeds grew between the closely fitted flagstones of the walkway. He couldn’t understand why Liam always had to choose the scariest places to haunt.

“It’ll be darker inside,” he hinted to the apparition.

Liam slid his arm from his shoulders and sauntered up to the wooden door sagging on its hinges. He wiggled his fingers and a bluish light filled the house, spilling out from between the slats of the broken shutters.

“Show-off,” Quinn muttered as he joined him at the front entrance. The door felt solid under his hands. He gave it a nudge, testing its stability.

Watching him, Liam put his chin on his shoulder. “Give it a shove.”

He regretted the words instantly when Liam’s eyes flashed.

“I’m sorry. Don’t be mad,” he said, but Liam had glanced aside, hiding his expression. Quinn felt like a brute, knowing his friend’s manifestation had no substance. He took out his frustration on the door, putting a shoulder to it. He pushed, and stumbled across the threshold when the ancient latch unexpectedly gave way. Dust filled the air and he sneezed several times.

Liam swept passed him, his skin luminescent in the pulsing blue light he’d created. Quinn watched enviously as he crossed the hallway and glided up the swaying staircase. His own efforts to get an aura only resulted in dim blobs that people dismissed as figments of their imagination.

His friend’s glowing figure disappeared through the door at the top of the landing, and he hurried after him. His foot caught on a loose board as he entered the room and his dignity was bruised as he sprawled on his face. Liam’s amused laughter did nothing to help.

He climbed to his feet and stalked towards a mirror, the only item of furniture in the room propped against the wall. . He scowled at the mottled surface. “May I go home now?”
Posted by diannehartsock at 1:00 AM

Nice story. Reminds me of the broken down house we all thought was haunted when I was a kid. I wasn't afraid of it, but longed to go inside and meet the ghosts.

Thanks for stopping by, Anne. Don't you just love old haunted looking houses? I want to explore them all!

Ah the thrills of trick or treating. It wasn't ever my favorite holiday, but I did enjoy dressing up (often as a gypsy) and going trick or treating and eating ALL that candy. I do remember going on picnics in the summer and taking walks with my brothers and sister. Up a long hill sat a house covered in ivy. All alone,nothing else near it. No other houses in sight. My brothers told me and my sister it was the witches house. Every time we walked we got a little closer and then one of my brothers would say they saw something and we'd all run back to my parents. I wonder if that house is still there. I think I'll have hubby take a ride with me some day to see. Thanks for sharing your memories with us.

Hi Roseanne! *waves* We had a 'witches house' near our cabin when I was a kid, orange and black paint and all. Deliciously creepy! Only saw people in it once, and was afraid to go near for days afterwards. What if the witches saw us!?

Love your memories your recalling Dianne...sounds like you had fab childhood times. Great blog too...

PS The sky is blue... the grass is green...hope you have a happy halloween! The UK version! ha ha :) God Bless Dave

Thanks for coming by, Dave! Like most people, I have some great and some not so great memories. But overall, I wouldn't trade my life for anyones! :)

Dianne, that was so evocative! One of those posts that puts you in the setting the writer's created. Great job.

Thanks Gail! I had fun writing it. :)

Great excerpt! Enjoyed hearing about your childhood halloween experiences, and who can forget The Great Pumpkin:)

Diane, I lived in New York City and in Brooklyn we went Trick or Treating to each other's apartment houses. There were no lawns, only concrete sidewalks and we had to go door to door ringing each bell. We skipped the doors that weren't decorated and sometimes it was kind of spooky. So when we moved to the suburbs it was very exciting for me to be able to decorate our house and sometimes our lawn too.:) My daughters were able to have the true Halloween experience there, since they could go Trick or Treating until sundown and then it was scarier, because the big kids came out and started throwing eggs. In the morning you would see all the egg spots on the sidewalk.

Dianne, you've described a classic American Halloween, one I suspect no longer exists, sadly. I recall Halloween parties my parents threw for me and my siblings and cousins that involved scary stories, bobbing for apples, and other seasonal games. Too boring for today's kids, and such a shame. Thanks for sharing your memories!

Hi S. Durham. The Great Pumkin is the bomb!

Lionmother, we had a few egg-throwers in this area when we first moved in. But I think they must have grown up and moved away, because we haven't seen that in years.

*waves to Pat* I had parties like that for my kids when they were young. Sadly, they're all grown up in college! Guess I'll have to wait for the grandkids. :)

Thanks everyone for visiting!