I love parties and family get-togethers. My family uses any excuse to party -from birthdays, holidays, to family game nights. With six married children, fourteen grandchildren (4 of them with spouses) and one great grandchild, it’s always a large party. I'm hoping someone is planning a Halloween party. Haven't heard anything yet, but we often hold spur of the moment parties too. Here are a couple of good recipes from our past get-togethers followed by a story.


Some of us prefer pretzels to chips. Here’s a great dip to go along from my granddaughter's recipe collection. 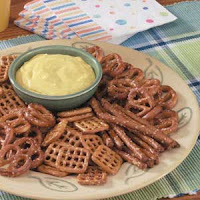 POTATO SALAD FOR A CROWD

My mother-in-law always made this for parties. Some think her secret is  the French Dressing, but I think it's in the home-made dressing.
5# potatoes cooked and diced
1 medium bunch celery
1# onions chopped
1 doz. eggs hard cooked and chopped
1 small bottle French dressing

Boil potatoes with "skins" on. Let cool and then remove skins and dice into nice size pieces.
Marinate potatoes in French dressing for several hours or overnight, using enough dressing to lightly coat potatoes (probably not the whole bottle)
Add remaining ingredients and the eggs last. Mix VERY CAREFULLY OR TOSS GENTLY with the dressing recipe. Sprinkle the top with paprika.

This is an easy cheese ball and so delicious. The combination of cream cheese and cheddar cheese along with the seasonings makes this a party favorite. My daughter makes this one.

Because of the time of year, I added this one for Pumpkin Soup. One of my personal favorites. It's great for these chilly Fall days.

Pumpkin Soup
by Roseanne Dowell
I served this on Thanksgiving often. It’s not sweet like pumpkin pie. Pumpkin is actually a squash. I’ve done it from real pumpkin as well as the can. Both are excellent.
3-4 cups mashed, cooked pumpkin – or 1 large can
1 T minced garlic
1 large mild (sweet) onion chopped
3 T melted butter or margarine
½ t. salt
Dash pepper
1 pint half and half (I use fat free)
4 T chopped parsley
Sauté the onion and celery in butter until tender Add the rest of the ingredients, except half and half. Cover and simmer 10 minutes, stirring occasionally. Put in blender – one cup at a time and blend until smooth. Return to pan, add the half and half and heat through. Serve warm. Makes 6- 8 small servings.

Here's a soup my mother used to make. Another one to warm you up on a chilly Fall day.


And now that everyone is well fed, a story.

Look for my books, Stranger on the Shore, Double the Trouble, Another Day, May I Have this Dance, and Connection of the Minds in the MuseIt Up Bookstore.
To find out more about me check out my website www.roseannedowell.com or my blog http://roseannedowellauthor.blogspot.com

Posted by Roseanne Dowell at 7:36 AM

Thanks for the recipes. Good to have tasty snacks for the end of the world.

Yummm---Your recipees sound delightful, especially the one for pumpkin soup. Getting to be that kind of weather here. Finally. I might have to try this in the next few days.

Love the story and now I feel very hungry! :)

Well this year Ro, I will be having that Thanksgiving soup and thinking of my darling and dear friend while I make it. Sounds wonderful.

Now Judgement Day was gripping. Lost my appetite there a little but it is a wake-up call. Your descriptive writing is a dream for any author to yearn for...I love the way you write.

As grim as this story goes, I fear it will be much worse. Most won't want to hear or think about it but death is a reality. I know which side I long to be on.

Love you Ro and thanks for all that you are.

Thank you for all your comments. I hope you all let me know how you liked the recipes after you tried them.@Karen, yeah, I'm afraid it's going to be a whole lot worse. Thanks for your praise and encouragement. That's not something I usually write.

I printed all the recipes. And the story was an absolute masterpiece. (If this shows up twice, it's blogger, not me!)

Thanks for sharing the recipes and the story. The imagery was quite vivid. You're a talented writer.

I'm glad you gave us the sustinance with your recipes before we faced our destiny in your visually gripping story. :)

Holy craps Roseanne - I had no idea you wrote horror stories. WOW...I was expecting a sweet love story (LOL)...I'm still breathless over the whole deal, plus hell's heat is suffocating (grins).

Nice recipes...and one heck of a story. You never cease to amaze me.

Thanks, Kay Dee. I don't write horror stories. This came to me after a lunch date with my sister and brother and we discussed donating body parts. My brother asked what happens at the end of the world because our soul is supposed to join our body. It just came about and I had to write it. It's the only horror story I ever wrote.

Holy cow! Why is a nice, sweet grandma who shares her tasty recipes writing a story like this?! Knocked me off my chair, Woman...Great images.