Hello Everyone!
My name is Mindy Hardwick and my young adult, contemporary romance, WEAVING MAGIC , is coming from MuseItUp in April 2012!
Halloween is my favorite holiday.  I love glowing jack-o-lanterns, the crackle of fall leaves, dark evenings, and the smell of wood-burning fireplaces.  But, I especially love the creatively disguised kids who ring the doorbell for Halloween treats!
In my novel, WEAVING MAGIC, there is a scene, in which, main character, Shantel, is trying to find a costume to wear.  She goes to the small town’s boutique shop with Cousin Mia to find just the right costume for her upcoming role as a Magician’s Assistant.  Shantel wants desperately to impress Magician, Christopher, even if that means finding a costume that is a little on the sexy side! Something she is not at all!
When I wrote the scene, I couldn’t help but think of my own experience with costumes!  As I child, I wore many Halloween costumes:  Casper the Ghost, a Smurf, and even a piece of juicy fruit gum. But the costume I remember the most was Pumpkin Box! 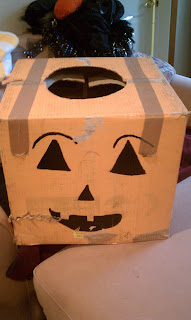 I was in the fifth grade and we had just moved to St. Louis from Champaign, Illinois. When it came time for Halloween, my Mom hauled out one of the many United moving boxes and said, “You could be a pumpkin.”
I eyed the box. A pumpkin was round. Not square.
“Don’t worry,” My creative Mom said. “We’ll put a little orange paint on it. Draw black eyes and a mouth. We’ll cut holes for the arms and legs, and you can wear the box with an orange shirt and green pants. It’ll be great!”
Painting the box and drawing the eyes and mouth turned out to be fun—wearing the costume was not!
The day of Halloween, Dad dropped me off at school with my large box. When I got to the classroom, the teacher frowned and mumbled something about setting the box in the corner until the party.
When it was time for the party, I watched as all my female classmates gathered up long black witch skirts or pretty princess dresses and headed for the bathroom. I was left behind with the boys. I didn’t need a bathroom mirror to step into my box.
“What’s that?” One boy pointed toward my large, orange box in the corner.
“My costume,” I muttered. I wished I could crawl into the box and disappear.
I waited until the girls came back from the bathroom, and everyone was busy oohing and ahhing over costumes, before I stepped into the box. The box was clunky, and once I was wearing the box, I couldn’t sit down or move too well. I had to stand in one place until it was time for the parade.  I was miserable and only wanted the day to end.
When I got home, I tossed the box into the corner and told Mom I was making a different costume for trick-or-treat. I was done with the Pumpkin Box!
Upstairs in my room, I quickly assembled a witch outfit that looked like the girls at school. I slipped into my gymnastics leotard, found a short black skirt, and wore black tights. A friend came over with an extra witch hat to match hers, and off we went into the night to trick-or-treat. The Halloween Pumpkin Box was left behind.
After Halloween, the Pumpkin Box was moved to the attic where it sat for the next ten years, acting as a storage box for Halloween costumes. When Mom remarried and moved to Rochester, New York, the Pumpkin Box was sealed with the costumes and stored in the new house.  And when she moved to Seattle, the box moved with her.  By this time, the box was beginning to fall apart and needed a lot of heavy packing tape to keep it together. 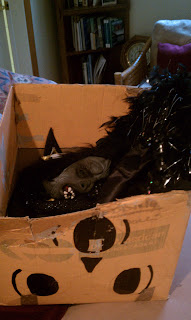 I never wanted to think about the Pumpkin Box again.
And then, one day, years and years later, when I was an adult and handing out Halloween Candy, I opened the door to find a young man wearing an Amazon box on my doorstep.  “What do we have here?” I asked.
“I’m an Amazon package,” he said, and reaching in to his box, he grabbed a handful of green disposable Styrofoam peanuts and scattered them all over my front porch.
And suddenly, I remembered that Pumpkin Box and my fateful fifth grade class. I remembered how badly I wanted to be like everyone else.  I remembered how that pumpkin costume had screamed what I was trying so hard not to be in my fifth grade class—an outsider.
But, looking at that young man in his Amazon package, standing on my front door in Seattle, I realized that the Pumpkin Costume had, in fact, been a very creative costume and it was okay not to be like everyone else.
Happy Halloween!
Mindy Hardwick
Website: www.mindyhardwick.com
Facebook: https://www.facebook.com/weavingmagic
Twitter: https://twitter.com/#!/mindyhardwick
Posted by Mindy Hardwick at 12:00 AM

Mindy - what a great story! Growing up and fitting in is such a difficult process,and having to wear The Pumpkin Box at Halloween couldn't have been easy. You've really pegged the feelings of that time. Can't wait to read your book, because I know it's going to be awesome!

Growing up--sometimes it's a hard lesson to learn to feel comfortable being who we are, even if it means being different. And, isn't it a wonderful feeling when we realize it's okay to be one-of-a-kind after all? Enjoyed!

You might have hated the Pumpkin Box, Mindy, but we have to give your Mom points for creativity. Your experience brought back memories of being the new kid in the fourth grade and trying desperately to fit in. You captured the angst beautifully. Nicely done!

Hurray for creative moms, and for not being like everyone else!

Great story! I don't remember too many of my halloween costumes. I do remember dressing as a farmer one year and as a baby another year.

Thanks all! My Mom and I dragged out the pumpkin box so I could take the pictures for the blog post. It's the only costume that survived all these years!

Great Information sharing .. I am very happy to read this article .. thanks for giving us go through info. Fantastic nice. I appreciate this post. and thank you for sharing an amazing article…
The Custom Packaging Boxes Wholesale
Custom Boxes Wholesale
Business Cards
Mailer Boxes

It is very informative i like it very much keep it up.
Macaron boxes