Things That Go Bump in the Night! A Halloween Fairy Tale 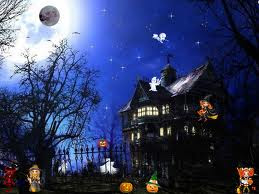 Once upon a time two girls got ready to go trick or treating on Halloween eve.

"Oooh you look spooky," Lisa's friend Carol said to her.

Lisa opened her mouth so Carol could see her teeth. "See, now I'm really a vampire."

Both girls laughed. Carol had dressed as a ghost, so all Lisa could see was her eyes and mouth. Carol had on a white sheet with cutouts so she could see and talk. Lisa wore a full length black dress of her mom's. Her eyes jumped out since Lisa had outlined them in dark black eyeliner and dark eyeshadow.

"Let's go Trick or Treating. It's still early and we can get home before it gets too dark. Remember last year?"

The year before both girls had been out too long and before they knew it all the older kids were surrounding them and started throwing eggs. They ran, but they got home all spotted with dried eggs. This year they were going earlier so they could escape the older kids.

"Trick or Treat," both girls screamed as they got to the first house. They rang the bell again. No one answered. Suddenly the air became thick, like fog was coming and there was a strange sulfurous odor.

"You're acting like a baby, Carol. We've only started and you want to skip a house? "

"No, well, yes!" She started down the steps. Just then the door opened and someone shouted, "You there, what do you want?"

"Trick or Treat," Lisa managed to get out as she turned and caught what the figure looked like. It sounded more like a whisper, though.

"Speak up, what do you want?" Lisa peeked again and saw it was an old man standing there.

"Trick or Treat," Lisa tried again and Carol stepped up a few steps to get back on the creaky porch.

"Go away, pesky kids. Nothing here for you. Scram! Get off my porch!!!"

The girls ran as fast as they could and when they looked back the man was still standing there with a wild expression.

"Let's try another house. It has to be better!" Lisa took Carol's arm and they walked to the next house.

As they approached they heard a noise, like a screeching cat, coming from inside the house. Then it stopped immediately and another low moan began. They crept up and rang the doorbell. No one answered.
The moans continued and then the door opened.

"Hello, girls. Glad you were able to drop in," a black clad tall figure said. They couldn't see its face, because a black hood covered it.

"Trick or Treat," Lisa managed to get out. She wanted to run away, but she tried to be brave.

The figure came back with a basket and told the girls to pick from it. Lisa stuck her hand in and felt squishy things, not candy. She pinched something and brought it out. "Yuck, what is this?"

"How lucky, my dear you found a spider. The juicy ones are the best."

Carol looked at it and screamed. Lisa screamed too and dropped the spider. The black clad figure started laughing a low rumbling laugh. "Ha, ha, ha, ha, fooled you didn't I?" Then the figure brought out another basket and this time gave each girl a candy bar. Both looked at their candy wondering whether to eat it or not.

"Thank you," both girls gulped out and ran away.

The figure laughed and laughed.

"These people are weird on your block, Lisa. I hope we find someone nice soon." The girls walked on and  with each step they felt a strange wind moving them forward. Soon they were at the third house and each girl looked at the other.

"Should we try again?" The girls went up to the door, rang the bell and yelled "Trick or Treat!"

"Whooooo, whooooo, the spirits are out tonight. We love little girls, plump and succulent. Yummy!!!" Just then someone opened the door and a cold wind blew from the inside of the house. Before they could leave it sucked them into the house and finally left them in a dark cold empty room. Soon a door opened and they were face to face with a creature they had never seen.

They stood there like statues. "We have to run, Carol. Can you do it?"

Carol nodded her head and the girls tried to back out of the room.

"Not so fast, you're not going anywhere. It's Halloween and it's time for me to feed." Suddenly two bony arms came out and grabbed both girls at once!!

"Ya, ha, ha, ha, ha," the bony creature howled. The girls couldn't move. Then Lisa kicked the creature in the stomach. At least she thought it was her stomach, because it growled.

"You're not getting any of us, you bony thing." Lisa ran when the bony monster let go and so did Carol. The girls ran out of the house and kept running.

"I'll get you," Bonella screamed from the doorway. "You'll be sorry!" She rattled her bony body and scraped her claws, but the girls were too fast and they got away.

Lisa and Carol decided to go back home. "Lisa, remember we wanted to go early so we'd be safe from the older kids? Whew, we just escaped being eaten by a strange bony creature. What was her name, Bonella?
Where did she come from?"

The girls laughed and went back to Lisa's house where they stuffed their faces with leftover Halloween candy and lived happily ever after.

Take that BONELLA!!! I wrote a story where you didn't win!!! 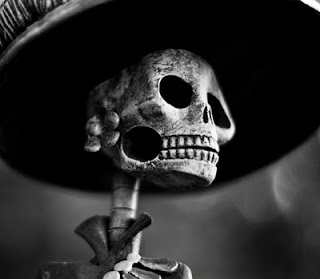 I'm not afraid of your bony body or your claws!!!
Posted by Barbara Ehrentreu at 7:04 AM

You know there will be a backlash from Bonella, right? Listen for rattling in your walls at night. You'll know who it is.

Way to go, Barbara. I have a feeling Bonella's going to lose a lot this year. Great story.

Bonella has a HOUSE? Oh My. No wonder she manages to pop back into Museland every now and then and try taunting us again.

We need to find a really good witch doctor who can device a potion to sprinkle all over Boney's house and turn it back into the crypt she's suppose to stay moldering away in. Someone with an awesome sounding name like Magwamboumboobu.

Fun story, Barbara. I loved your spunky young characters, and I cheered when they escaped Bonella. I hope you do too!

Funny lady Barbara. Got Bonella on the hop, hehehe. That'll teach the old waste of bones to poke fun at Musers. The pen is mightier than the sword, as they say. Stick it to the boney one.

Gail, I'm not afraid of Bonella. Tomorrow is Yom Kippur and I'll be free of her. A higher power is protecting me I hope:)

Anne, thanks for the warning! I'm still not worried about that bony bag.

Roseanne, thank you so much! I wanted one you could read to the little ones.:)

Lin, yes, found it on Google! There's picture of it on top of the blog. Brave kids, don't you think? Thank you! My muse just popped it out. You know how that goes!

Pat, thank you! I enjoyed writing it and I wanted to make them spunky so they could go up against that nasty Bonella. So glad you got into the story! I'm not worried about escaping, because I have all of you here to protect me, right?

LOL! I like your story. The Bag of Bones lost to a couple of kids. No little children for her she'll have to make do with the candy.

Nancy, thank you! Yes, she made me so mad when she started going after us. You know she will be back, but for now a good swift kick in the stomach will slow her down!!

Okay Darlin' What a delightful story you told and you are sooo messing with fire. However, can I first just say, yuk! Spiders? Creepy. And they stuck their hand in it? I'm sure I would have been retching by that time and heading for the nearest root-beer bar.

As far as repercussions from Bonella, my advice would be:

BE AFRAID, BE VERY, VERY AFRAID.

Sweet kids. Trick or Treat. Creatures and Bony skeleton, Bonella. All the elements we need for a fun Halloween story.
I do not like spiders, but I thought they were putting their hands in a bowl of eyeballs and brains....yewwww....Thanks for the treat and hope you tricked up Bonella!

Enjoyed the story, Barbara - especially after hearing so many scary things about Bonella!

Fun story, Barbara and perfect for October and Halloween!

Jenna, thank you. I'm glad you liked the story. Yes, Bonella gets her comeuppance here.:)

Karen, glad you enjoyed the story! It's an example of what I do best - write from the top of my head. I don't care if Bonella doesn't like it. I won't let her bother kids. I put my foot down as an author.:) You know those spiders weren't real - just the gel kind.

JQ, so happy you liked the story! I liked writing it. What Halloween story would be right if it didn't have creepy things in it?

Rosemary, so happy you liked the story. Yes, Bonella has some ugly parts to her!

Penny, thank you so much! It was fun to write something different for a change.:)

Thank you all for coming over and supporting me with Bonella. I wasn't on for a whole day and I worried she might have done something, but so far you guys are protecting me!!!

Ha! What a great story! and finally, someone 'got' Bonella. But...I hear she's very angry. In fact...Whoops, hold on, what is that strange knocking at my door? I'll go see...Oh, no! Bonella,wait! It wasn't even my story! No! Aaaahhhh!