by John B. Rosenman 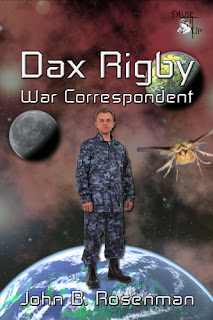 Christmas, Thanksgiving, and other holidays are fine, but for me, nothing matches Halloween’s particular magic. Maybe it’s because Halloween is basically silly and inspires gruesome, scary, and at the same time, funny and over-the-top flights of the imagination. When I was a kid, we celebrated it on two nights. One was at school, where a demented adult screeched “Brains, Brains!” as I stood in a dark cloakroom and reached blindly into a pumpkin, finding something jelly soft and squishy. Eeeeewww!

The other time we celebrated the Night of the Dead was of course when we went out trick or treating, at first with our parents, and then later, as semi-grownups proud of our elite status. That night was the best of my life. You never knew what you would find at the next house, with its orange, glowing pumpkins, hanging skeletons, and creepy, ghostly music. Perhaps when you rang the bell and the door opened, the most amazing thing in creation would greet you, something beyond description that you would never forget.

Hence this love bite, “Trick or Treat,” which was published separately and also as the introduction to a novelette, “The Lazarus Trick,” in an appropriately long-dead magazine called Bifrost.

Hope you enjoy it.

Tommy looked at Mark, who like himself was carrying a bag stuffed with candy, the reward of visiting 69 houses this Halloween night.

“Like somethin’ so scary it’ll make the hair stand up on your head, that’s what!”

“That depends,” Tommy said cautiously. Mark was spooky, unpredictable, and always got into trouble. Both Tommy’s parents had warned him to stay away from Mark. Why, if they knew…

Nervously, he followed Mark up yet another flagstone walk and watched while he pressed the 70th doorbell of the night. Beneath his pointed Peter Pan cap, Mark’s impish face glistened expectantly in the moonlight.

The door opened and a kindly, white-haired woman gazed down at them. Somebody’s grandmother, Tommy thought in disappointment. Probably gab or ears off and give us a piece of gum. Or even worse, Sour Tarts.

Tommy adjusted his Batman cape and raised his bag. “Trick or treat!”

“Trick or treat, you say?” The old bitty practically went into conniptions at that, hugging herself and doing a little jig. Then she pointed a finger at them.

“You just wait here. I’ll be right back.”

Tommy watched her fade down the hallway and nudged Mark. “C’mon, let’s split. We ain’t gonna get nothin’ out of her.”

“Oh, yes we will.” Mark winked at him and Tommy thought of witches and goblins. Come to think of it, when Mark had first moved into the neighborhood, he’d been quite popular. Now for some reason kids avoided him. Tommy himself felt torn. Part of him liked Mark a lot. It was as if the boy had some hold on him. Yet, at the same time, Mark scared him a little, and he’d thought often of ending their friendship.

Footsteps. The old bitty was coming back. He saw a chipped bowl full of peaches thrust forward. Half of them looked rotten. Disgusted, he reached to take one.

She snatched it away. “Nooooo, you don’t!”

"Do a trick first. That’s the rule! Least it was when I was a little girl.”

A trick?” He looked at Mark in confusion.

Mark smiled. “What kind of trick would you like, lady?” he asked politely.

“Oh, something clever. Surprise me!”

“With the greatest of pleasure.” Mark grinned and something happened in his dark eyes. He pointed at the bowl. “Hershey bars!”

Tommy blinked. The old woman’s bowl was filled to the top with Hershey bars, the half-pound size that cost over two bucks.

The old woman looked at the bowl in disbelief. “Now where did they come from? I could have sworn I brought peaches.”

Sores appeared on the old woman’s face. Some of them burst and began to run. She dropped the Hershey bars and clasped shriveled hands to her cheeks. One of the fingers fell off.

Screaming, she rose and shot through a doorway. Through a front window, Tommy could see her whirling about the living room, occasionally banging into walls.

He tried to speak, but he couldn’t. Horror filed him like ice water.

In the house the woman’s screams rose and fell. Tommy heard a thud. Then more screams.

He swallowed, surprised he could. “What—what are you…”

“Going to do next?” Mark contemplated the moon. “You know, maybe I’ll turn her into an animal, like a skunk or pig.” He grinned. “Or maybe I’ll even make something up, something wild that no one’s ever thought of before. Something that’ll blow your mind.”

Now the hair rose on his scalp just as Mark said it would. “No! Stop it, please!”

“Oh, all right. If you insist.” Mark pouted and looked into the house. The woman swooped out of one of the rooms and for a moment was just as Tommy had last seen her: disease-ridden and terrified. Then she was unblemished, standing before them again with a bowl of overripe peaches.

“Thank you.” Mark picked one, rubbed it on his sleeve, and took a bite. The old woman started to collapse.

The old woman blinked, straightened, and held out the bowl. “Have another, son,” she smiled. “Take all you want.”

“No thanks.” Somehow, Mark had finished the peach and tossed the pit over his shoulder. Jauntily, he hooked Tommy’s arm. Tommy felt himself being escorted back toward the sidewalk. He looked down at his bag, surprised he was carrying it. It was filled to the brim with half-pound Hershey bars.

He gasped. This was mad—crazy! How could Mark do this, and what was he, anyway? Though stunned, he knew he’d finally had enough. He should have listened to his parents long before this!

Abruptly, he stopped on the walk to tell Mark they were through, that he wouldn’t be seeing him anymore.

Mark grinned, eyes gleaming in the moonlight. “Yeah, Tommy, what is it?”

He swallowed. “Uh, maybe it would be better—”

Suddenly he heard shouts. Turning, Tommy saw half a dozen small kids come running up the walk toward them—all eager, it seemed, to get some of the old lady’s peaches.

Mark laughed when he saw them, and moved to block their path. He raised his hands above them like a magician about to conjure.

“Say, Tommy,” he said with a wink, “now would you like to see something really scary?”

Now, that's a proper Halloween story--leaves you wondering what happens next. Loved it!

Thanks, guys, much appreciated. Glad you like the tale. And Anne, thanks for downloading Dax. I hope you like it.

Thanks again, fellow scribblers. I'm glad you like it.

Ohh, that's neat. Great story. I'll have to remember that one to tell my fourth grade granddaughter. She loves stuff like this.
PD