Fantasy World, Real World, or Both?

Bad Spelling: A klutzy witch, a shaman's curse, a quest to save her family. Can Kat find her magic in time? Released October 2011 http://tinyurl.com/DasefBadSpelling
Midnight Oil: Shipwrecked on a legendary island, how can a witch rescue her boyfriend if she can’t even phone home? Releasing January 13th! http://tinyurl.com/6wswbsf
Scotch Broom: A magical trip to Stonehenge lands a witch in the Otherworld where an ancient goddess is up to no good. Releasing April 2012 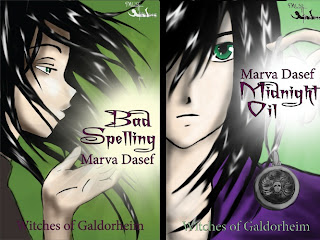 The Characters:
The young witch Katrina,  Kat to her friends, is the star of the series; slowly finding her magical abilities while she searches for her father's family in Siberia. Her brother, Rune, has a different father, a vampire living in the Carpathian Mountains. As half warlock and half vampire, he has a double dose of abilities. The magic of the warlock, and the speed and strength of the vampire. Kat is totally jealous.

Their mother, Ardyth, was hand-fasted with Kat's father, but he got himself frozen into a glacier soon after  Kat was born. Because new blood is always needed in the community to avoid inbreeding, Ardyth travels to what she believes is another coven. The former witches and warlocks there have been turned to vampires, but Ardyth doesn't learn this until Rune's father attempts to have a "taste" of her blood. By then, she was already pregnant with her son.

Aunt Thordis is the head witch of the island. She handles all the community's administrative affairs  with a somewhat iron hand.The other witches appreciate her abilities as both a powerful witch and highly competent administrator. In other words, nobody else wants the job.

Mordita prefers to be called a Sorceress and doesn't care to socialize with the others on Galdorheim. By chance, she becomes Kat's friend and a valuable ally. There's more to Mordita than meets the eye.
The Settings:
The Witches of Galdorheim series has both a real and fantasy world setting. Sometimes the fantasy world is hidden by magic within the real world: the witches' home island or the Hall of the Mountain King. Other settings  are places of myth and legend: The Otherworld of Celtic myth or Atlantis of legend.

BAD SPELLING begins on an island in the Barents Sea, north of Norway. It's a small island populated by the descendants of witches who escaped from the Inquisition by heading north, and not stopping until the reached a deserted glacier-covered chunk of land to call their own. Galdr is an old Norse word for spell or incantation, heim is a common Germanic place name meaning home.

I created the witches' home in a very inhospitable part of the world. I also mention a couple other arctic islands to let the reader know that it wasn't Kvitoya or Svalbard, islands used in The Golden Compass series.

The witches use a sustained spell to maintain a dome over the village. Outside, a glacier running down to the sea helps keep out unwanted visitors. The dome can be seen by the witches, but mundanes (non-magical) people only see more glacier. By all appearances, a very inhospitable place.

The witches don't keep to themselves entirely. Every Spring, they send a small cargo hauler to the northern shores of Norway. They trade various slightly magical charms and potions for more practical items like DVDs for their 52" flat screen TV. They also keep in contact with witches and the troll nation the rest of the time by albatross mail. 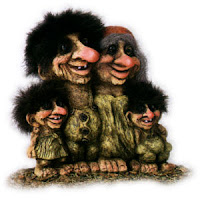 Speaking of the troll nation, the Hall of the Mountain King is another magical place within the real world. Again, the magic realm is hidden from normal human eyes. King Ole reigns in the Norwegian troll kingdom. His brother, King Olaf, rules in another Hall on the eastern slopes of the Ural Mountains in Russia. Many years before Kat's aunt Thordis had a close relationship with King Ole. However, they decided it wasn't meant to be. Any non-troll living in the troll kingdom slowly turns into troll form. Thordis didn't care for the idea of changing her form and King Ole had a realm to run. They still hold great affection for each other.

In BAD SPELLING, the other important area is purely mundane. The Sami tribe of Siberia are Kat's father's side of the family. She wants to find them and, with the help of Rune, the trolls, a six-pack of werewolves, and a few others, she makes it to the northern end of the Ural Mountains.

In MIDNIGHT OIL, Rune visits the real island of Novaya Zemlya. During the Cold War, the Soviets tested nuclear devices on the island. In my book, I use that real fact to explain why the island has mutant Nenets tribesmen: Radiation!
In SCOTCH BROOM, the siblings end up in the real Scotland, but in the other-dimensional Otherworld of Celtic legend. The Otherworld is sort of located in the Highlands. I say 'sort of' because it's not a place you can see (unless you're a magical being). Over the centuries, many fey, kelpies, unicorns, and other arcane creatures of the world have entered the Otherworld to live their lives in peace away from human influences.
﻿
The Otherworld creatures can come and go as they please, but it takes a lot of runic spelling to enter if you're not a permanent resident. Be especially careful if you do stumble into the Otherworld. You can visit, but if you decide to stay, then somebody already in the realm has to die. It's the epitome of a 'nice place to visit, but I wouldn't want to live there.' 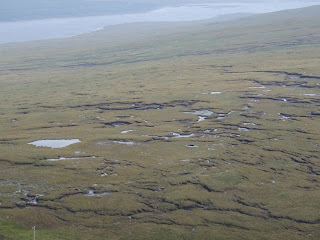 To mundanes, the Flow Country (within which the Otherworld exists, but in a different dimension) doesn't look very inviting. All to the benefit of the residents. They don't want a bunch of tourists stomping around their area. Would you go hiking in a place that looked like this? You could sink out of sight in the swampy land, before you could holler for help.

I hope you'll visit the Otherworld, but please do so from the comfort of your own home reading about the denizens with your copy of SCOTCH BROOM when it releases this Spring.

NOTE: Midnight Oil releases on Friday the 13th. Visit my blog at http://mgddasef.blogspot.com/ for the book tour schedule and additional information.
Posted by Cellophane Queen at 12:00 AM

Adventures galore here, Marva. What a great job of world-building you've done! Looking forward to reading these, from the comfort of my own home :-)

I just loved them. Saving them for my grandkids now. I'm sure they'll get a lot of joy out of reading them.

The devices you come up with in these stories still astound me. What an imagination.

Boy, do I ever ramble on! Well, most of that is because of the large font. Really!

Thanks, Pat and Lorrie.