Hello everyone! I’m Julie Jansen. I write science fiction and horror usually with a comic twist.
Just before Christmas, Muse It Up! released my short holiday science fiction story, Santa’s Bones.  And what a wonderful group of people at Muse It Up!  A big round of applause for all of you!
So here we are, almost in February, and I’m going to talk about Santa. Because any time of year is good for Santa! We forget about the man for most of the year, right up until Black Friday, but he’s still there, lurking about the North Pole, at least until the North Pole melts and Santa catches a strange tropical disease. That’s what brought about Santa’s demise in my story anyway. 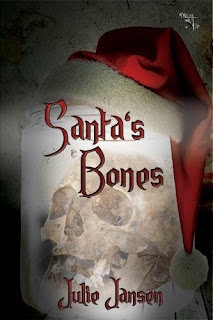 I’d never written a holiday story before Santa’s Bones. The idea came to me one day after reading an article on climate change: the oceans rising, new species surviving on parts of the planets they couldn’t tolerate before. It happened to be Christmastime. My little nieces were running around, excited about Santa coming and all the presents they’d find under the tree Christmas morning. My mother was complaining about beetles she’d discovered chewing away at the wood of her antique hutch. And we were all wondering whether my Mom’s ghost would make an appearance during our time at her house during the holidays (the ghost loves to play tricks at Christmas for some reason).
Watching my nieces, I remembered how excited I used to get as a kid, waiting for Santa. I’d watch for him in the sky and swear the lights of planes or satellites were Rudolph and the other reindeer pulling the sleigh. I tried to think about when I stopped believing in Santa, the time for me that Santa “died.”
I couldn’t quite pinpoint a day I stopped believing in Santa Claus, but in all honesty, it made me sad thinking about it.
I wanted to feel the excitement my nieces felt. So I wrote Santa’s Bones. And you know what? In writing that story, a little Christmas magic came back.
Even though I kill Santa in the story, he’s reborn (I think I gave away a little part). Because Santa’s Christmas spirit never really dies, even when we become adults and have to set our Barbies, GI Joes, and marbles aside to make room for retirement plans, mortgage payments, and dental bills. Santa’s always there, lurking about, and that magic can grow if we open our hearts.
I don’t know if I’ll write another Christmas story, but writing this blog made me start thinking about St. Valentine. Maybe a science fiction Valentine’s Day tale will be next in the works!

Julie Jansen
Posted by MuseItUp Publishing at 8:15 AM

I think a Valentine's Day might lend itself very nicely to a sci-fi story. I'd say go for it!

We'll be waiting for it, Julie! Main character gonna be Cupid?