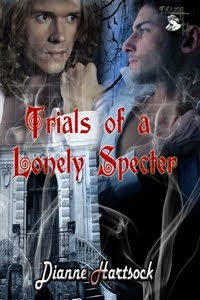 Happy New Year! I’m Dianne Hartsock, one of the lucky authors here at MuseItUp. As I’m writing this, I’m thinking back to a year ago. I was probably sitting at the keyboard like I am now, chin on hand, debating whether or not to hit the send key and whisk Trials of a Lonely Specter off to Lea. I’m so glad I did. That was the first story of mine to be accepted.

Keep in mind, I’d never had anything published before, and my confidence wasn’t at its highest. But if I’d learned anything raising two energetic kids, it was patience and stubbornness. I was going to keep submitting and filing away those rejection letters until my hands were too arthritic to type. Then I’d probably hire someone to transcribe for me.

I wish I could tell you there was a magic formula to follow, do A then B then C, and you’ll be published. But it just doesn’t work that way. I’ve been submitting for years. This time last year I was putting the finishing touches to my paranormal/thriller novel ALEX before submitting to Solstice Publishing. The previous year, this same story was set to be released with another publishing house, but they filed for bankruptcy along with the many other small publishers we lost that year.

I have to admit I was heartbroken. I’d been trying for so long! I got the ‘dear John’ letter one month before the release date. I wanted to give up. But after a few days of grieving, I opened my computer and started looking for a new publisher to try. I found Solstice and several other places that accepted that genre, and my story now has a home.

Even as I dotted the last ‘i’ and mailed ALEX off, a scene kept playing over in my mind. At one point Alex is at an art festival in the park. He’s looking at some sketches from local artist

s when he glances up and meets a lovely set of amber eyes. He blinks as a jolt of electricity passes between them.

Do you see what I’m doing here? I didn’t stop with one story, working to get that one published. I write one and send it out. I write another and send it out. When one’s rejected, I go back over it, searching for what was missing. I rework it and try again.

So here I am at the beginning of 2012, with four stories and one novel published, and two romances coming out soon. Do you think I’m done? No way! I promote these stories EVERY DAY. I socialize with readers EVERY DAY. And I work on my current WIP, yes, every day. I’m also a full time floral designer with a husband and two college age children. The only way I’m managing is by using a day planner. I keep track of my blog tour dates and meet the deadlines for interviews/blogs. I meet the timelines set by my editors. And I priorities. Family first, creative writing second, promos third. And I’ve gotten very

But you know what, there’s nothing else I’d rather be doing with my time. I think the only way to survive as an author is to love what you do. And I’m head-over-heels. Seeing my name on a beautiful book cover is one of the most fulfilling things in my life.

Thanks for stopping by! Feel free to contact me with any questions.

I enjoyed your post; it was quite interesting. I'm glad you didn't give me; you are doing something you love and enjoy and we are enjoying your results!

'head over heels'..we have to be in love with our work to proceed. Thanks for sharing your journey with us, Dianne.
Warm regards,
Christine London
www.christinelondon.com

Thanks Tracey and Christine for stopping by! Yes, it's work, but nothing's better than the excitement of starting a new story.:)

Dianne, you are a lesson in patience and strength! Something I've heard often is, don't even ask a writer how his or her career is doing until the ten-year mark has passed. It takes that long for us to find our little niche and cling there. You're doing an amazing job. Thanks for being such an inspiration. :)

Hi, Dianne. Your story sounds familiar. I'm a bit further along but went through pretty much the same trials you have. My first publisher went belly up exactly a year after my book was released. Then I got a contract for another book with an RWA approved publisher, only to see her have to quit the business before my book had even been edited.
Then I met, online, Lea and my fate took a leap forward. She edited and saw to the publication of a trio of books before going off on her own. I followed, and I'm glad I did. I now have ten books published by four publishers and an eleventh due out this month.
Perseverance, persistence, annoying foolhardiness, whatever you want to call it, it works. If, and its a big one, your work measures up.
Fortunately for you and for me, our work does measure up, and it becomes a bright shiny world. I've read Alex and it is one scary read. Keep up the good work, my friend!
PD

Yes, a familiar tale for all of us. I wish I could juggle as well as you, Dianne. I feel like a piker trying to do everything at once. It always seems my writing takes last place to everything else that must be done in life. I wish I had the energy I had only ten years ago.

You have come a long way. I wish you continued success and good juggling.

Congratulations, Diane. I'm can relate to your story and I definitely feel your excitement. This is only the beginning. Best to you in the new year and yahoo for your career.

Congratulations, Diane. I find writing everyday uplifting. Sometimes I trash what I've written that day but I wrote. I hope 2012 continues to present you with many more sucesses. Marian

Thanks everyone for your kind words and support! Even now I have notes in my pocket for a new story. Can't wait for a day off work!

Congratulations Dianne, you have your priorities in order and you know how to juggle. You can't lose with an attitude like that. You'll have much success in 2012 - that's a given.

Thanks, Wendy! Looking forward to reading everyone else's stories. :)

Oh, Dianne! Yes, all of us attest to all of it and laugh at the public's conception of being a writer. I mean, you just write something and get it published, don't you? Bless their souls, I think that's one of the things that fuels us and turns us into little trains that can. Or at least go to our graves having never stopped trying.

'little trains that can' Perfect description, Gail! Thanks for the smile. :)